Aaron is doing well, so well.  Two years ago, I wouldn't have believed this was possible.  Some signs that he's doing much better than was expected:
There's a lot going on here in the next few weeks.  I'm getting everything together because we have our 6-month check-up at Primary's tomorrow with pulmonology, ENT, and special needs.  I'm hoping we see wound care team as well, because his g-tube sore is just not healing.  That sore has been there since May '11.  Yeah, over a year.  It doesn't bother him at all, but it really bothers me, especially when it decides to bleed.  We'll also touch base with the dietician, and may change his calories again, ugh. 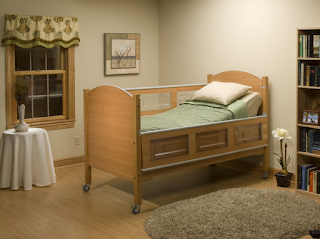 Another exciting development is that he's been approved for his special bed.  The bed will raise and lower at the head, knees, and feet.  It will also raise and lower as a whole component, making taking care of him much easier!

I've been gearing up to fight for this one.  Many people have told me it takes months of appeals and so on to get this approved. Ours was approved on the first try.  I'm told it may be here before Halloween!  So glad to get what he needs.  This will be much safer for him when sleeping, and will let him move around a lot more when he's awake.  Somehow, he doesn't like trying to roll uphill in his crib.  As he moves more, he'll develop more muscle strength.  This will also translate into better health for him.  It just keeps looking brighter and brighter.

Anyway, I'm also scheduled for surgery on the 24th on my shoulder.  I'm trying to get everything done for him and also manage all the other kids appointments and activities as much as possible before then.   There are a lot of changes in the works for us.  I kinda figure I'll be able to sleep after the surgery when I can't do anything else.  I hope it works out that way...

“I believe that no concern of ours is too small or insignificant.  The Lord is in the details of our lives.”
President Thomas S. Monson
Posted by CompatibleWithJoy at 1:31 PM