Santa Claus is Coming to Town! 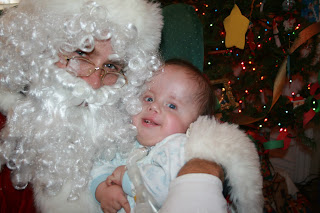 I love Christmas.  I love it ALL!  In all my (many) years, I think we can count on one hand, with fingers left over, how many times I've actually slept on Christmas Eve. Not because I'm still working on things, but because I'm too excited.  Even when it was just William & I, I woke up early and woke him up because it was CHIRSTMAS!!


This year I've had a harder time getting into it.  I've felt the lack but didn't know why.  The house was all decorated, I tried playing the Christmas tunes.  But my heart just wasn't there.  The last two years, I took the kids to a local assisted living center where, I kid you not, they have the very best Santa I've ever seen.  I hadn't seen anything about it this year, so I called them on Friday.  Yes, they're doing it.  On December 13th, Aarons 18 month birthday, and also the day I leave at zero-dark-thirty to fly back East.  No, I don't think anyone else is comfortable trying to haul Aaron around.  William has a joke about that.  He asked the kids how many people it took to load and unload Aaron.  The answer is 5:   Mom to do it and four more to stand around and watch her. 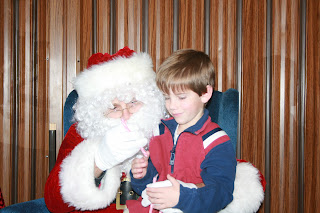 So obviously that wasn't going to work, and it further dampened any Christmas spark.  Alpine City was having the Jolly Elf today at City Hall.  But the weather is really cold, and kind of iffy.  And I'm worried about having him out there being exposed.  Then a miracle.  Really, just a tiny one, but just what I needed.  This morning was our church Christmas breakfast/party.  I think Santa has been around for a few, but only rarely.  But yesterday, in the reminder e-mail was a hint that a special visitor would be showing up.  I called the person in charge and yes!  He was going to be there.  Would it be possible to arrange a special visit?  Maybe...  And I started to feel the Christmas spirit.

To continue it, at the breakfast, I found myself at a table with the couple who had all the "inside" info on our visitor.  I mentioned that we really hoped that perhaps Santa might have a minute to stop by and see Aaron and was told that he was already planning on it.  After breakfast, Santa came in and the program was "Teach the Children," another favorite of mine.   Then he spoke with each child who wanted to visit with him.  Michael was the only one I could talk into going up to see him.  They spoke very quietly.  I thought I heard him telling him his little brother was at home and could he come over.

Then, about 15 minutes after we got home, the doorbell rang.  And Aaron was awake and happy!  I loved seeing him in Santa's arms.  And he loved playing with the candy cane Santa brought!  And the Christmas spirit came rushing in.  It's here.  I can feel it.
Posted by CompatibleWithJoy at 9:03 PM