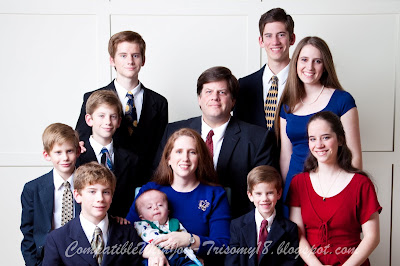 We’re going to try something we haven’t done for a while, and have a family Christmas letter and card, or at least e-letter and e-card.  2011 has been a good year for our family.  We have been blessed and grown in many ways. 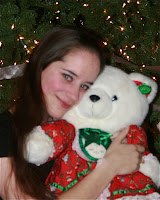 Deborah (20) has taken a break from school and gotten a CNA certificate.  She is currently working the graveyard shift at a local assisted living center and enjoying the sleep schedule she’s been trying to cultivate all her life:  up all night, sleep all day.  In addition, she has been a huge help with Aaron as she has learned how to take care of all his many needs. 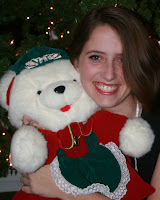 Mary (19) finished high school number six in her class.  She is enjoying her first year at BYU and doing very well.  She took voice lessons and is planning to attend a study abroad in England in about a year and a half.  We miss having her around here all the time, especially in the kitchen.  There’s still no one who makes the Sunday rolls like she did. 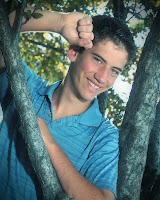 David (17) is a senior this year at Lone Peak High School.  He’s applying for college and still working on all those merit badges.  He’s also the Lodge Chief for the Order of the Arrow for Utah National Parks Council .  He is dancing on the ballroom team at high school and they took 2nd place at the National DanceSport competition in their division. 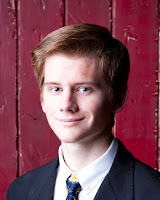 Jonathan (15) is a sophomore at Lone Peak High School and has added wrestling to our family’s sport repertoire.  He is also dancing on the ballroom team and doing very well in school.  He is looking forward to getting his driver’s license, if he could only get Mom and Dad to take him out to practice... 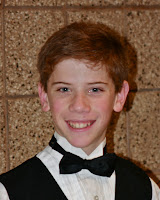 Matthew’s  (13) focus this year is on the performing arts.  He plays the trombone at Timberline Middle School and is involved in drama. Next semester, he is looking forward to Men’s Chorus and Musical Theater to his schedule.  He also sings in the ward choir, adding a strong tenor voice that the director loves. 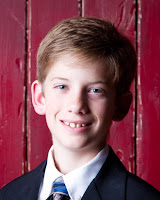 Joseph (11) is enjoying his last year at Westfield Elementary.  The only one still playing competitive soccer, he loves to get out on the field.  He sings with the Westfield Singers and was able to participate in several holiday concerts.  Earlier this year, he broke his arm and spent almost all the summer in a cast.  He’s really grateful that casts now are waterproof and he could still go swimming! 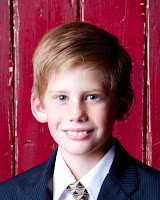 Andrew (8) is in third grade and was baptized this year.  He also sings with Westfield Singers and really enjoyed the experience.  He’s now a Wolf Cub Scout and loves to play with his friends.  He plays keeper and forward on his soccer team and is a real asset to them.  He’s also getting really good at his times tables. 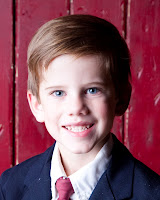 Michael (5) is in Kindergarten and loves to ride the bus. He’s learning to read quickly and loves going to school .  This year was Michael’s first year playing baseball (t-ball) and soccer and he really enjoyed the sports.  He is an awesome helper at home, and is probably one of very few kids who knew his upper numbers (90-100) before his lower ones.

Aaron (18 months) continues to inspire all of us.  He enjoys his life and gives such love.  While he spent much of his time last winter in the hospital, he’s only gone in sick twice since last April.  His nurses who come at night really hope he’s awake to play with them.  He is still growing and developing, just at a much slower pace than most children.  At 18 months, he’s about a four-month developmental age.  That’s okay.  We always said the kids grow up too fast.  We’ve had 1 ½ years of a newborn, and it’s truly a blessing to have him in our home.

Rebekah has continued attending “Aaron’s Medical School” and now feels confident enough to ask the hard questions and participate in rounds when Aaron is in-patient at the hospital.  She has also picked up a part-time job doing transcription to help make ends meet.

William is still serving as the chapter advisor for the Order of the Arrow.  He’s also been doing some freelance work as an attorney.  Mostly, he loves to hold and snuggle Aaron.  And it’s a two-way street.  When Aaron is struggling, Daddy holds him and he does much better right away.

Our family has been so blessed this past year, and pray that you know of our love for you.  We have felt the love and concern and prayers that have been offered on our behalf and are grateful for them.  May this Christmas time find you well and happy.
Love, The Petersons

Posted by CompatibleWithJoy at 3:13 PM