Okay, I think I might have caught my breath here, at least for a moment.  Aaron had his MRI last Thursday and then we visited with Dr. W. in neurosurgery on Tuesday.  He was as wonderful and compassionate as I've been told.  Aaron's hematoma has resolved, which is wonderful news.  He does have excess fluid in and around his brain, but not extreme amounts, and basically the same as his MRI in mid-October.  So we're in a watch-and-wait pattern right now.  His head will be measured each month by his pediatrician, and I'll watch for strange signs here at home, and we'll repeat the MRI in three months.

On the way out, we had some enjoyable experiences.  We ran into Dr. C, our geneticist.  He is AWESOME.  He's a key speaker at SOFT conferences world wide.  He mentioned that he'd been told Aaron was in the hospital last month but he'd been out of town.  I said, yeah, Aaron's kinda well known around the hospital.  No, that's not how he heard.  He had been in AUSTRALIA at a SOFT conference and someone there told him we were at PCMC.  Small world.  And wonderful friends who help look out for us even across the world.

Then we also saw Dr. M, his cardiologist in the hallway.  He was also really impressed by how well Aaron was looking.  And my cooperative little guy was happy and awake and smiling and playful.  Like he often is here at home.  At midnight.  But this time it was during the day at the hospital.  Loved being able to show him off.  And, just a side note, because I'm not sure who all reads this and where you are in your own journeys.  Many doctors, OBGYNs and Maternal Fetal Medicine docs will try very hard to discourage a mom with T18 or T13 from getting a fetal echocardiogram.  They reason that it's useless because the baby is going to die anyway.  This was Dr. M's comment, and he trained at the Mayo Clinic.  "It is absolutely necessary."  That way everyone knows what to expect and how best to provide support, whether it is pallative or proactive support.  We met Dr. M at my fetal echo and he has repeatedly shown compassion and the ability to look at the individual instead of the diagnosis.  We are so grateful for him and all of Aaron's other doctors. 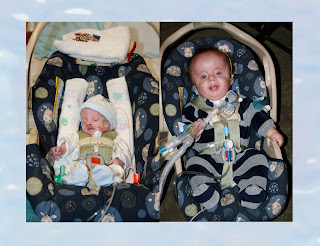 One last thing, we keep talking about how Aaron is growing.  He is growing so well that he's about to out-grow his car seat.  We're in the process of getting a special needs adaptive car seat.  This one will fit him up to 105 pounds.  If he's going to get that big, I probably need to start lifting weights!  Anyway, this is the baby that we had to use rolled up blankets and towels to keep sitting straight in his car seat when we brought him home.  Here is the "then and now" pictures of him.  Same car seat, same baby, much bigger.
Posted by CompatibleWithJoy at 11:42 AM