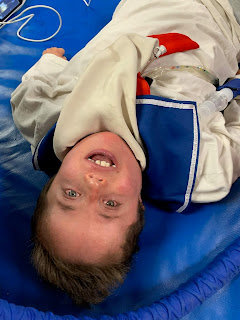 Aaron has been home, recovered (pretty much), had Halloween, a couple doctor appointments and gotten sick again.

I said it’d been too long, right?

Anyway, he did manage to weather this one at home.  He did continue to run a fever for about a week after we got home, but it finally went away.  He got another ear infection (maybe twice?) and a cold and is now doing “okay” with the resulting increase in his lung pressures. 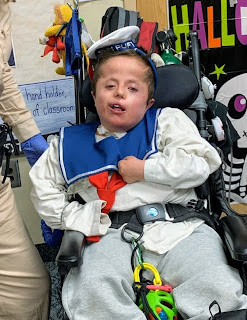 He thinks he’s doing more than fine.  Something the last couple days has been hilarious.  I would agree, except he’s laughing so hard that he’s hyperventilating and throwing himself into an asthma attack.  This kid...  I tell ya.

We did visit with another pulmonologist for a second opinion on his lungs and his vent settings.  The good news is that she believes we’re doing everything that we can do, and his settings are the best ones for him. That’s also the bad news.  There’s not a lot more that we can do to optimize his health.  It’s bittersweet.

We’re still riding the Covid isolation rollercoaster that so many are on.  I find it more than a little frustrating to deal with those who think it’s no big deal because they’re all healthy and fine.  And it’s hard to have teenagers who should be going out, hanging with friends, doing activities, and can’t.  But I’ve seen the reality of an overcrowded ICU.  I’ve lived it.  I’ve been in a room built for one with two beds and two sets of monitors.  And I’ve watched as staff have rushed from one patient to the next, never really having the time to slow down.  During a (virtual) meeting at Primary’s two weeks ago, we learned that there are about 14 kids hospitalized, half of which had no pre-existing conditions.  And this is a virus that “doesn’t affect” kids. 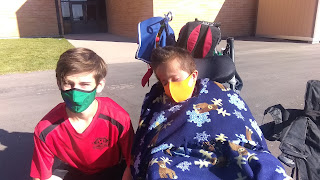 In other news, William finally was able to have knee surgery ten days ago, and my dread of the dentist has caught up with me (again).  I had a root canal on Tuesday because, why not?  But we just keep moving on.  I’m getting used to working a swing shift and then trying to sleep for a few hours when the kids go to school.  Andrew is back on a hybrid schedule because there are too many cases at the high school but will return to a "full schedule" tomorrow.  Michael still goes to school on (this year’s) typical schedule of M, T, Th, Fr.

And I’m trying to get through some pre-requisites for a master’s program.

I’m grateful for this time to be thankful.  A week ago, we watched the prophet speak and as he did so, I felt it touch my soul.  One of his challenges was to flood social media with grateful posts.  I don’t think that means we have to ignore the hard times or paint everything all rosy. But I know that as I read and looked at pictures, my spirits lifted.  I was reminded that during one of the very dark times in Aaron’s life, I wrote a post entitled “Happiness Is...”  That was another hard season.  Aaron’s heart was failing and we didn’t know if we had enough time left for his new medication to actually take full effect.  My father-in-law was in the hospital, and ultimately would pass away a few weeks later. 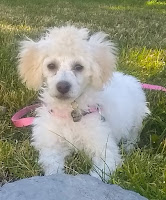 But it was those little things, the lemon bars at lunch, a favorite cookie dropped off by a friend, the funny bear that hung in the partially constructed building across the way, the bed the nurses made up for me as we got to the room in the wee hours of the morning.  It was those things that helped me through.  And if I’d only focused on the hard times, I would have struggled so much more.

So today, I’m focusing on a couple silly puppies, a granddaughter that lives only down the stairs from me, a son who is willing to drop in to take care of a plumbing problem that truly, I should have been able to do but was beyond my emotional energy.  I’m grateful for sunshine and a job that I can work safely from home.  (I mean, you can’t beat a 20 ft commute.)  I have co-workers that although we don’t see each other in person (never have!) reach out and make me smile.  I love my comfy bed and the fact that my puppy lets me sleep even during the day and waits patiently (most of the time) to get her out.

I’m grateful for the technology that allows us to still have worship services with others even when we’re not “with” them, and for sons who hold the priesthood and can administer the sacrament so I can renew my covenants with my Father. 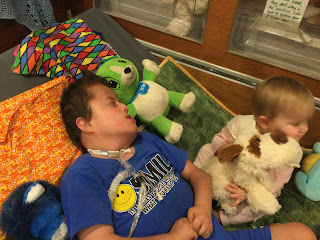 And so many, many others things, family who prays for us and we pray for as well, friends across the country, the freedoms we enjoy here in this land.  Is it perfect?  Nope, but neither am I and I think it’s about the best there currently is.

So there’s some of my ramblings.  Aaron is doing well overall, and we’re hanging in there.  And I’m grateful.

Counting our blessings is far better than recounting our problems.
President Russell M. Nelson
Posted by CompatibleWithJoy at 8:55 PM