We're back in school, back to work, back to the doctors...

Well, yeah, but they're routine (I guess) visits.  Follow-ups, you know.

Aaron saw cardiology just before the New Year and trach/vent clinic on Wednesday.  That one is a loooooong day.  Actually, both were.  The short version for those who don't have the patience or time to sit through long-winded explanations is that he's doing pretty good, actually, really good for him.  On all fronts.

Because of his pneumonia, he's back on the vent 24/7, and it's been interesting to say the least.  It's kinda a challenge, adding that weight back onto the wheelchair, making sure we've got enough battery power, checking the oxygen, 'cause he uses more when on the vent.  You know, logistic type things.  BUT he's happier, more awake, more interactive, more mischievous (not sure that one's so good). 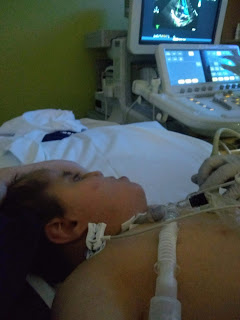 His echo (ultrasound of his heart) looked pretty good, about the same as it has the last few years.  His ejection fraction ( the "squeeze" of the heart) is still very adequate.  An echo isn't invasive.  They don't poke you or hurt you.  But this one took a while, almost an hour.  Almost an hour of helping him hold still (kinda) and keeping him from "helping."  That was hard.  I kept wanting to ask if she was almost done, but at the same time, I knew we needed as much good information as she could get so I didn't want to rush her.  But when you're holding down a wiggly kid and it's quiet and you're watching a screen (that you still don't know how to read in spite of watching soooooo many of these), well, it's exhausting, mentally and physically.  But in the end, Dr. D. was happy with the images.  He ordered a bunch of labs to check function, blood levels, etc, and they all came back looking beautiful.  So the long and short is that he's in a pretty good place.  And maybe in part because he's back on the vent.

See, pulmonary hypertension, high blood pressure to the lungs, it's complicated (of course, what isn't??).  Ventilators keep lung pressures artificially high, so if it's not needed, getting off is best.  But if the lungs aren't staying open, if they're collapsing down at all (atelectasis) it's harder for the blood to move through the tissues, further increasing the pressures.  So are they or aren't they?  That's the million dollar question.

With trach/vent we see pulmonology, special needs, and ENT.  There we talked about lung function, how it's doing, his ears, his scoliosis, nutrition, supplies, equipment, and nursing; all that.  Fun times, let me tell ya.

And how's his scoliosis progressing?  Well, we already checked that with Shriners so it was just a transfer of information.

The ears?  Well, tiny canals, too small for tubes, and has his cholesteatoma come back?  Only true way to tell is surgery, and the next best is a CT scan.


Weight?  He seems to have put on a bunch of weight in just a month, just over five pounds!  His calorie intake really hasn't changed, so is he retaining fluid?  I know he's "backed up."

His lungs?  Again, is the vent helping or hurting?  Again, we probably need a CT to know more.

And then there's the semi-annual ultrasounds that he's supposed to have for liver and kidney cancer screenings.  Yeah....  I've kinda put them off.  It's been 18 months...

So that's the gist of what was covered in clinic.  The long and short is we're re-looking at his food and fluid intake, trying to make sure he's "going" enough and not holding onto either fluid or stool.  He sees neurology next week so we'll get another weight on him then.

We've got orders for ultrasounds along with one more blood test to check his vitamin D levels, trying to cover all the bases here.

The lungs and ears?  Well, right now we're in a holding pattern.  Come spring or early summer and no illness, he'll go in for a CT scan of both.  Because he doesn't have the ability to hold still and cooperate, he'll have to be sedated, and he and sedation don't get along real well anymore.  He'll stay on the vent until they can check exactly how his lungs are working and there's simply no way anyone wants to take him in without him being in tip top shape for several weeks.  I wouldn't allow it anyway. 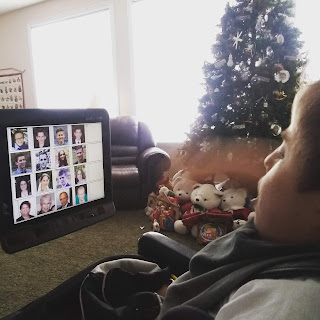 Right now, he's not in "tip top" shape.  He's been sick again.  He came down with a cold on Friday but the good news is, he's handling this one pretty well.  He peaked Tuesday night into Wednesday morning and aside from being a bit more tired and a lot more albuterol (okay, and oxygen and slightly higher vent settings), he's carrying on like nothings's going on!

So that's where we are medically.  And congratulations if you made it this far.

We're working on his computer.  I'm trying to learn how to optimize it.  That will have to be the subject of a different post.  This one's too long already.  But suffice it to say, he's really, really good at throwing pies at faces.


"Medicine is a science of uncertainty and an art of probability."
William Osler
Posted by CompatibleWithJoy at 8:14 PM