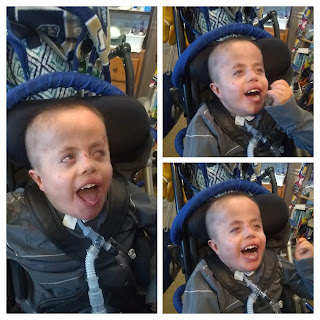 Our little goose is having quite a lot of fun lately.  Seriously, he is.  And he might be driving me just a bit crazy at the same time.  That's okay.  It's all good.  Really.

His neurology appointment went pretty well.  Assuming we get to the point where he can undergo anesthesia for his CT scans, we'll also tack on a brain MRI, mostly to get a baseline read of what's going on in there.  He had a few, several years ago, but that was before he was a year old.  Everyone's brains change a lot during those first few years, so since he's going under anyway, we might as well do this, too.  Anything else we can add on?  Maybe dentistry.  It's been a while there as well. 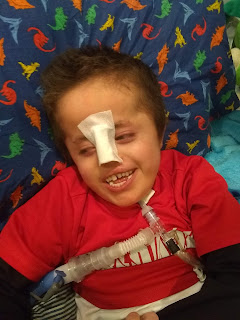 Anyway, back to our monkey.  He scratched his nose a little bit and it bled.  Of course, platelets being low and all, it didn't just bleed a bit. It bled everywhere. And apparently, as soon as it would start to heal, it itched, so he'd scratch it again.  Finally, in desperation, I fashioned a bandaged that made things look much worse than they really were.  In my defense, I couldn't figure out how to put a bandaid over the bridge of his nose without covering his eyes.  He actually left it alone for about 24 hours!  And went around looking like some kind of warrior from the middle ages.  And laughing the whole time. 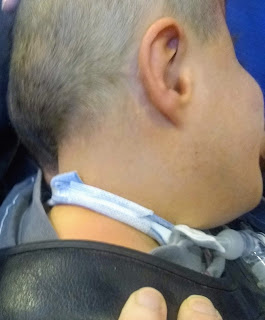 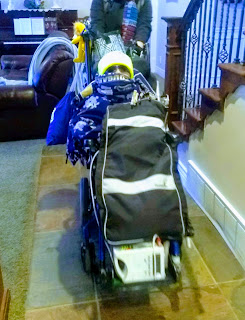 His latest trick involves purposely undoing his trach ties.  It's almost like he figures that it's no longer necessary.  Um, yeah, it is, kid.  We finally resorted to wrapping cloth tape around the velcro, because nothing else was working!  That velcro isn't wimpy.  It's hard to undo.  But when he's determined, it's hard to stop him.  Not a lot more heart-stopping for a mama than to walk into a room and see trach ties completely undone.  Without those, there's NOTHING holding that little breathing tube in place.

And it's January, so it's cold and snowy.  We try to keep the driveway clear, but that doesn't help the cold part.  Here he is all bundled up to get on the bus.

I'm so glad he's feeling better.  We managed to handle both his cold and the subsequent pulmonary hypertension bump at home.  More oxygen and slightly increased vent settings did the trick.  He pulled out that post-viral gastroparesis again, so he was on clear fluids for 24 hours and we're still doing reduced feedings.  Probably bumping them up again tomorrow.  We'll see how it goes. 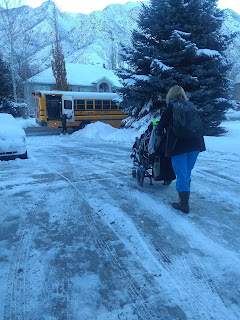 On another note, I was reminded again yesterday how strange and weird things have become.  A few years ago I noted that  "the hard part about crazy, weird, medical life becoming your norm is that you forget that it's really not normal."  Well, yesterday I ran across an article on a medical blogroll I subscribe to.  (I told you I was weird.)  It was called "A Deep Dive into Pulmonary Hypertension."  And yeah, they did dive deep.  And no, there really wasn't much new info for us.  And I understood it.  ALL!!  Without a medical dictionary.  And while that was empowering, it was also kinda sad in a way.  It felt a bit isolating, actually a lot isolating.

Aaron is 8 1/2 years old.  He should be running around, trying to keep up with his big brothers, pretty sure he's just as capable as they are.  I should be worrying about whether or not he's read his book for his book report due at the end of the month and whether he's actually cleaned up his room or just shoved things under the bed.  But he's not.  Instead, his big brothers and sisters have grown up fast, been exposed to things you try to keep from your child to preserve their own innocence, and those things have become their norm too.

It sets us apart, this medical realm we inhabit as we try to straddle two worlds:  the world where there's homework and sports practice and chores, and the world where alarms tell you that your child or brother isn't breathing well or you mix up medicines and give them through a tube, or try to suction garbage out of the lungs through a different tube.

But this is the life we were given, Aaron was given.  And don't get me wrong, we are so very grateful for it.  I was told yesterday that he is helping to change the face of Trisomy for the medical world.  I hope so.  His life, while not what I dreamed about nine years ago (we're almost to that day where we learned he would be "different) is still a good one.

"The quality, not the longevity, of one's life is what is important."
Martin Luther King, Jr.

Posted by CompatibleWithJoy at 10:54 AM