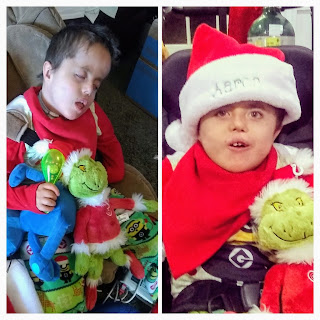 Okay, so I'm a couple days late.  Forgive me.

But it was a good Christmas, very good.  Ever since we moved here 14 years ago, our kids have had a slumber party in the basement on Christmas Eve.  You know, all in one spot, easier for the big guy to sneak in and deliver presents, easier for the early birds to roust the night owls.  But this year was going to be different.  We don't "have a basement" anymore since the newlyweds moved in.  But Deborah and Bronson decided they wanted to continue the tradition and invited their youngers to join them anyway.

The upshot of that is we could still hear the party in full swing when we finally made it to bed.  No worries, Santa still came through even though I think some didn't sleep until almost dawn.

Aaron had a very good night, and a wonderful day.  He was one of our sleepyheads, awake in the beginning but sleeping through a lot of the present opening.  Santa hit it out of the ballpark with him.  He opened a package of light-up maracas and has been making "music" ever since!  Between that and a little handheld "computer" that Gramma and Grampa gave him, he's been making sure we know when he's awake!

Speaking of computers, we've been working with his school and speech therapist for over a year to try to get him a communication device.  It's an eye gaze computer that will let him talk with us.  And it's coming today!!  Now Mama and Daddy need to figure out how to work it, too.  But this will be such an incredibly important tool for him.  He's been using one at school and apparently had a lot of success.

Except, he's my kid.  You know, the kid that it really doesn't matter where the teacher puts them?  They still find someone to talk to?  Well, the report is that when they need him to pay attention, they have to remove the computer because that's all he wants to do, use it to express himself.  I guess if I had to go eight-plus years without talking to someone, I wouldn't want to be silenced either!

All in all, a very good week.  He's home, he's doing well.  Sunday morning was rough, but since then he's done great.  Smiles are even back, most of the time.  (FYI: he becomes kinda sad when on steroids.)

He is back on the vent 24/7, and will be for quite some time if not from now on.  We'll have to see how his lungs do in a couple months.  Yeah, it will take that long for them to fully heal.  We see cardiology today, trach/vent clinic (ENT, pulmo, special needs, nutrition, respiratory) early January, and neurology mid-January.  Wonder what he'll have to say to all of them... 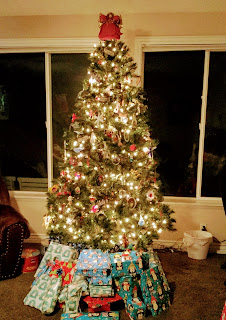 "Communication is something we all take for granted."
Miriam Margolyes
Posted by CompatibleWithJoy at 9:58 AM