This Life is Not Normal, Not Really 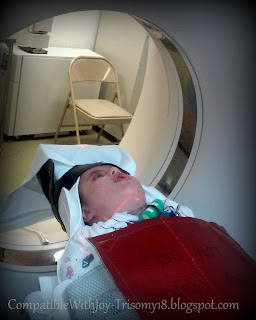 Aaron went in for the CT scan of his ear last Thursday.  Yeah, I know I said it was Friday.  Thank goodness the hospital called to do registration ahead of time.  We totally would have missed it.  Yep, I'm good that way.  We won't go into all the other goofy things I've messed up, forgot, or whatever.  Aaron might be looking for an upgrade in the mommy department soon.

Anyway, the CT itself went well.  I had my doubts.  Apparently, so did the tech.  I mean, he only needed to hold still for 3-5 seconds at a time, but sometimes even that's asking too much.  But the big silver ring around the tube seemed to capture his attention.  And while he was studying that, the tech went to work.

That was the easy part.  The hard part was reading the results when they went online on Saturday.

See, here's the hard part about crazy, weird, medical life becoming your norm.  You forget that it's really not normal.

He does need surgery, and not just on the right, but the left side, too.  Kinda suspected the right, not too surprised by the left.  Symptomatically (that's the stuff we see everyday) his right ear is the worst, so we're going to start with that one.  On the imaging, the left wins for sickest, so we're definitely doing that one too, just later.  They don't want to do both at the same time.  I don't know why.  Really, I don't.  But I'm going to trust the doc knows more about this than I do.  Right now the first one is scheduled for April 5th.  Happy Spring Break to us.

Anyway, it's called a tympanomastoidectomy.   Really big word for "open up the bone behind the ear and suck all the garbage out," more or less.

Funny, that wasn't what I  struggled with. 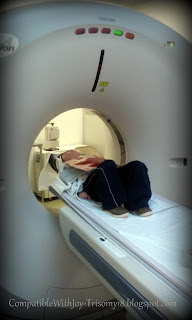 It's the part that we can't fix, that I didn't suspect, that's the hard part.  Aaron has failed every hearing test he's ever had.  That's why he's got a hearing aid.  But we thought it was because his ear canals were tiny, essentially collapsed.  And that plays into it, but we found out that's not all.

Remember learning about sound waves and hearing in school?  The three tiniest bones in the body?  We called them the hammer, the anvil, and the stirrups.  Kinda close.  It's really the malleus, the incus and the stapes.  They connect the ear drum with the oval window, which then leads to the semicircular canals and the cochela.

Or at least for most of us, that's the way it works.

Aaron's doesn't go quite that way.  Out of those three tiny bones, two on the right, and all three on the left are either malformed or underdeveloped.  The oval window is obscured on both sides.  His semicircular canals have minor impairments, and his cochela only goes around almost twice on one side and twice on the other.  Betcha didn't know that it's supposed to go around 2 1/2 times.  I didn't know before Saturday. 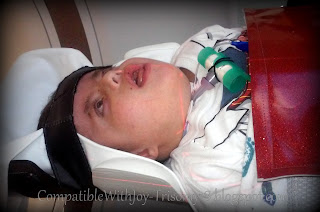 Out of 12 different entries per side (and that counts those three bones as one), Aaron has normal findings on two:  his round window and his internal auditory canal.  That's it.


And I guess that's what's thrown me for a loop.  He will NEVER hear well. It won't matter how much his ear canals grow.  It won't matter if we can get rid of the infection, although we really need to just for his health.  He won't hear "normally."

It won't affect life the way he knows it.  He's still happy, laughing, playing.  He smiles, loves back rubs, and fights going to sleep.  But for this mama's heart, it hurts.  It's a reminder that his body doesn't work "right."  He's fragile, he breaks easily.  Even the tiniest bones aren't "right."

Saturday and Sunday were really hard days.  Distance has provided some perspective, and I'm doing much better now.  He's been using his speaking valve and growling and laughing at his brothers.  He's gone to school.

"The flower that blooms in adversity is the most rare and beautiful of all."
- the Emperor in Mulan
Posted by CompatibleWithJoy at 8:01 PM