So Much of Life Happening...

Okay, so it's been a while.  Too long, in fact.  But life around here not only continues to go on, it's kinda crazy.  I guess that's nothing new, right?

The kids are all back in school and we're trying to find our pace.

Aaron actually made it to his first real day of school this year!  First one.

His first year, he had a PICC line and a blood infection.  Yep, not going there.

His second year, last year, he was trying to get over a cold.  That was one of the few times we didn't end up in the hospital with a cold, but he still wasn't leaving the house.


Anyway, so how things roll around here, well, we just keep going.

Aaron had an audiology appointment this week.  He's got a hearing aid that he wears on his head, but when his hair gets long, it causes feedback.  So in preparation for that, he got a haircut. 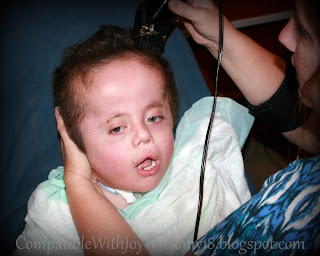 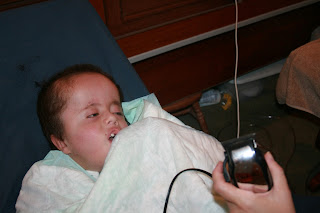 I guess it's the weird lot of a medically fragile mama that every time I cut it, there's a niggling thought in the back of my mind wondering how many more times I'm going to get to do this.  So far, we've been able to do it many times.  How lucky we are.

But this time was a little different.  See, usually when I turn the clippers on, I show them to him, and place them on his hand, his cheek, etc, so he can feel the vibration and not be scared by them.  But this little mostly deaf boy heard them click on this time.  And he was scared.  I tried to show him it was okay, but he just wasn't buying it.  It was the first time we've had tears for a haircut, and it about broke my heart. 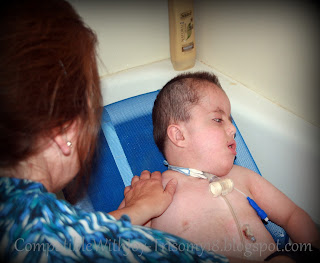 Next up was the bath.  That one almost always has tears, and since he was already feeling on edge, I figured it might be a bad one.  But he was okay.  Still not smiling and playing, but hey, over the sobs we usually get, I'll take it!

For those who wonder how we do it, he's got this mesh bath chair a friend gave us when her daughter outgrew it and he sits in there.  He can't lay down in the tub, or even get water into the trach site.  You know, perfect path right to the lungs and all. 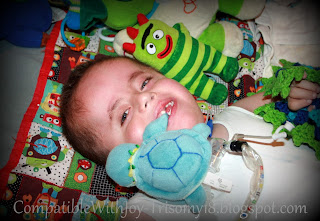 But he recovered from the ordeal pretty well.  Usually after a bath, he's all tuckered out and wants nothing but sleep.  Not this time. 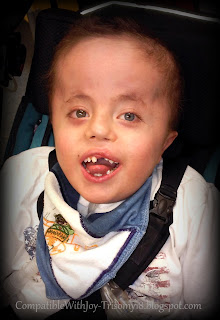 Audiology went well.  He still doesn't seem to hear well without his hearing aid, but we definitely get some results with it.  But this mellow kid doesn't make it easy.  He hears a tone, and reacts.  But when you repeat, even at higher volumes, it's like, "I already heard that, no need to respond."

Maybe kinda like selective hearing that sometimes others employ?? 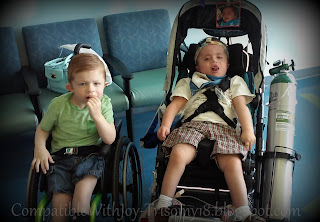 Afterwards, we got to visit for a little bit with one of his sweet friends who was on his way to his first day of school.  Isn't he a cutie?


A couple snapshots into what our days can be like around here: 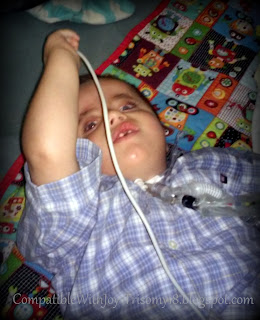 Aaron uses a pulse/ox 24/7.  It's a big part of keeping him safe.  But like anything, there are false alarms, and silly alarms.  To disconnect it, you press on two little spots on either side of the cord probe and pull it apart.  No biggie because he really doesn't reach his feet, so it stays on.  But every once in a while, it alarms "no sensor" and he's somehow disconnected it.  He thinks it's hilarious.

Then there are sirens.  Pre-Aaron, I would hear sirens and fleetingly wonder where they were going.  That's it, nothing else.  Yesterday morning there were several.  My heart went out to whoever they were trying to help.  But a small part of me grinned and said, "there are sirens, and I have no idea where they are going, and that's good!"  And that's pretty typical of my thought pattern when I hear them.  I can also usually pick out which vehicles they're coming from, police, fire truck or ambulance.  Yeah, I think I've become a bit too familiar with those sounds. 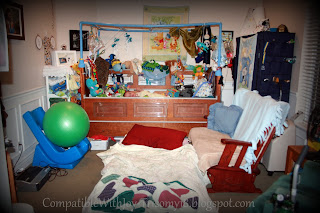 We've been nurse-less for three of our last seven night shifts.  One night, the nurse was sick, another nurse's car broke down and she couldn't make it, and last night, we just didn't have anyone.  So I was on duty.  A night nurse can't sleep on the job.  I mean, really, do you know many jobs that pay you to sleep?  But I have to, and I'm not getting paid.  So when we have no nurse, this is how we do it.  The boys put a mattress on the floor for me and I set alarms for his 2 a.m and 6 a.m. meds.  He also gets one at 5 a.m., but I combine those two when I'm doing it myself.

And then I try to sleep.  This crazy monkey of mine seems to think that when there's no nurse, it's party time.  Most nights, he's going to sleep around 10 p.m. or so.  Which would be wonderful!  But on the nights I'm taking care of things, it's usually close to 1:30 a.m.  And he rocks and rolls, grabs toys and throws them out.  Sets off alarms.  You get the picture.  So if I'm a little absentminded, you know what's going on.

Still, I wouldn't have it any other way (most of the time).  What a privilege  to be his mother.  What a gift our Father has given our family with this precious soul.  And I'm grateful that I still get those sometimes sleepless nights with him.


When everything doesn't go perfectly as hoped, it isn't tragedy — it's life.
~Terri Guillemets

Posted by CompatibleWithJoy at 9:26 AM