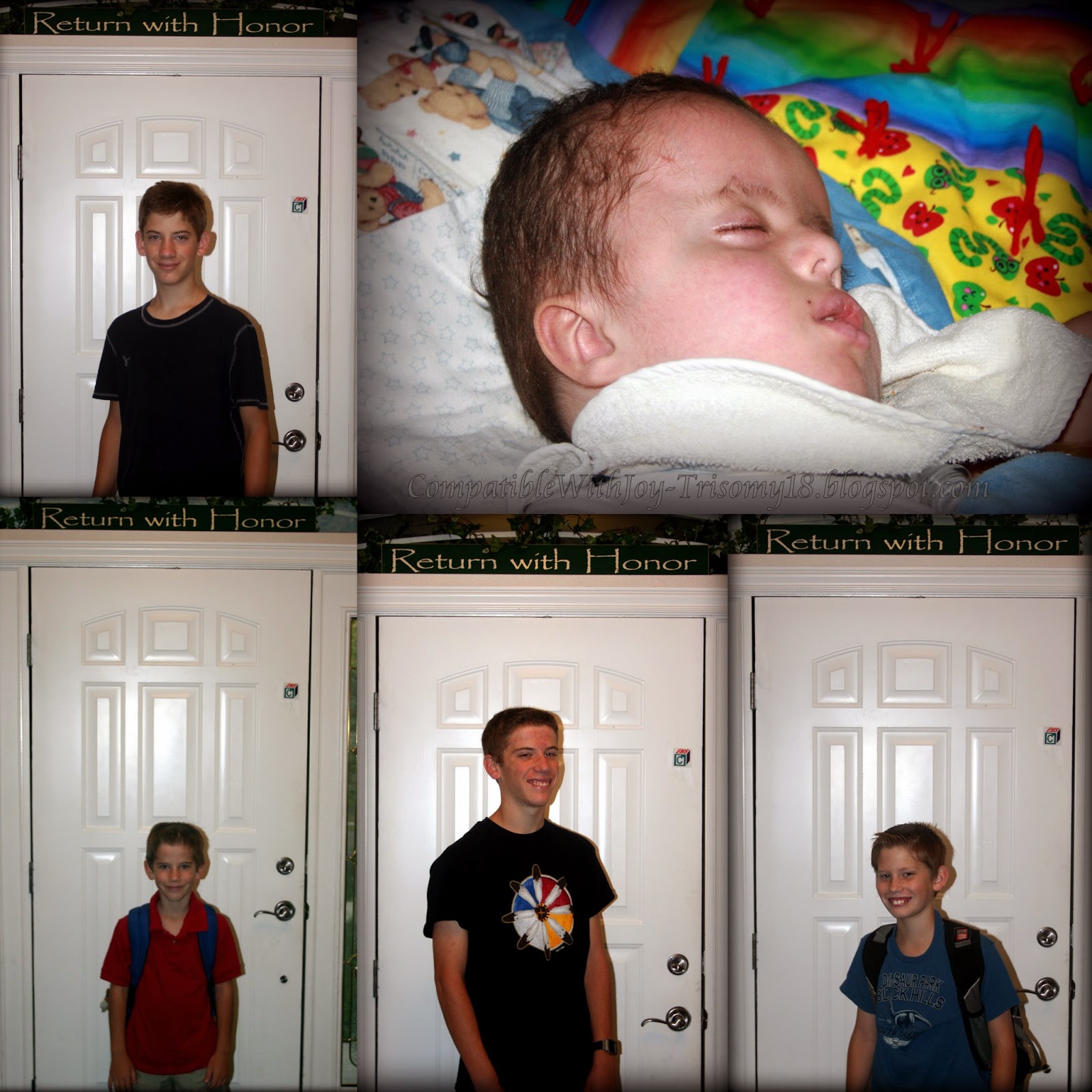 First of all, big shout out for the first day of school!  Everyone got up (almost on their own!) got ready and got out the door on time.  And Mama actually got real "first day of school" pictures of everyone.  Most years recently, someone's had their picture taken after school, or on the second or even third day.  We call those "first week of school" pictures.  Hey, it happens.

Notice how Aaron's taking all this in stride, or dream!  He doesn't actually start 'til next week, and he's enjoying a really nice lie-in today.  In fact, it's after 10:00 and he's still sleeping peacefully.  Kid better get it in while he can.  Next week the bus comes and he'll be back in school with the rest.  A week after that, and Deborah starts at BYU.  Kinda crazy.

Now yesterday, though...  Ever had one of those experiences that you hope NEVER happens again?  Yeah, this was one of those.  Matthew and I got home from getting his driver's license (yea! another driver to help out) and as we came in, William was calling me into Aaron's room.  He was breathing funny.  His numbers all looked good, and his color did, too, but he was pretty noisy.

I started looking at things, listening to his lungs.  Aaron has the ability to push air up past his trach and out through his nose and mouth (like us!) and that sometimes causes a kinda whistling noise.  But you check that out by listening to his lungs and then to his cheeks.  If it's louder in his mouth, blame it on the leak.  If it sounds louder in his lungs, look further.  This time it was his lungs.  He sounded asthmatic, but didn't look like it overall.  But we've got that ol' Albuterol (all-better-all) so I figured, why not?

Now, he doesn't always respond immediately, but he doesn't get worse.  This time he started to struggle, he also got upset, looked scared.  So even though I couldn't hear any "junk" in the lungs, I tried to suction him.  This involves inserting the suction tubing to the right depth, depressing a plunger to start the vacuuming, and pulling it back out with the nasties.

It really is pretty simple, and no biggie at all.  In fact, when he's sick, he might need it done as often as every 15 to 30 minutes.  It's kinda like blowing your nose.

Except yesterday, that's not what happened.  I went to suction him and the catheter only went partway in before it stopped.  I knew exactly what it was, although I tried to deny it for a second.  He had a plug.  And yeah, it's exactly what it sounds like.  A plug in your sink keeps the water in, blocks it up.  A plug in the trach doesn't let the air pass.  Not in, not out.  Pretty scary for him and for me.

I flew into gear, grabbed a trach tie, grabbed the spare trach, yelled to Andrew (who was in the room) to crank the oxygen all the way to the top.  I pulled the old one out, threw the new one in.  I'm afraid we didn't take the time to use all the nice lubricant on it and his stoma that makes insertion so easy most of the time.

And yeah, there it was.  A nasty, hard plug coating the inside of his trach, almost completely blocking it of.  Only about a pinhole opening in there. 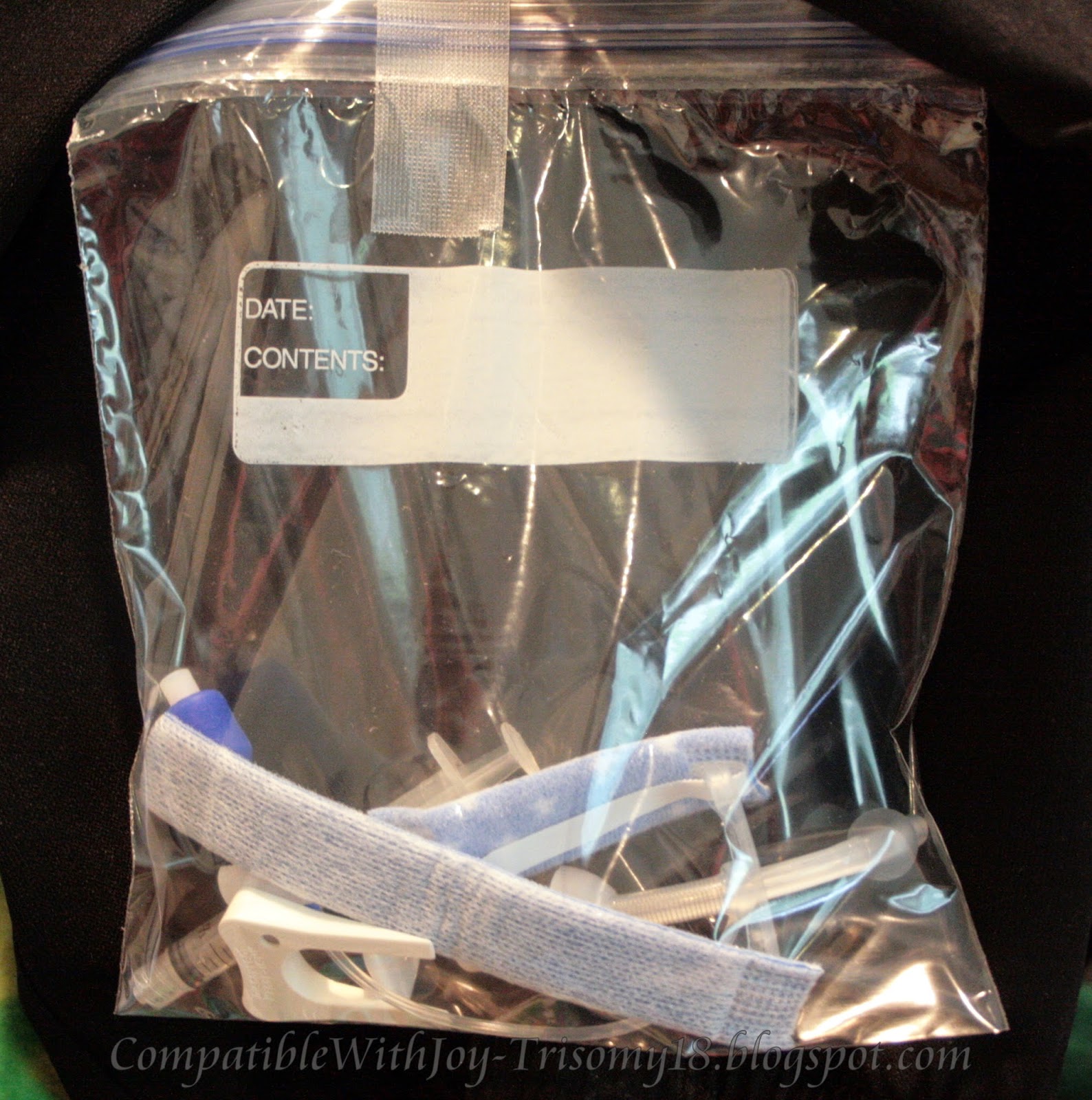 I put in a call to our trach ninja, and apparently, the fact that the new meds are working, they're opening up his lungs, is a double-edged sword.  As they open up more, he'll start moving more of the junk that we've never seen.  And it's got to go somewhere.  So plugging is more likely than not.  So now that trach that sits bedside, and the ties that are in the drawer in a package have been moved.   They're hanging taped to his mobile, and the ties are already on the trach.

He's doing great this morning, really, really great.  We're prepared if he gets another plug.  But oh, I can't tell you how much I hope this is behind us.  In the almost four years since he got his trach, he's never had one.  And they're scary, dangerous.  And a very, very real threat to anyone with a trach.  I know several moms who've lost their children to a plugged trach.

So yeah, while he's doing amazing today, we're still on high alert for any more plugs.  And like I said, I'd be more than okay if this never, NEVER happened again.

Last week, as I was coming home from visiting a friend, the "supermoon" was rising over the mountain.  I wish the picture could do it justice.  Can I say, I love living here in the shadow of these mountains.  It rose just perfectly between two peaks, and the reflection in the wispy clouds is beautiful.  So enjoy the picture.  I wish I could say I used some amazing technique to get it, but I'm not that good.  Aren't we fortunate that God is an amazingly beautiful artist? 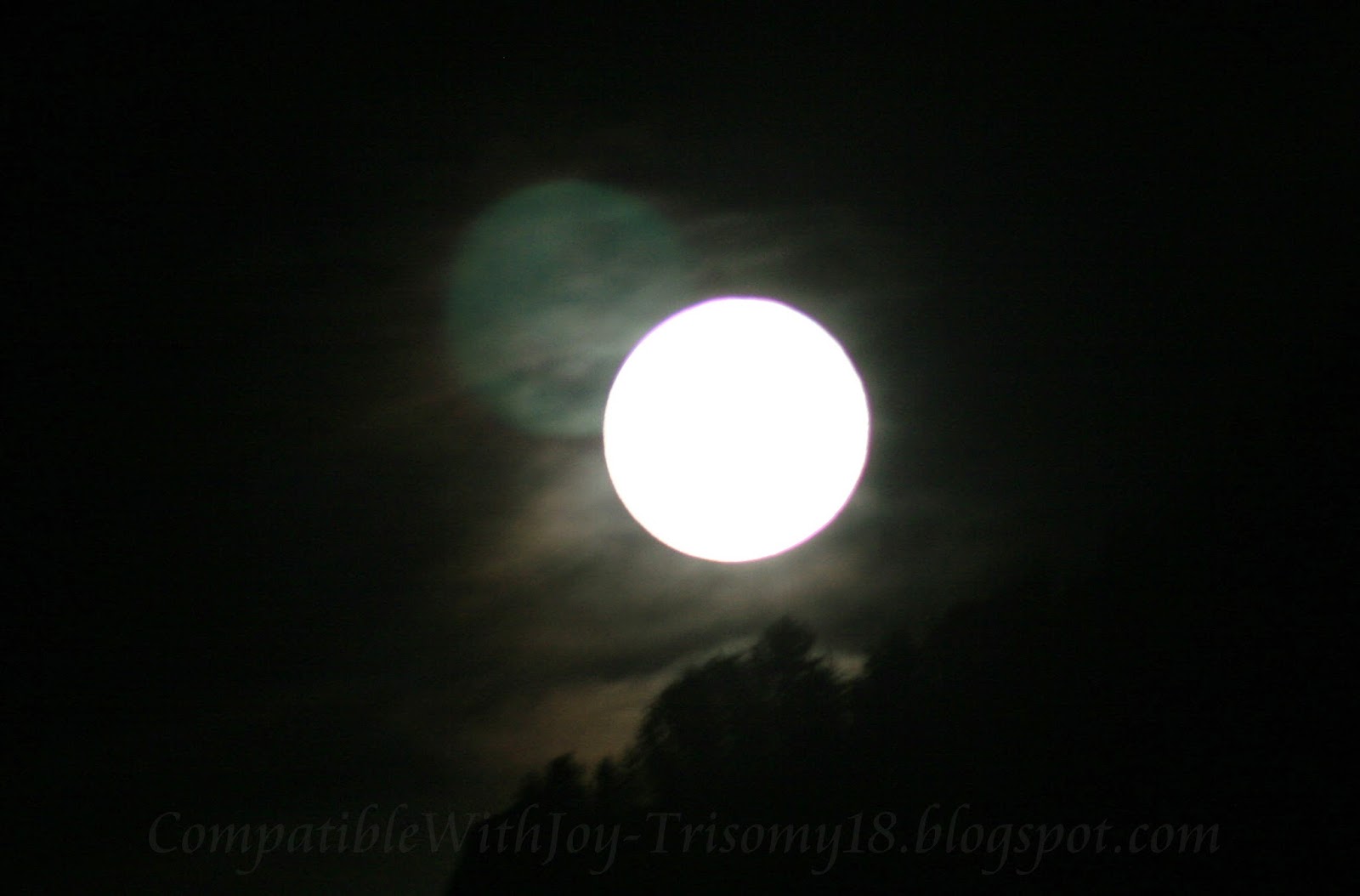 "The moon is at her full, and riding high,
Floods the calm fields with light.
The airs that hover in the summer sky
Are all asleep tonight."
-William C. Bryant

Posted by CompatibleWithJoy at 11:27 AM