The past couple of weeks have seen Aaron really on the go.  Or at least it seems like it.  And he's enjoyed being out and about, a lot!  This kid loves to get out and see things, new things, old things, whatever!  He just likes to go!

But it's harder than I'd like it to be.  See, he's attached to a big oxygen tank, his ventilator (I don't think holding his breath for an outing would work real well) and his pulse/ox machine that measures his heart rate and oxygen saturations.  Plus, we always have his suction machine close by along with his "go bag" for those "just in case" times, which do seem to come up fairly frequently.

And because we don't have a handicapped van, we have to load and unload all of that equipment, plus him, in and out of the car and onto his wheelchair at every stop.

So the long and short is, Aaron goes fun places, soccer games, ballroom concerts, and so on.  But not so much to the places a lot of toddlers find themselves, the store, doctor's appointments for other people, and so on.  We just don't run errands with him that much. 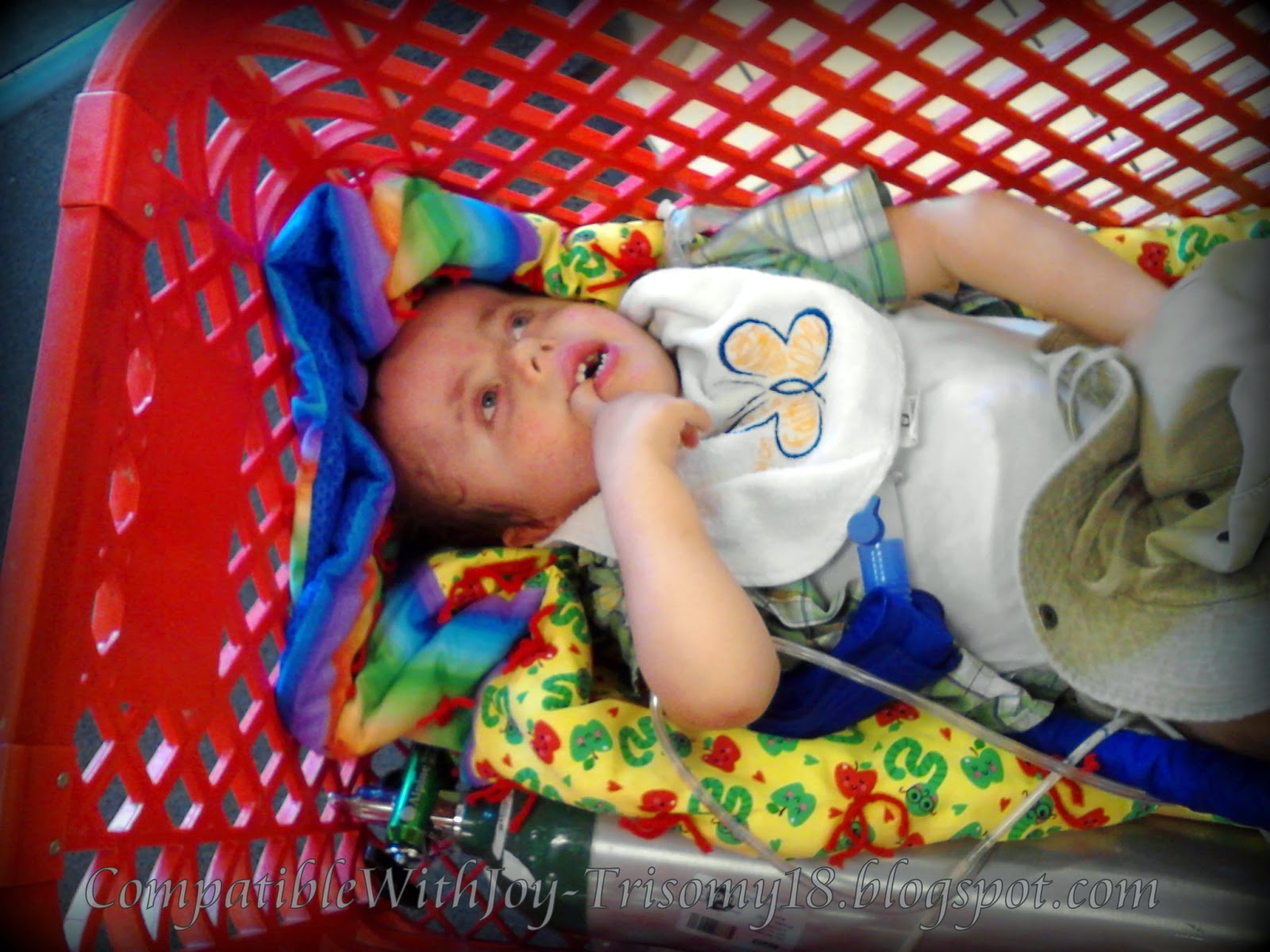 But a couple weeks ago, I was out with him and near Target, where I really needed to pick up some things.  I waffled, a LOT.  But finally decided to just bite the bullet and try things.  And it worked pretty good!  I put a blanket down in the basket (he still can't sit well on his own), put the oxygen tank next to him, the vent and pulse/ox in the front of the basket and hung the go bag on the handle.  He'd been doing well without suction, so I risked leaving that in the car, knowing I could make a mad dash, or describe it well enough to someone they could grab it if it became truly necessary.

Do you have any idea how freeing this was?  Now, I'm not for a minute thinking taking small kids shopping is the dream of a lifetime.  I get it.  I've DONE it, more times than I ever wanted.  But to not be able to, to not even have the choice, and then to finally figure it out, well, it's been a couple weeks and it still makes me smile. 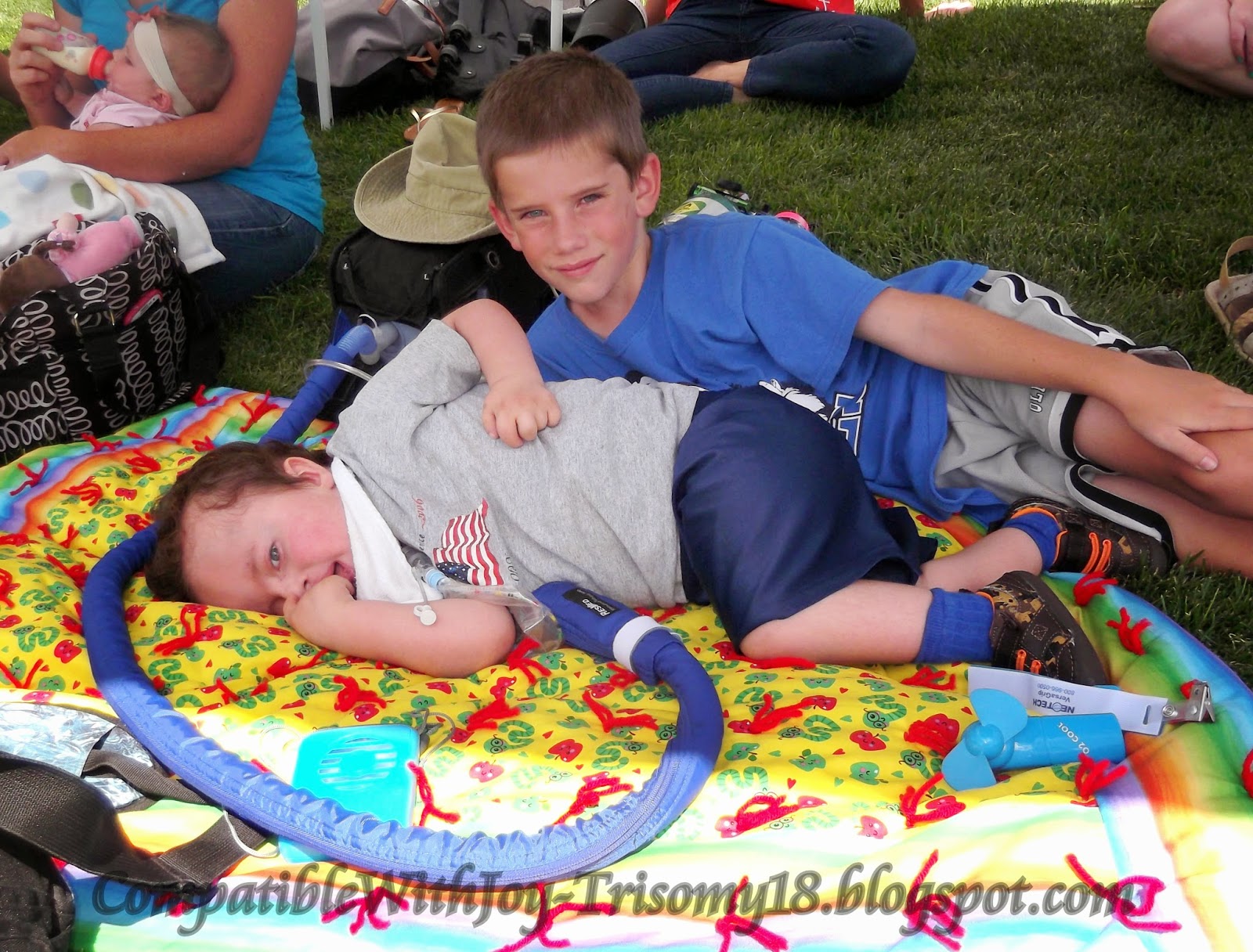 He's also been to soccer games ... 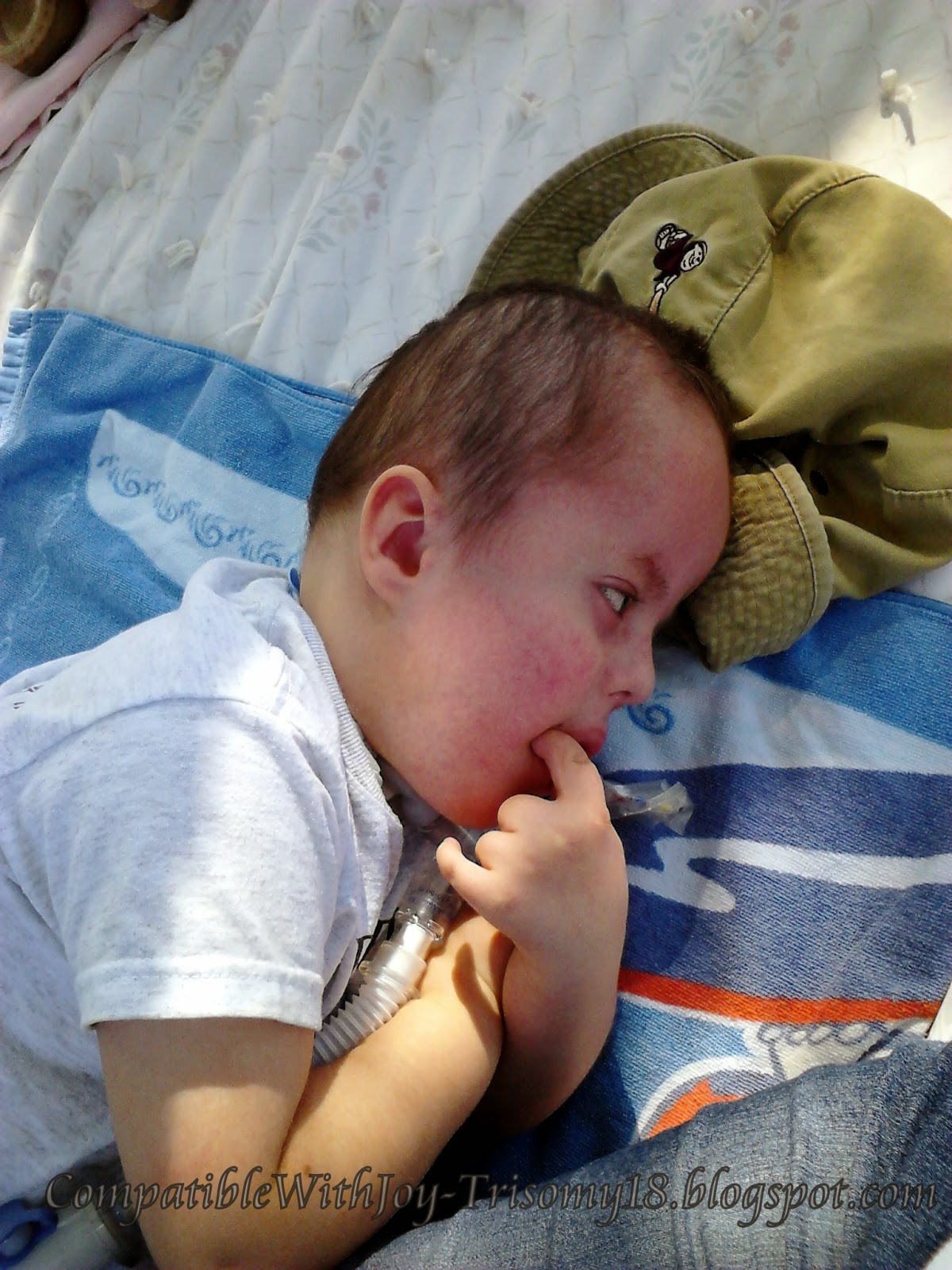 And to the water park at Seven Peaks.  He and I hung out on a blanket and he had a grand ol' time people watching. 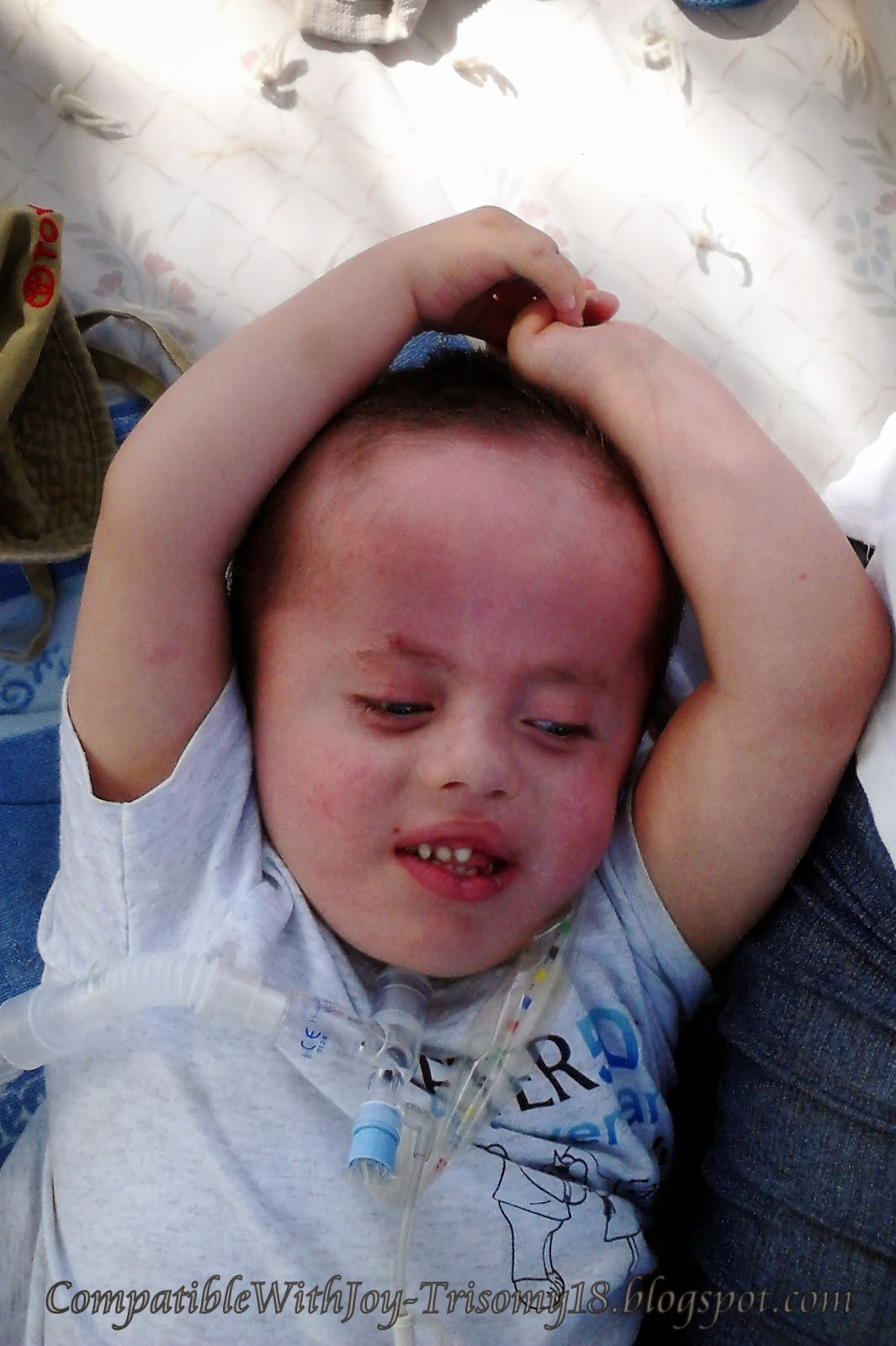 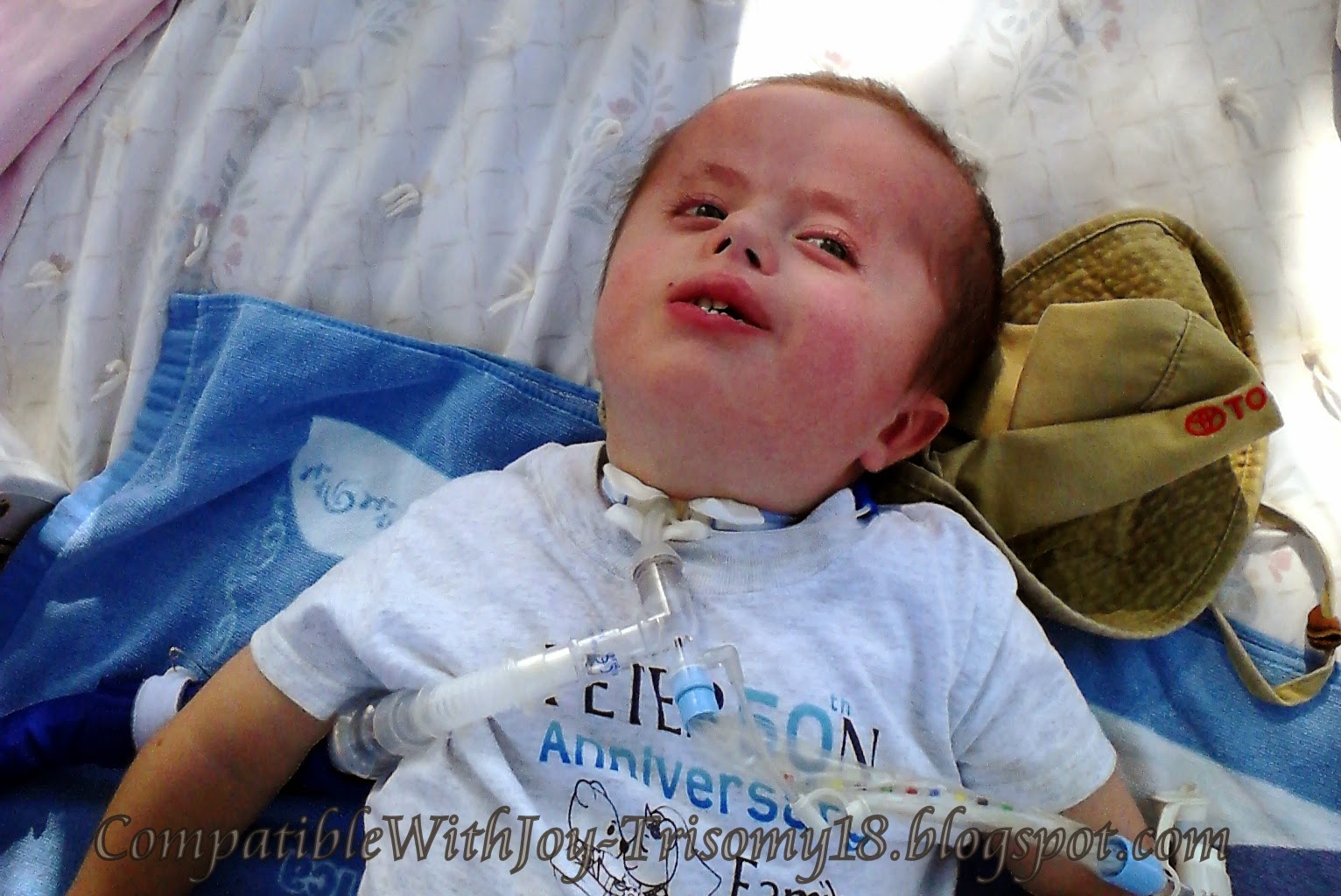 Then after a little while, he got tired and tried hiding from the sun. 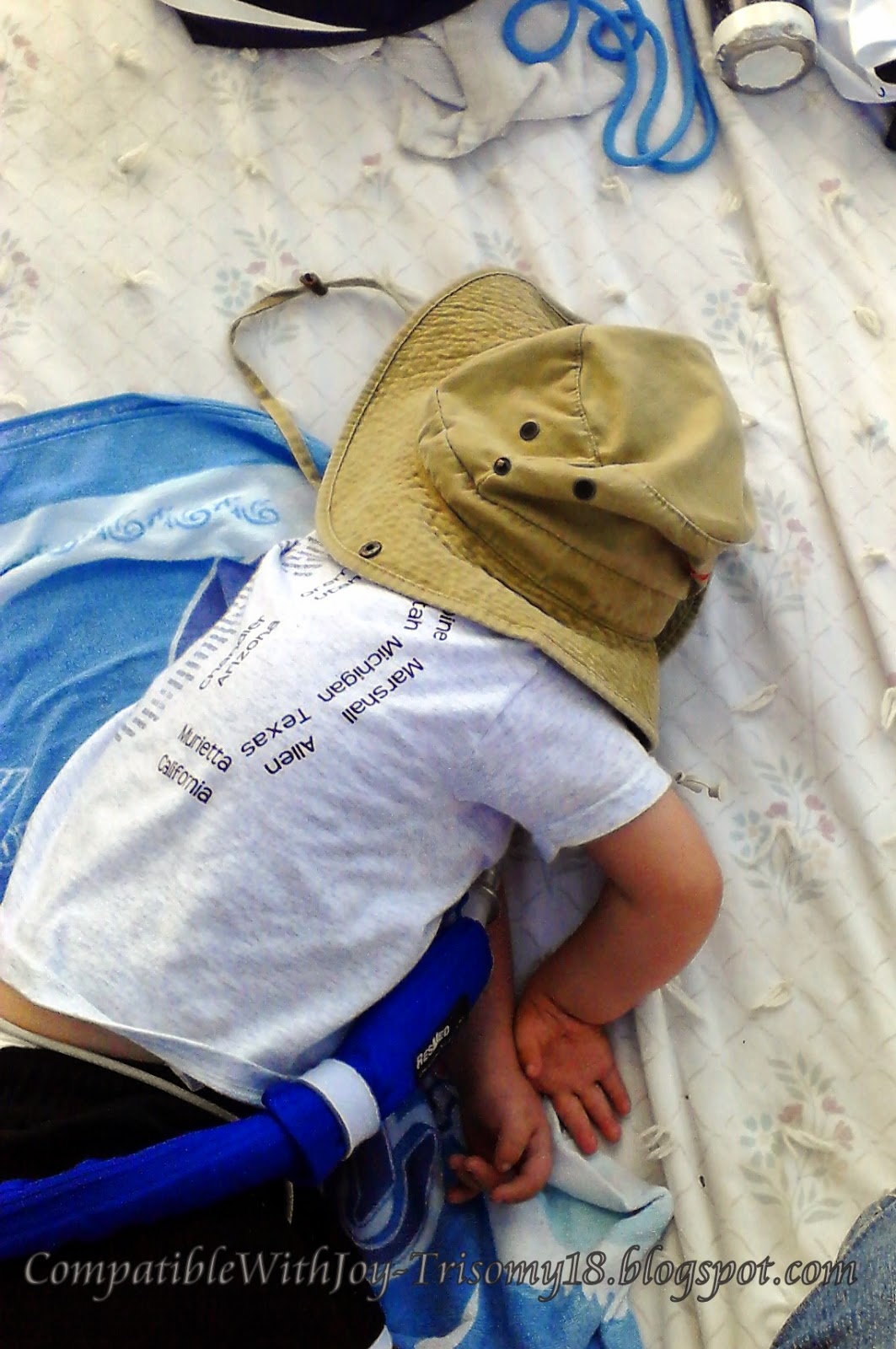 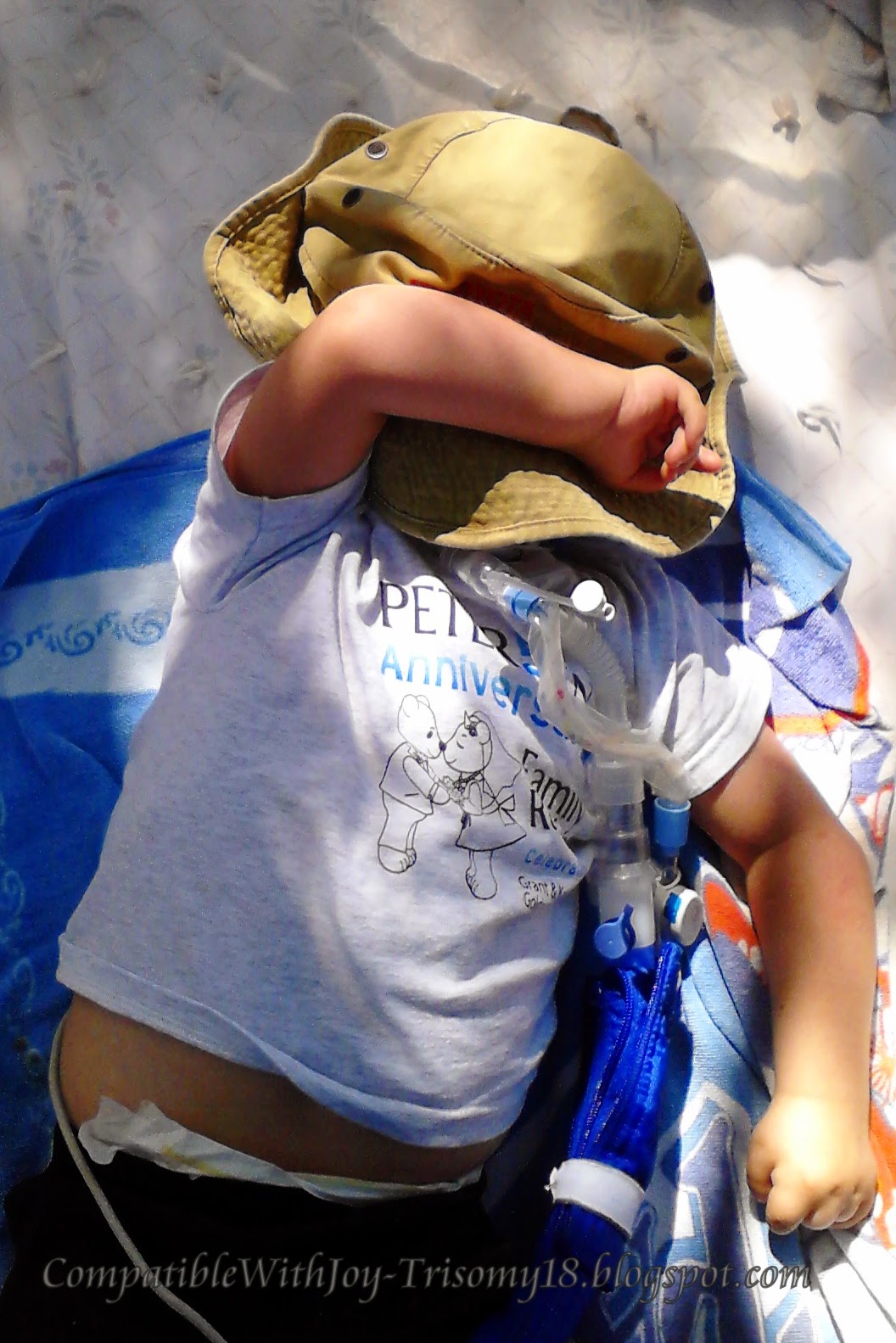 In fact, he ended up hiding so well, that he fell asleep.  Funny little boy. 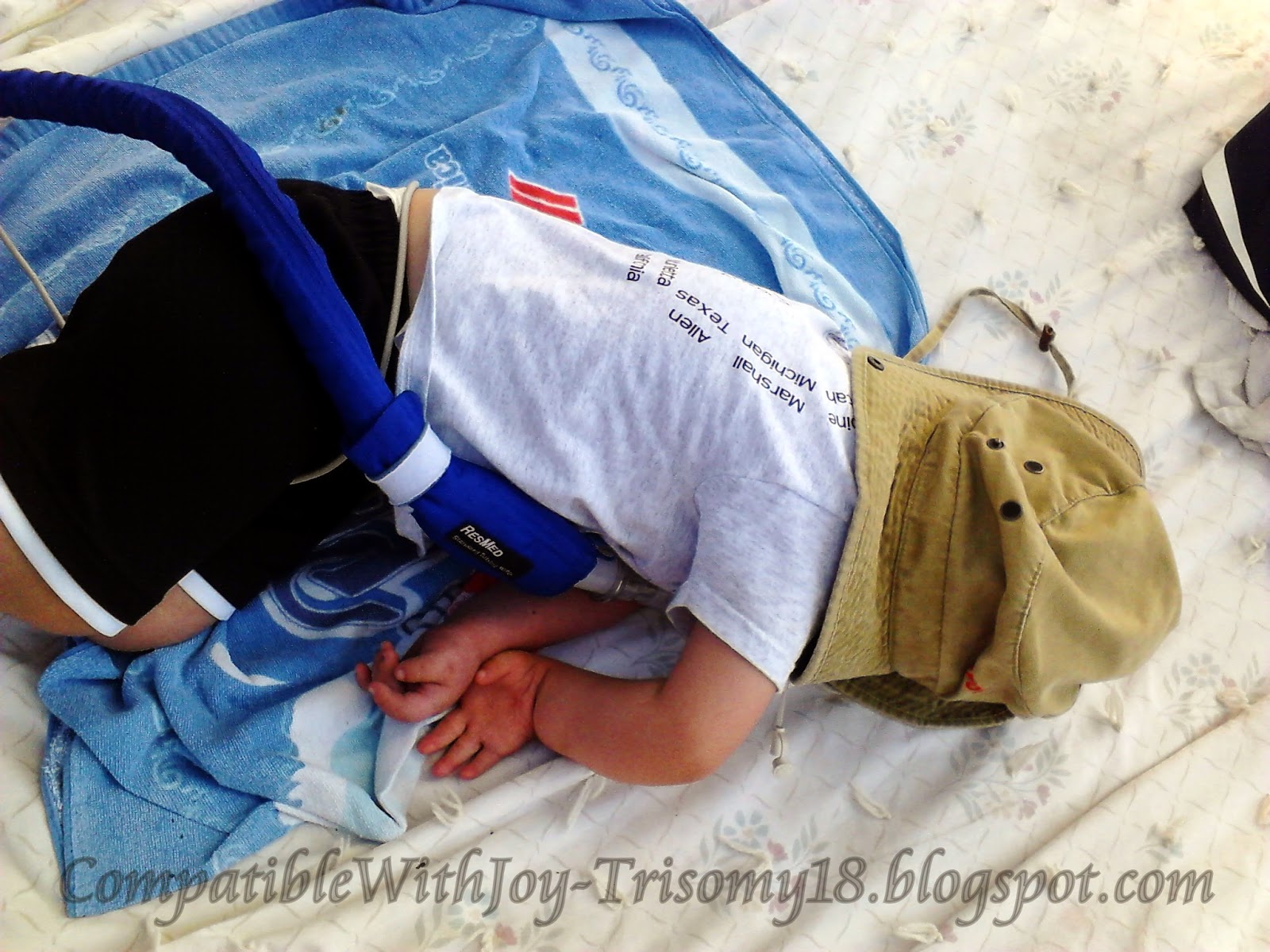 But the highlight of the past two weeks was Michael's baptism on Saturday.  What a blessing it was to have him there.  It's kinda funny that with six kids there, I felt like it was a small family group.  Missing the other three made a big difference, but I wouldn't have them anywhere else. 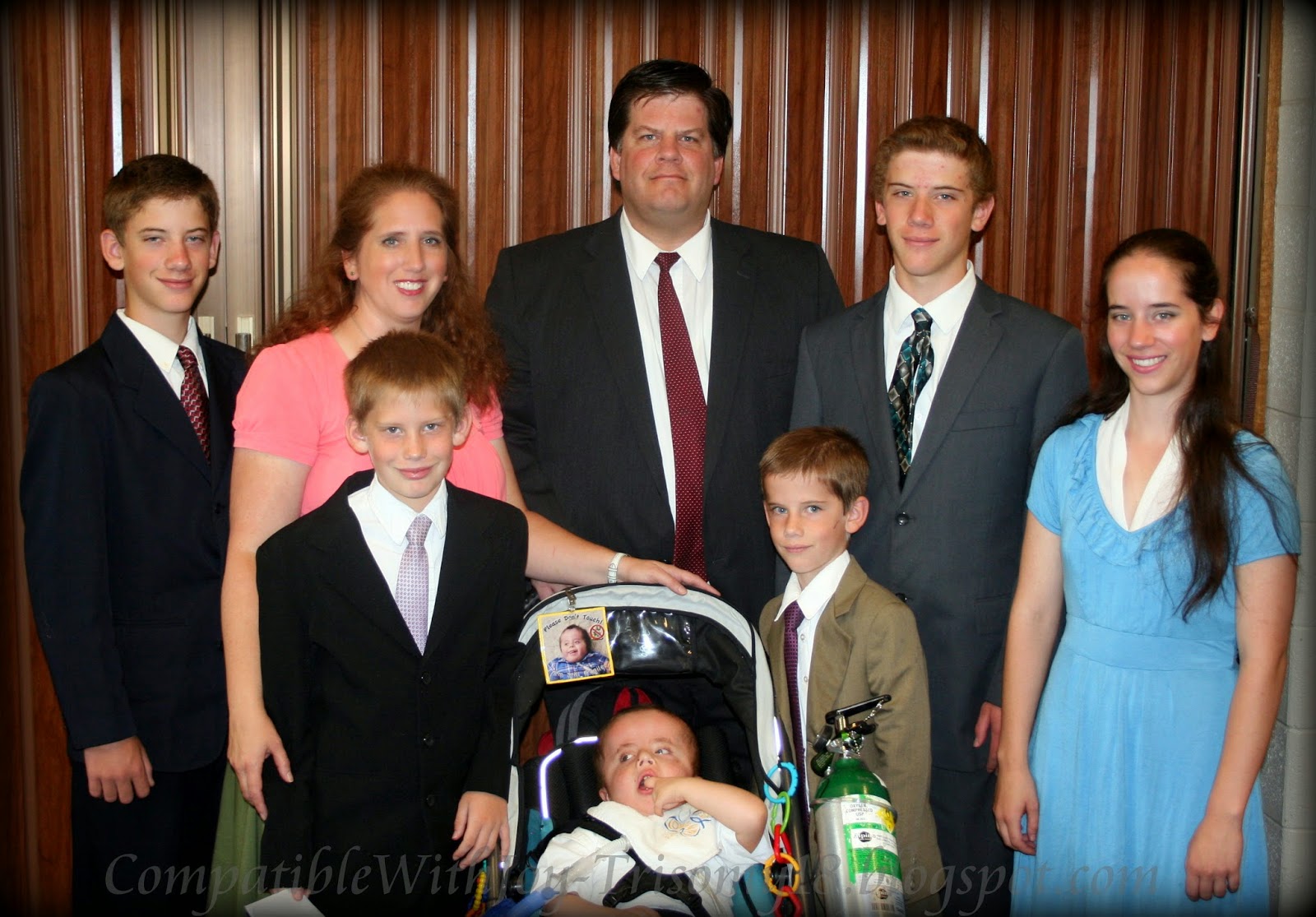 In fact, a funny story about Michael almost two years ago.  We'd been joking about how he fit in David's and Mary's suitcases, and could just stow away and go with them on their mission.  But at six years old, he didn't realize we were joking, and he was fully intending to go with David as his companion.  And he was devastated when he found he couldn't go.  The first reason I gave him fizzled fast.  I told him he couldn't go because he had to stay here so he could be baptized.  He looked at me like that was the dumbest reason I could come up with (maybe it was!).  And said slowly, like he was educating someone much less intelligent than he was, "Mom, they baptize people on missions."  Oops.

But it was a very sweet, special day.  And I think my favorite picture is the one I got of Michael and Aaron, when Michael is still dressed in white.  I love the bond between these two. 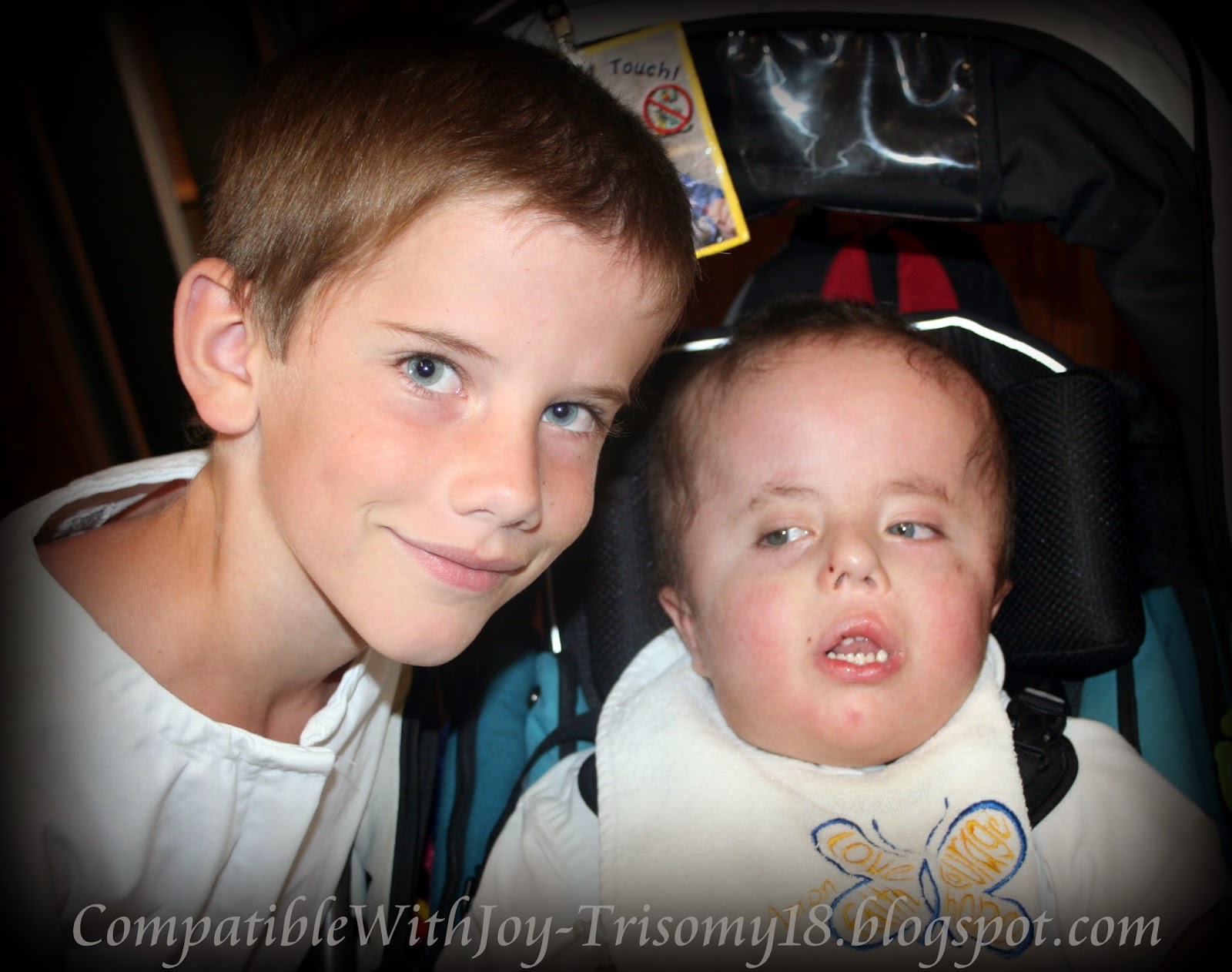 “We'll be Friends Forever, won't we, Pooh?' asked Piglet.Even longer,' Pooh answered.”
A. A. Milne
Posted by CompatibleWithJoy at 3:15 PM