So the 4th birthday party didn't turn out the way I thought it would, but that's okay.  This is NOT what I would have planned, but he had some fun new experiences, and got to see people he doesn't usually see on his birthday. 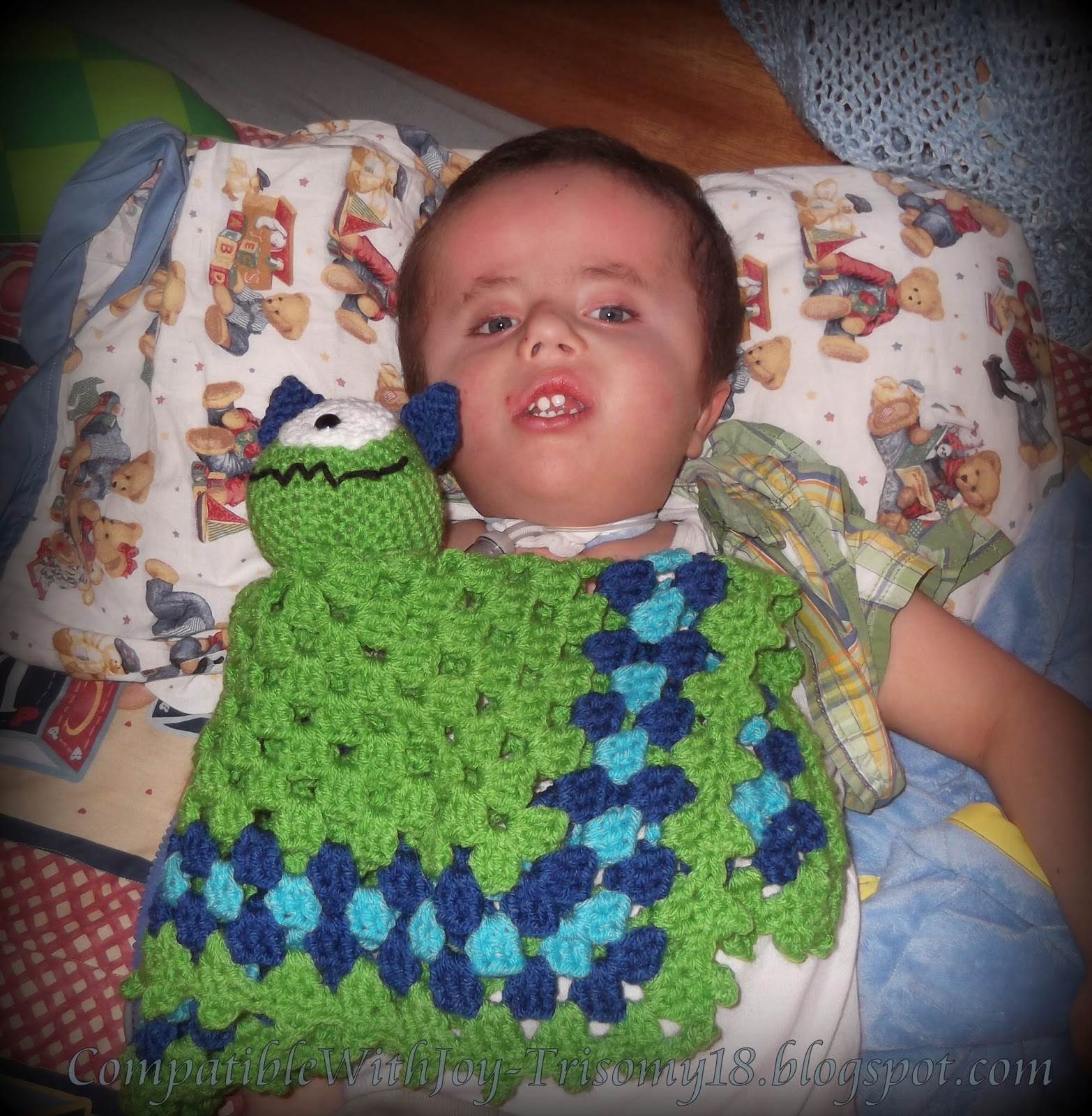 It started out when his nurse felt like he needed some birthday presents, so she brought in a couple of really cute things.  They even had some tags so I can send thank-yous to the ones who donated them. 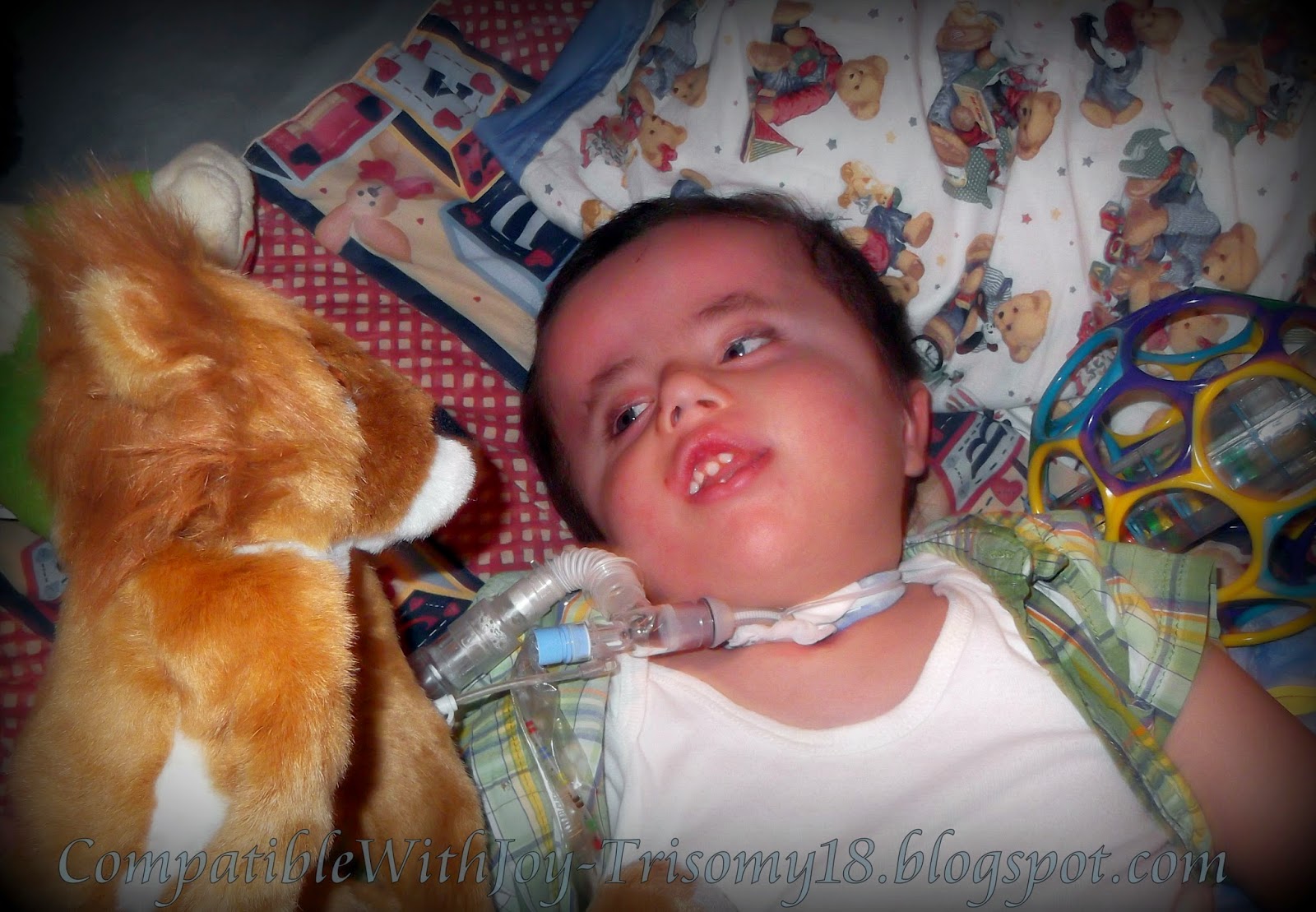 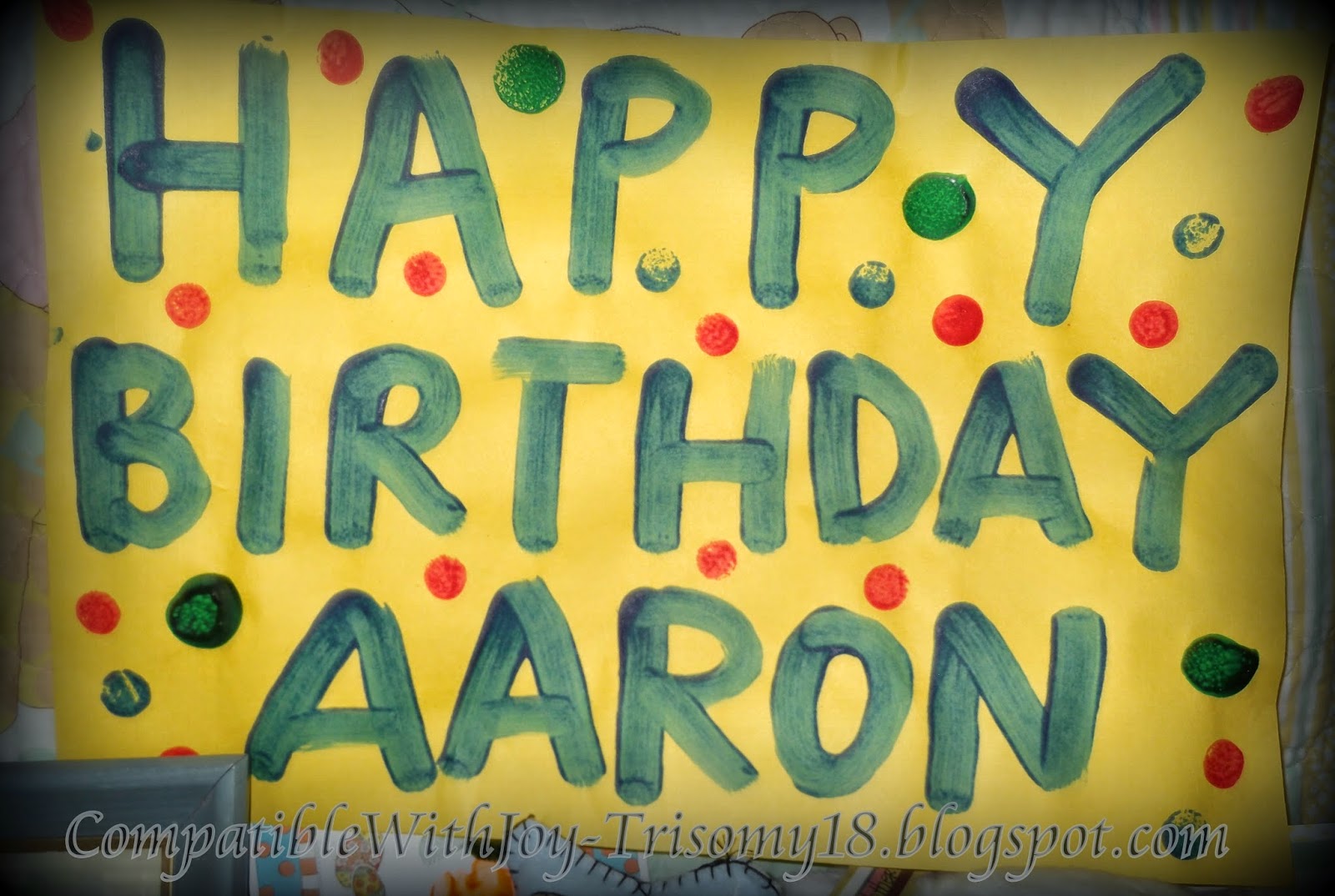 Then Child Life came in with a fun sign and a Toy Story balloon for him to play with.  This kid LOVES balloons.  So much fun to wave around and pull the strings on! 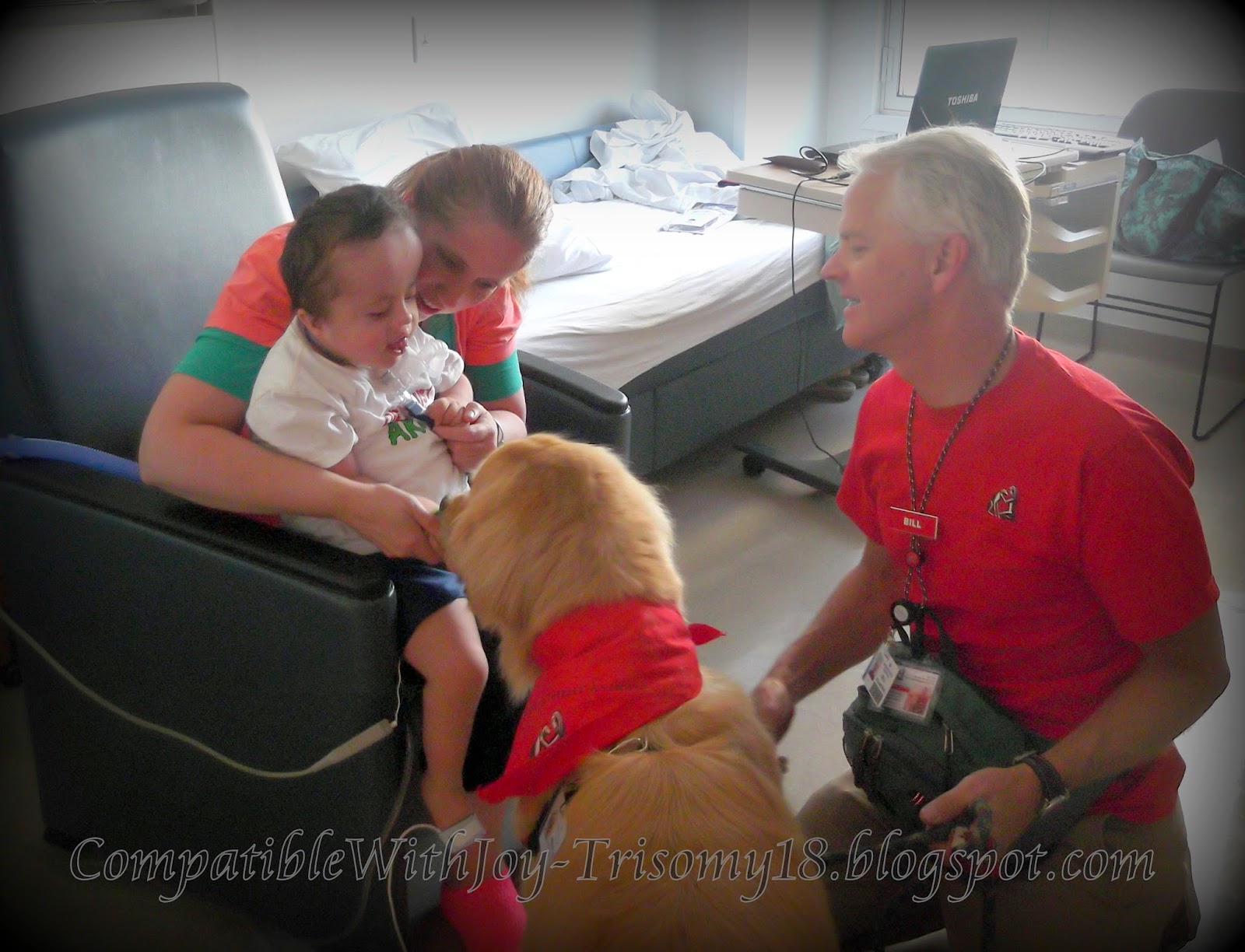 A little bit later, Winston came to visit.  Winston is a therapy dog.  Aaron really has never seen dogs much at all.  Lady, our Dalmatian, was too old, and Daisy, our Cocker, was just too excitable.  And they've both gone on now. 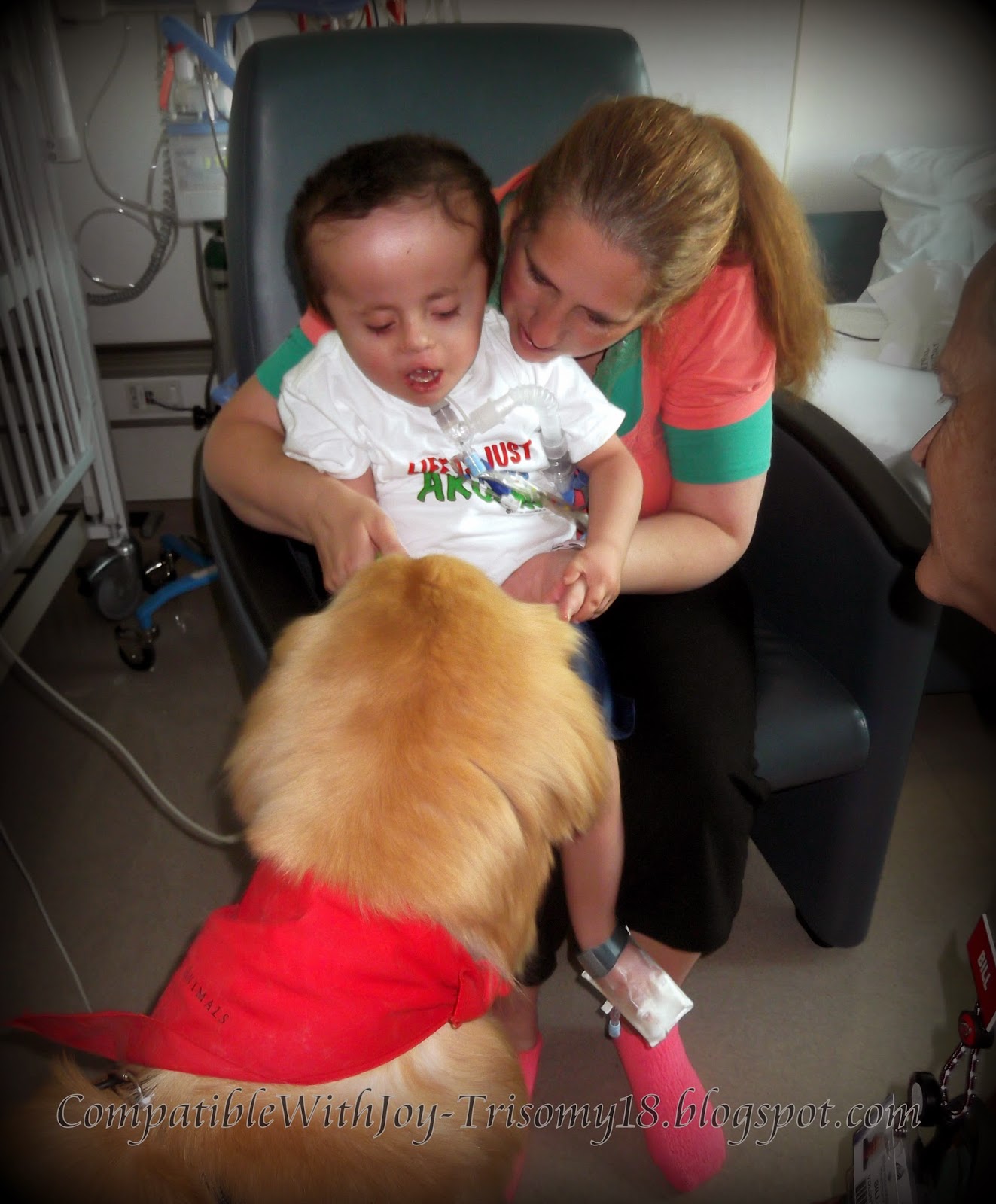 So Winston was really his first up close and personal experience.  Little monkey, his handler gave Aaron some dog treats to feed Winston.  And Aaron would hold them on his palm, mostly open, right until Winston's tongue would try to lap them up. 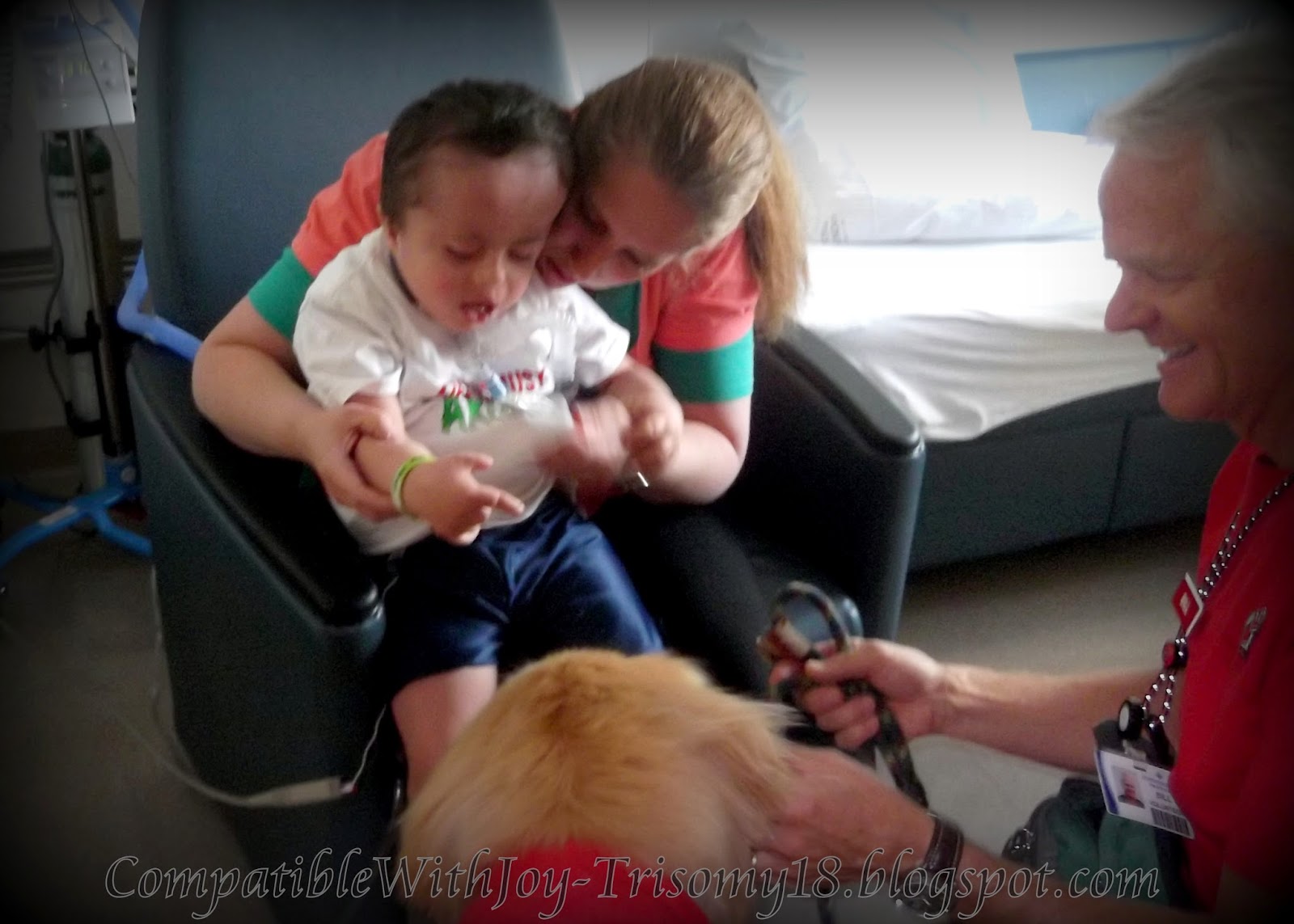 Then that little fist would close up tight!  And I don't think he was scared, because he wasn't trying to pull his hand away.  But he wasn't letting Winston get that treat either.  I had to uncurl his fingers, time and time again.  And he thought it was sooooo funny!


Shortly after that, it was time to come home.  We were there about 15 hours total.  Talk about a record for hospital admits for us.  And while he did have another bad episode on Saturday, it wasn't quite as bad, and I was able to rescue him here at home.  So yea on that one! 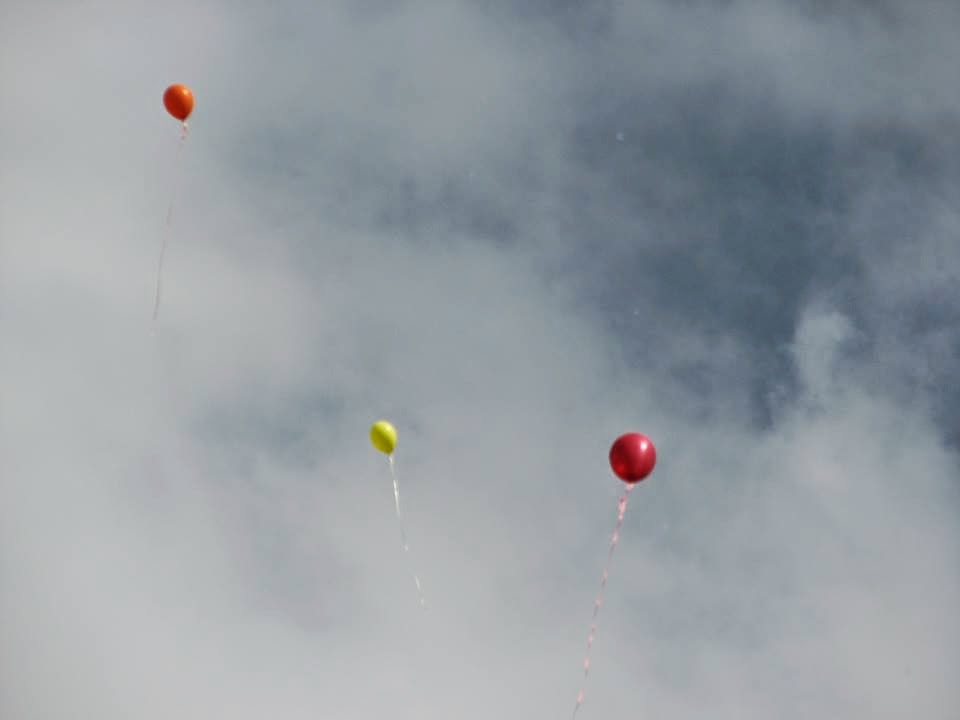 Anyway, since we weren't up to a party, a couple friends of his released some balloons for us, to send to all of his angel friends to play with.  They also drew some cute pictures on their sidewalk to share with us. 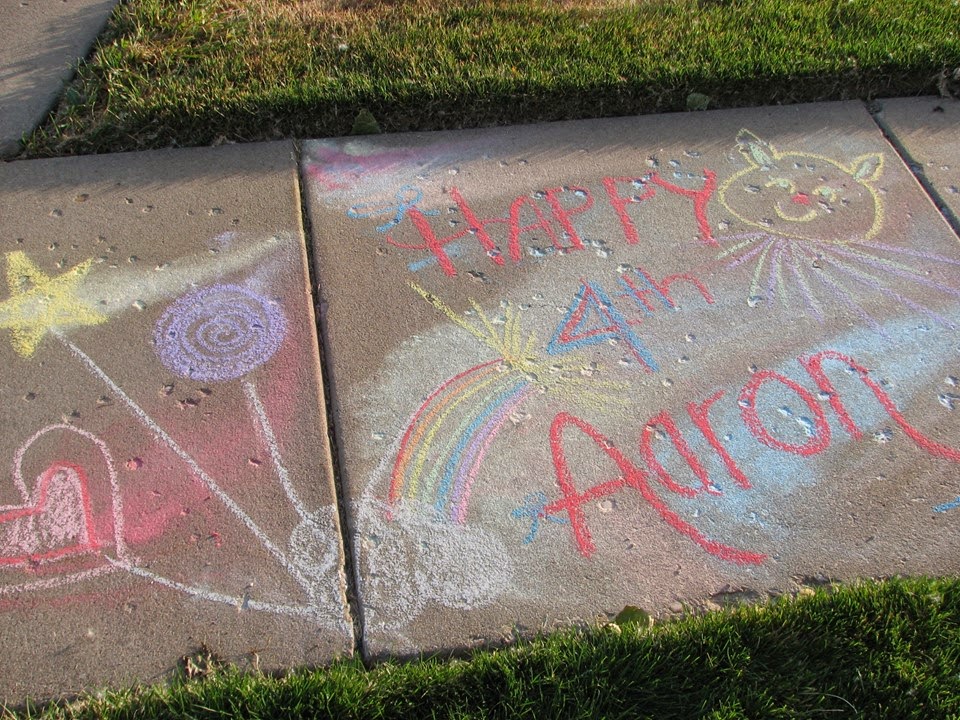 Can I just say, this kind of thing really touches my heart?  I'm so grateful they took the time out of their day to do this.  This mom is also a special needs mom.  It's not like she was just sitting around, wondering what the heck to do with her time on Friday.  But she took some time to brighten our lives. 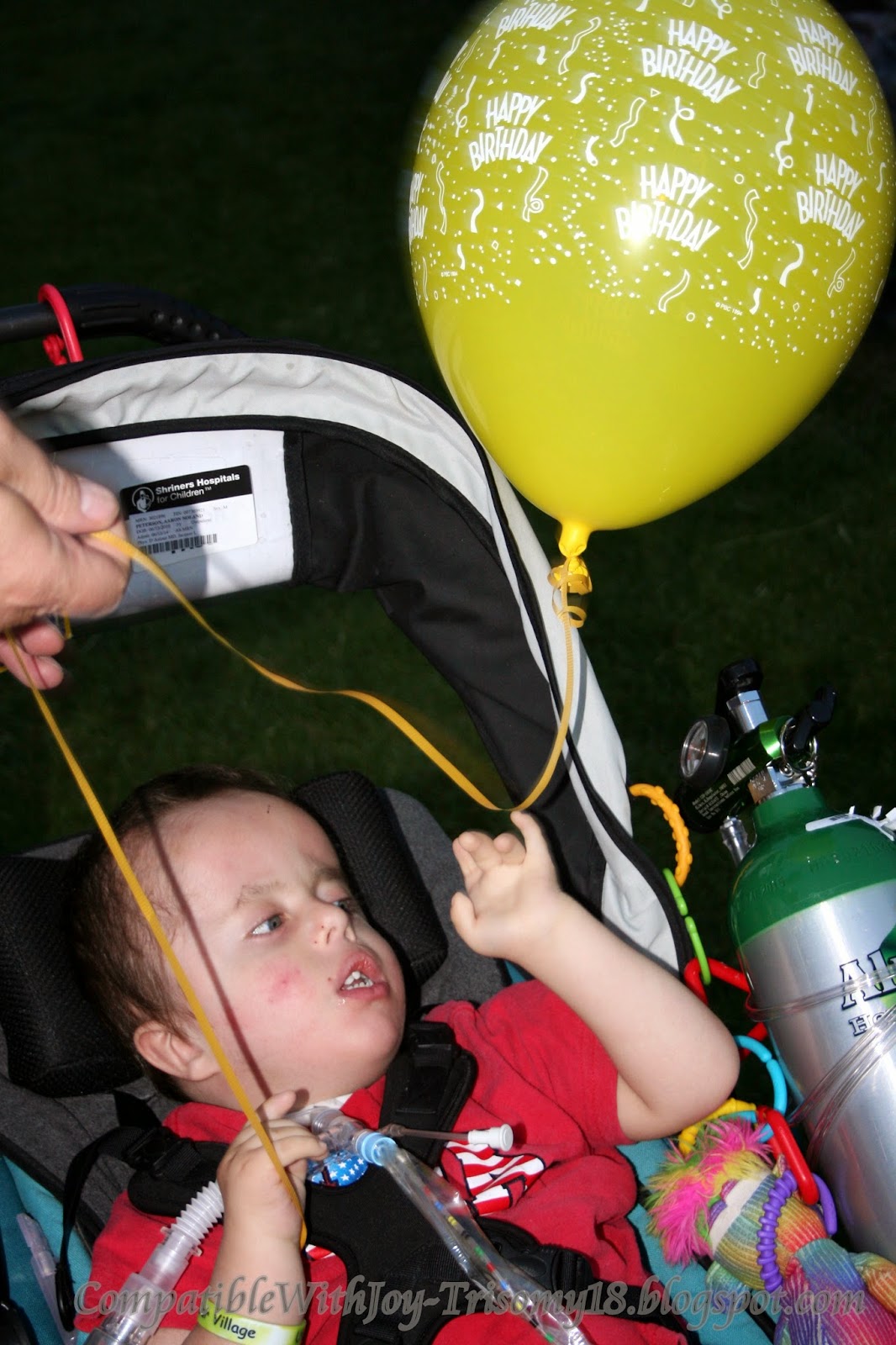 When we got home, Grandma Wiess had sent some balloons that we let off, too.  It was just us, but that's okay.  And I'm guessing those angels were excited because the winds carried them off really fast! 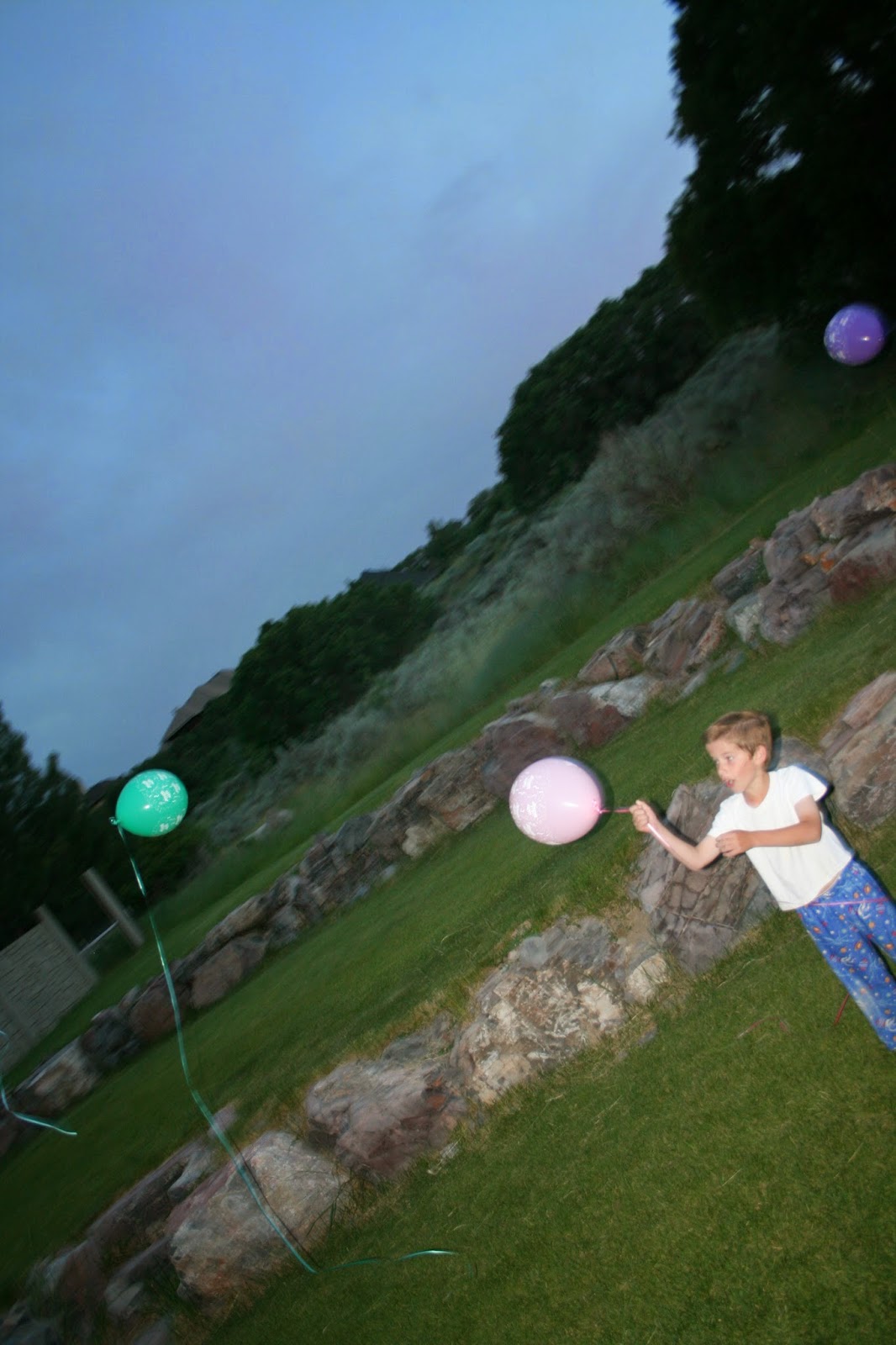 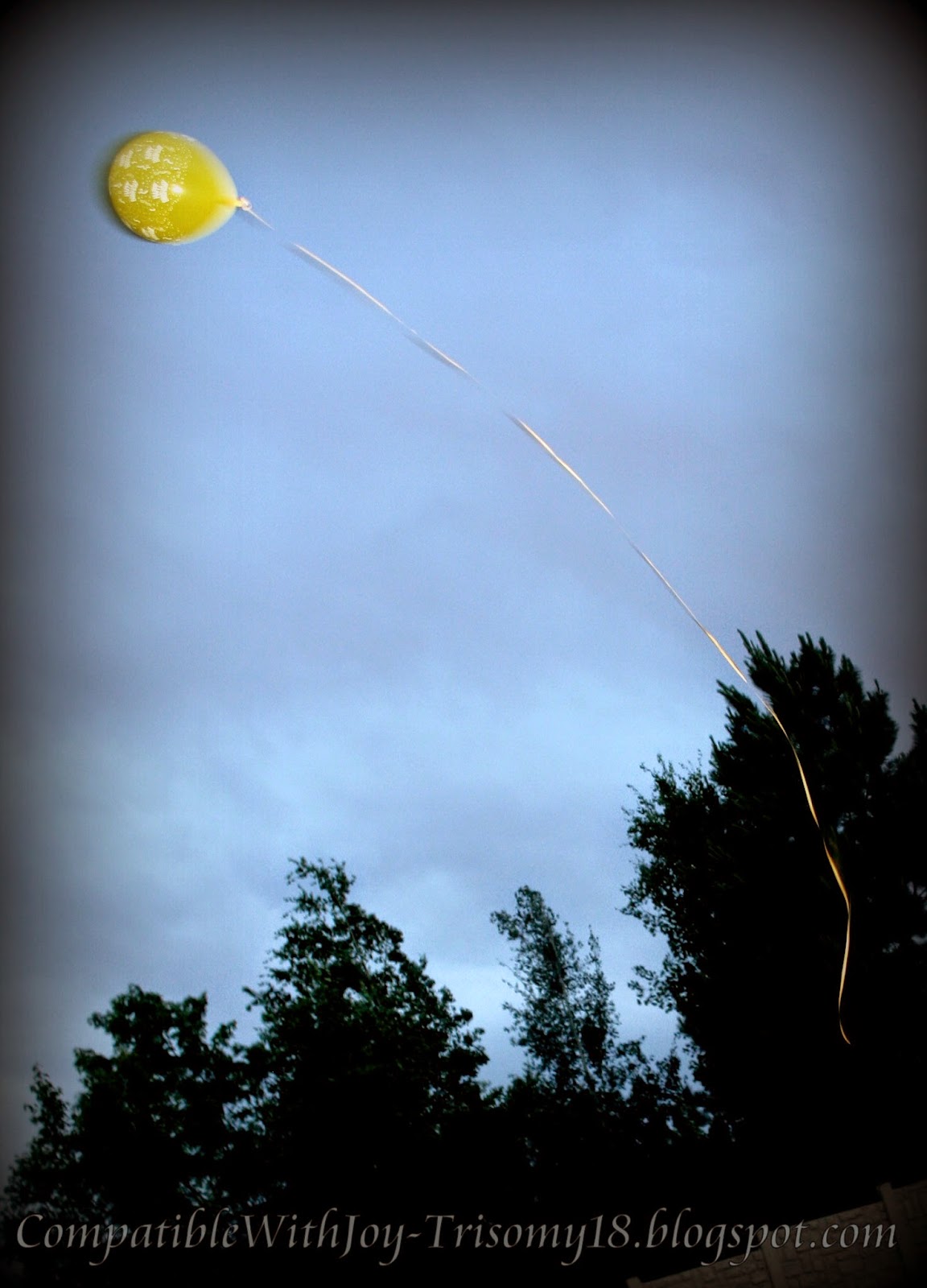 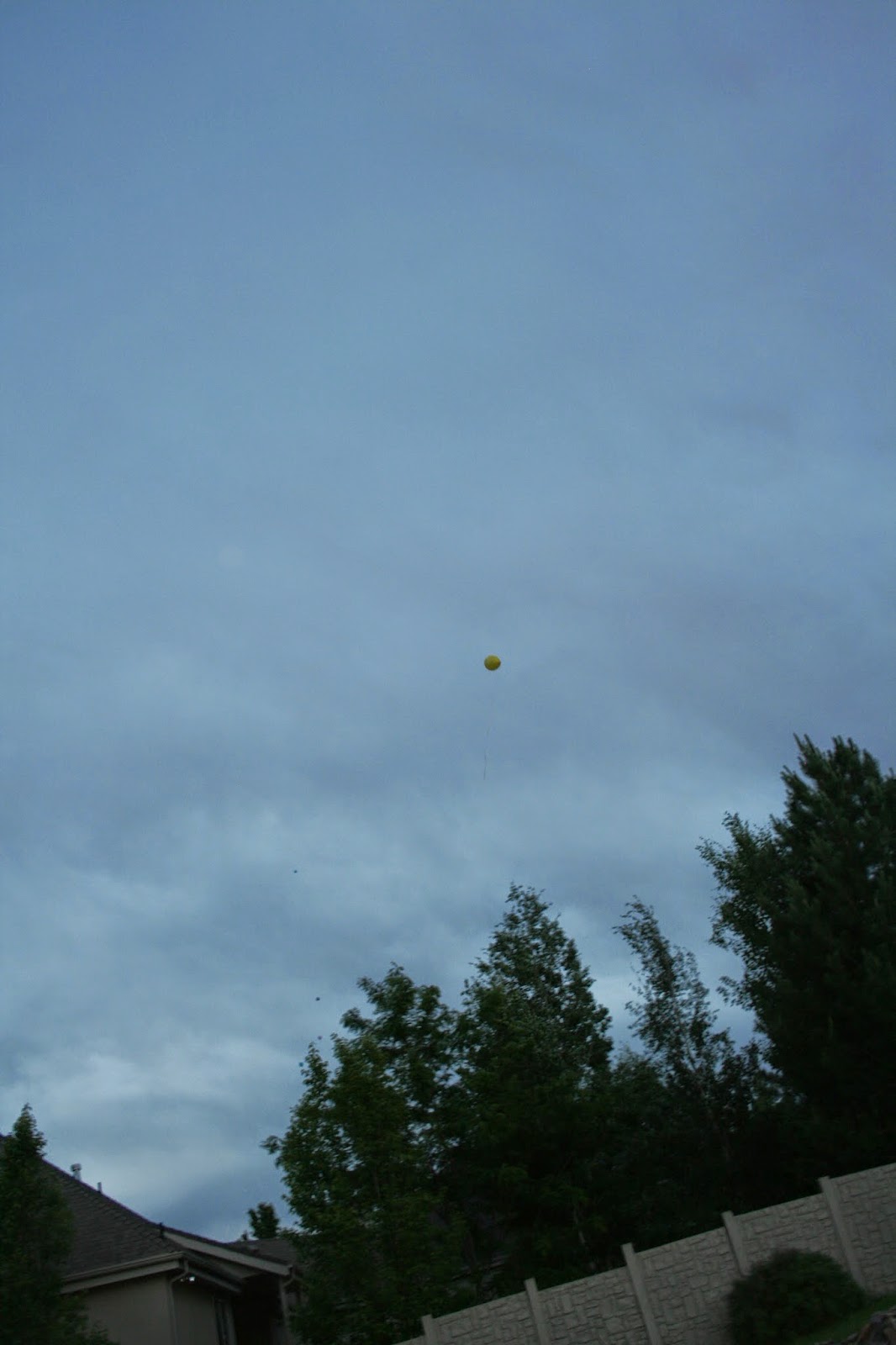 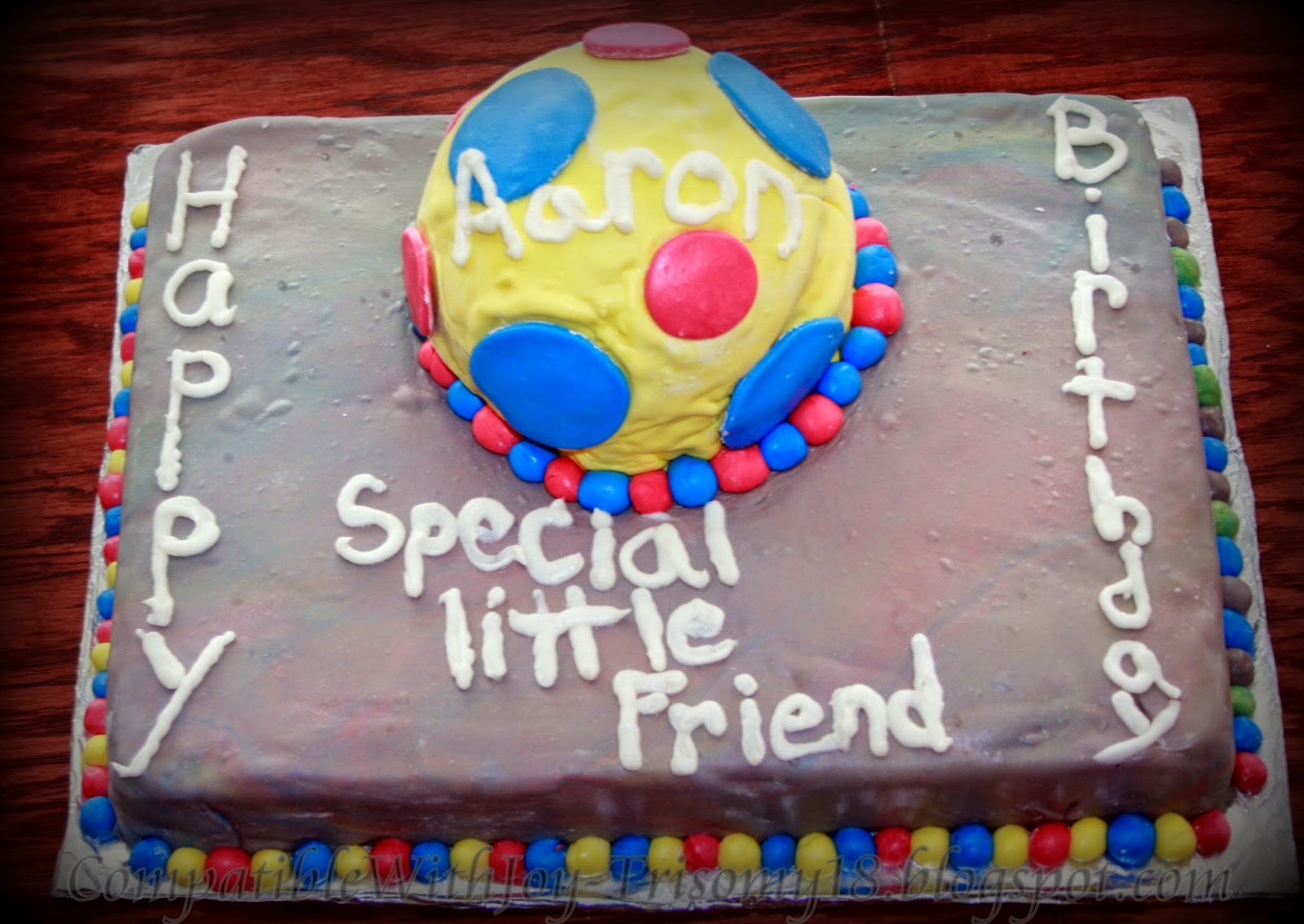 Then it was cake time!  There's a wonderful organization called "Icing Smiles" which organizes bakers and connects them with families who have children with special needs.  One of their bakers made Aaron's cake for us.  She took his love of balls and bright colors and created a really fun cake! 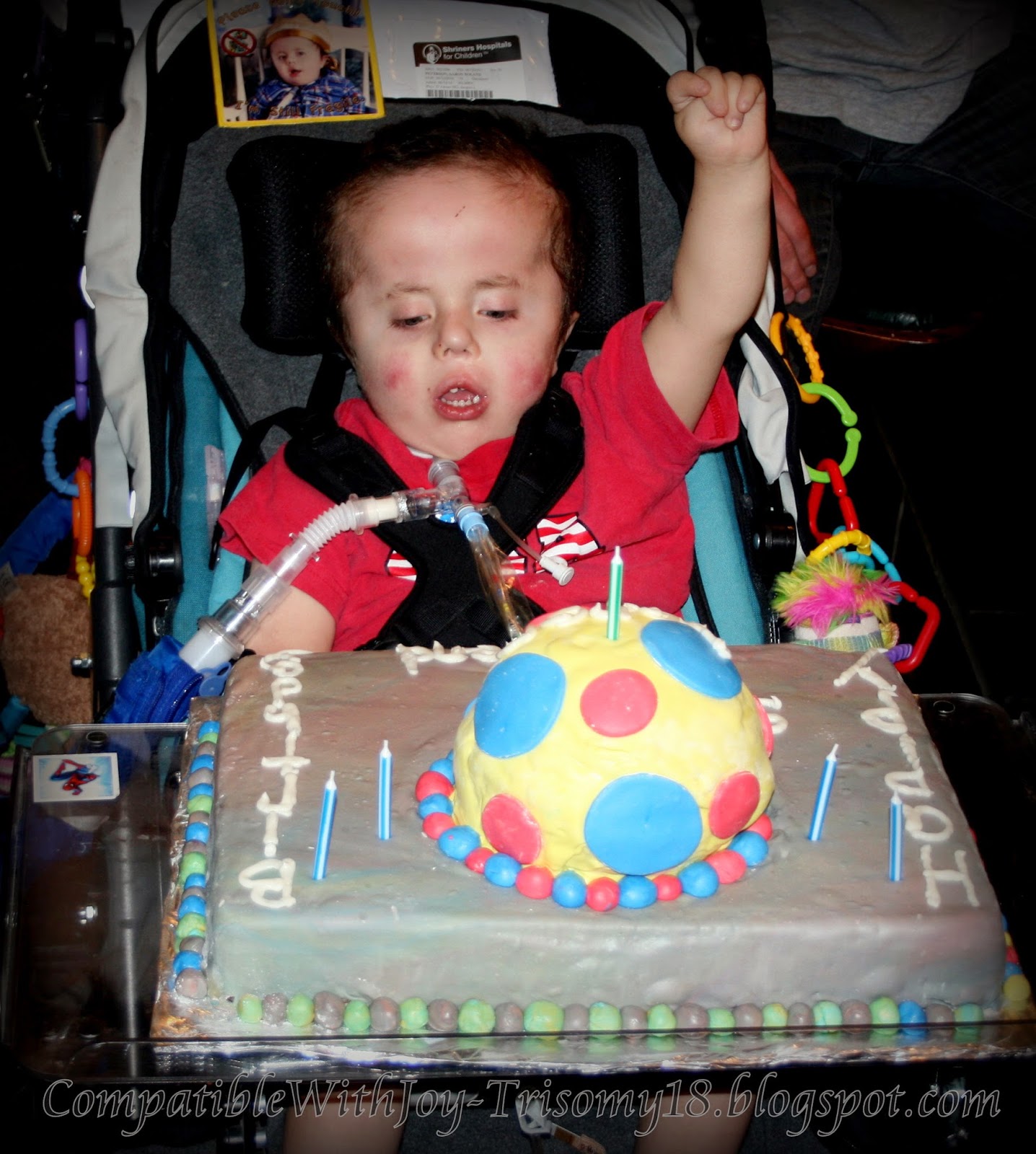 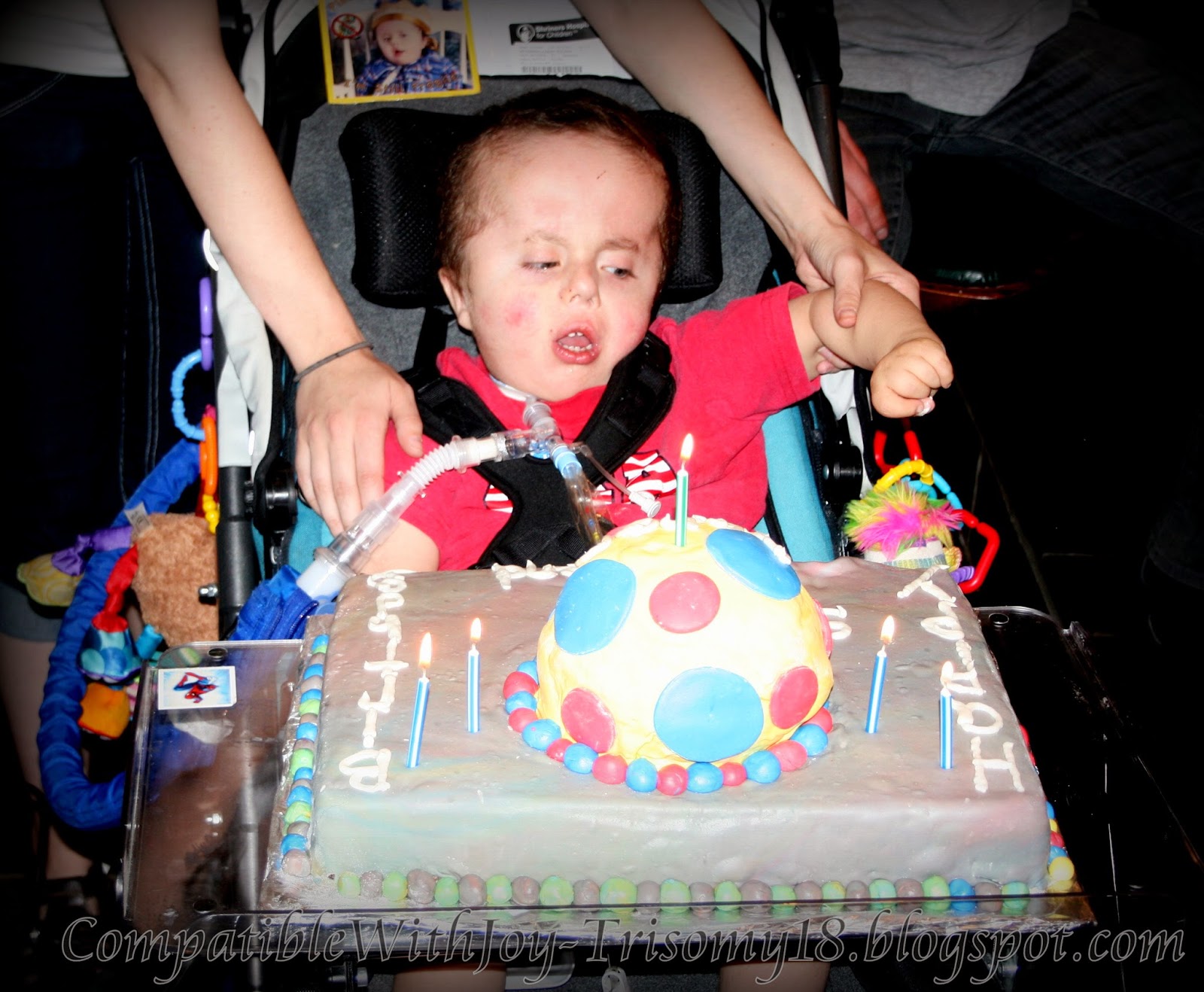 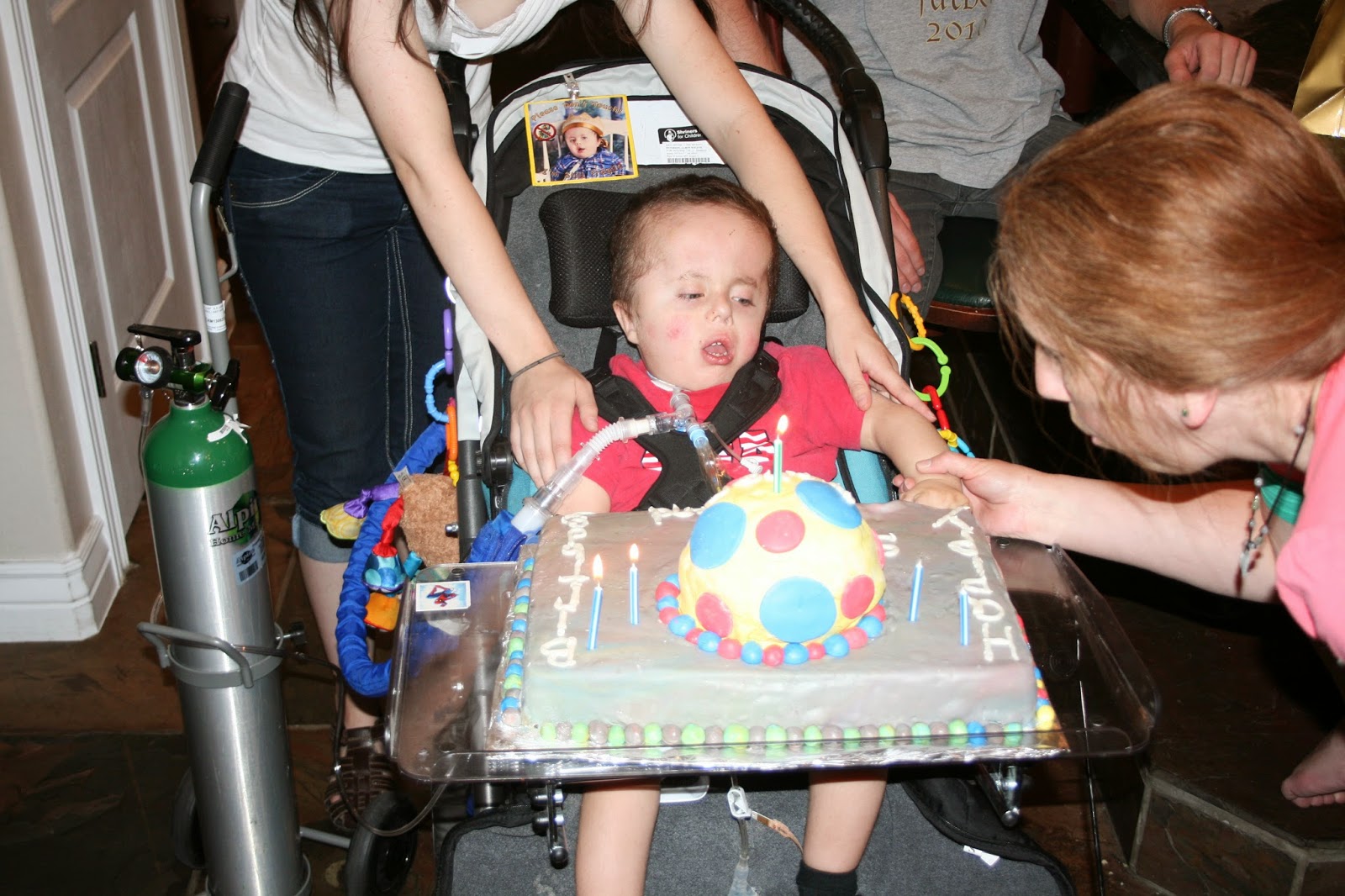 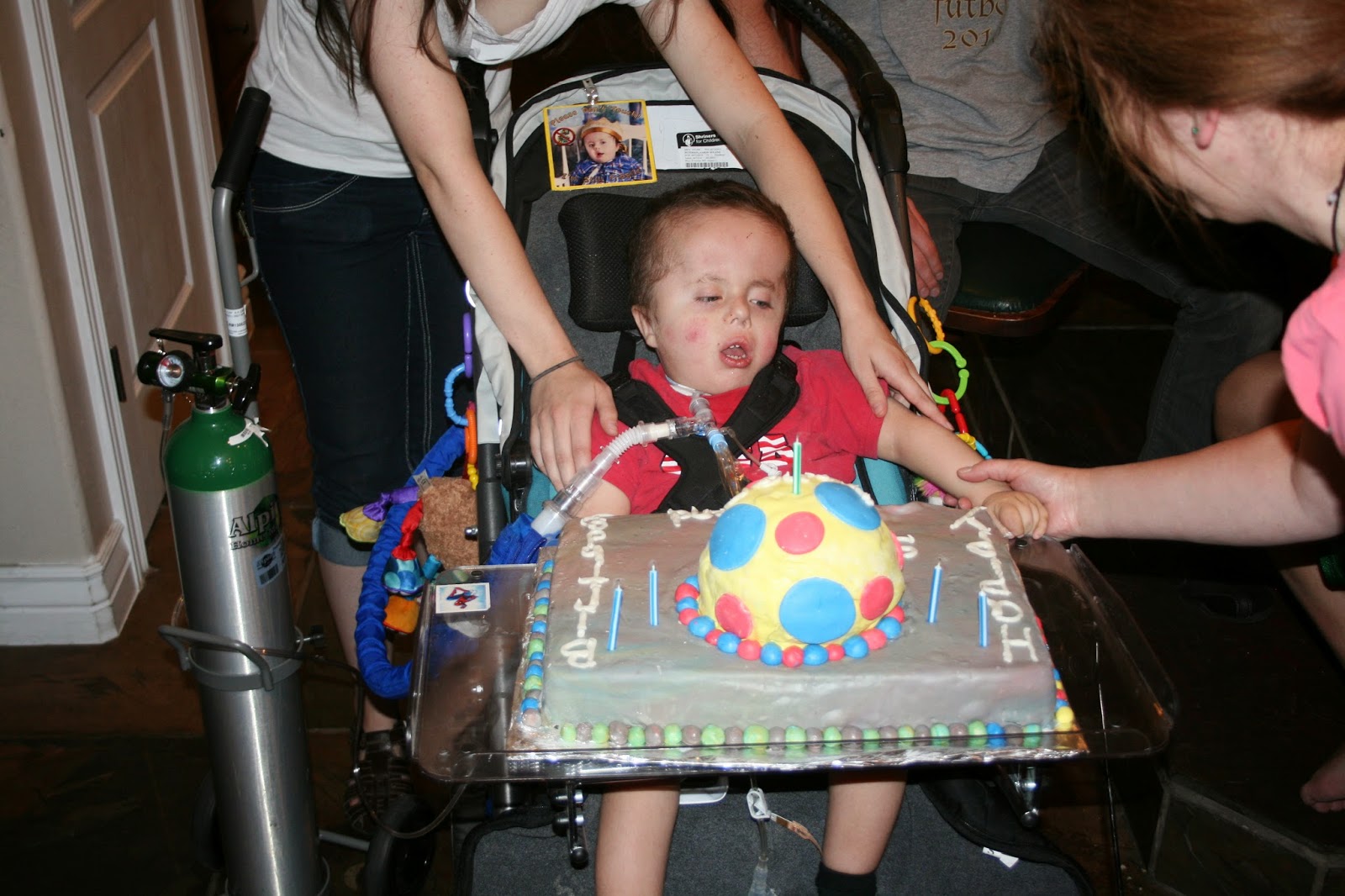 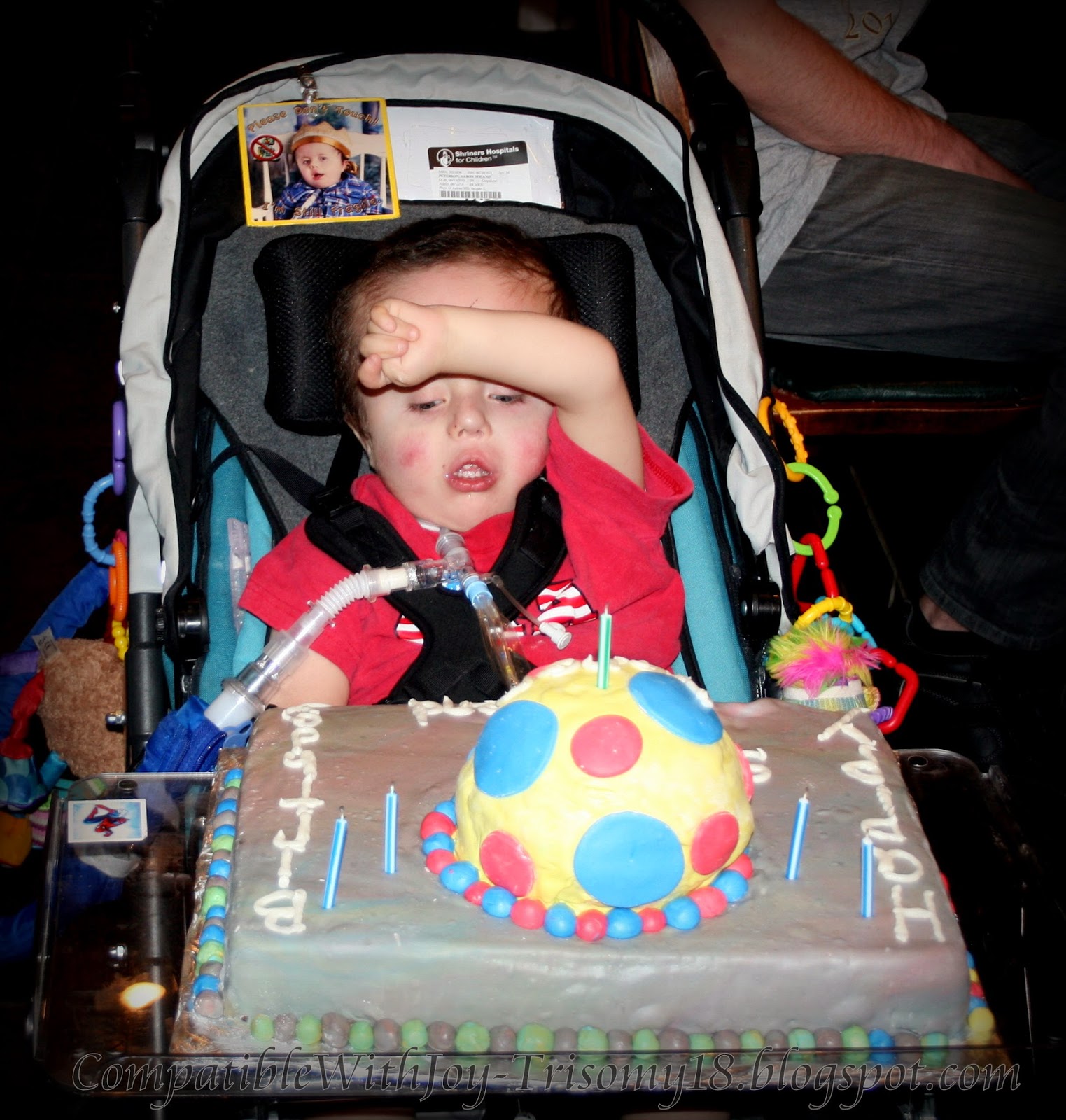 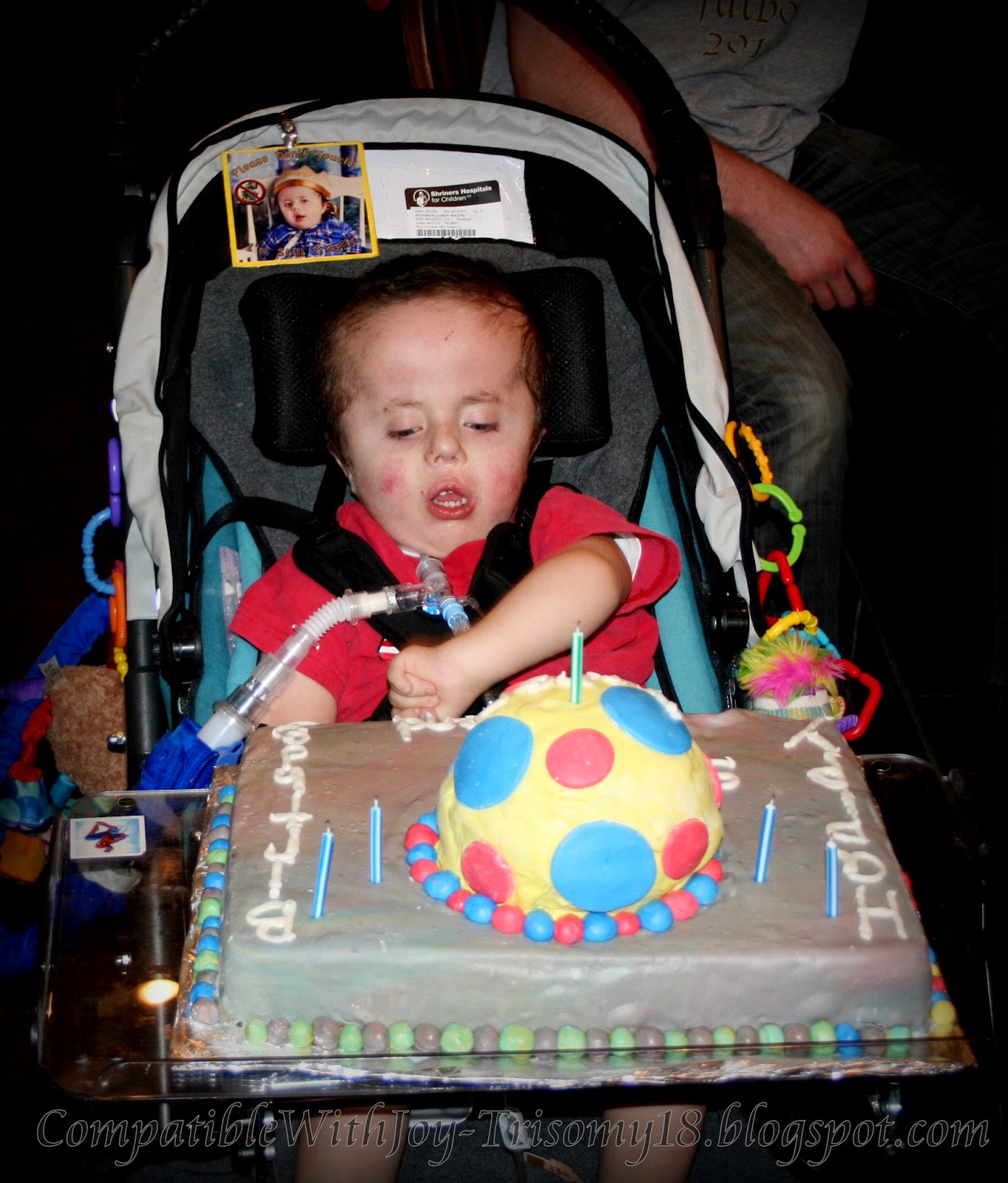 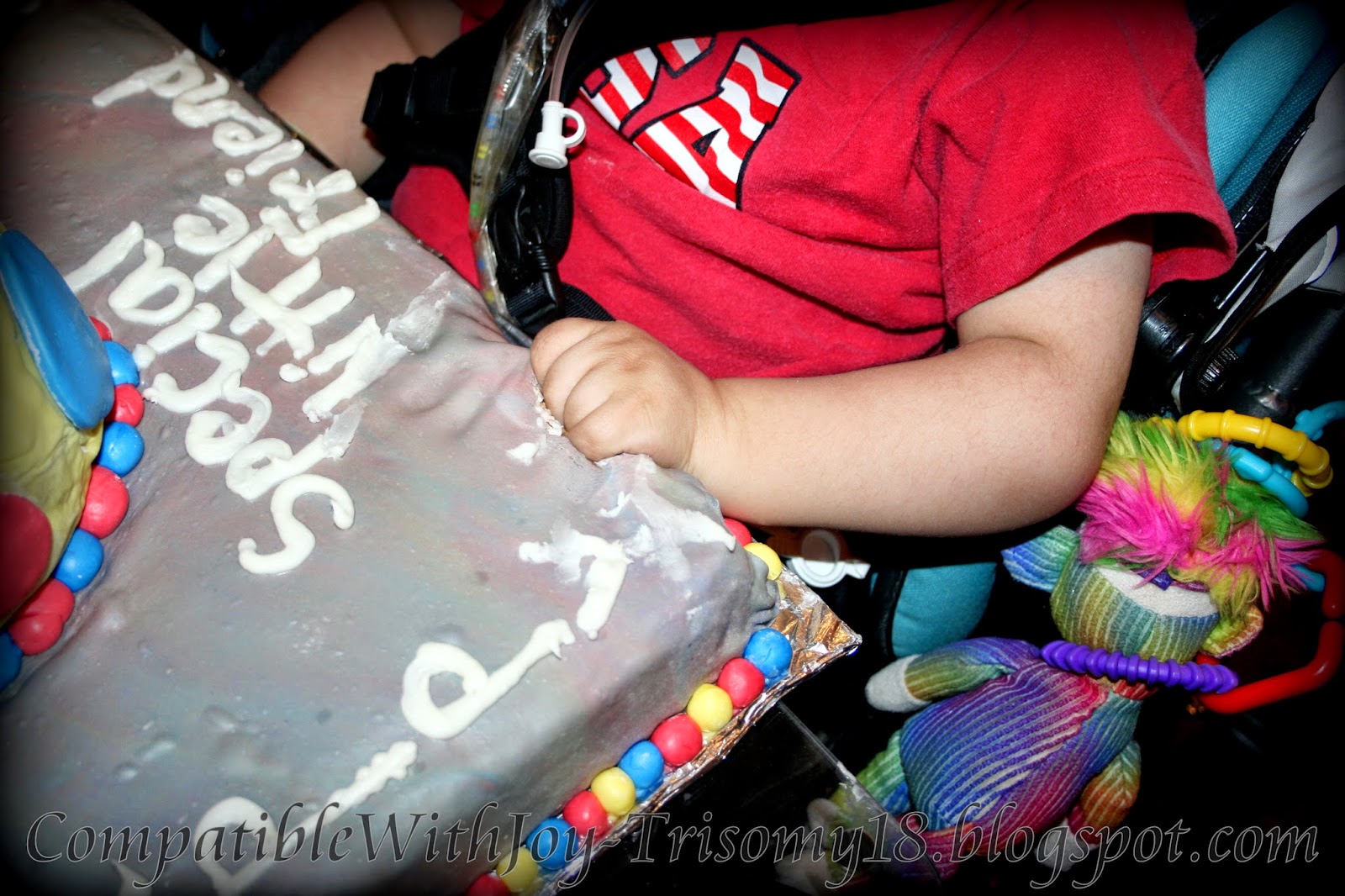 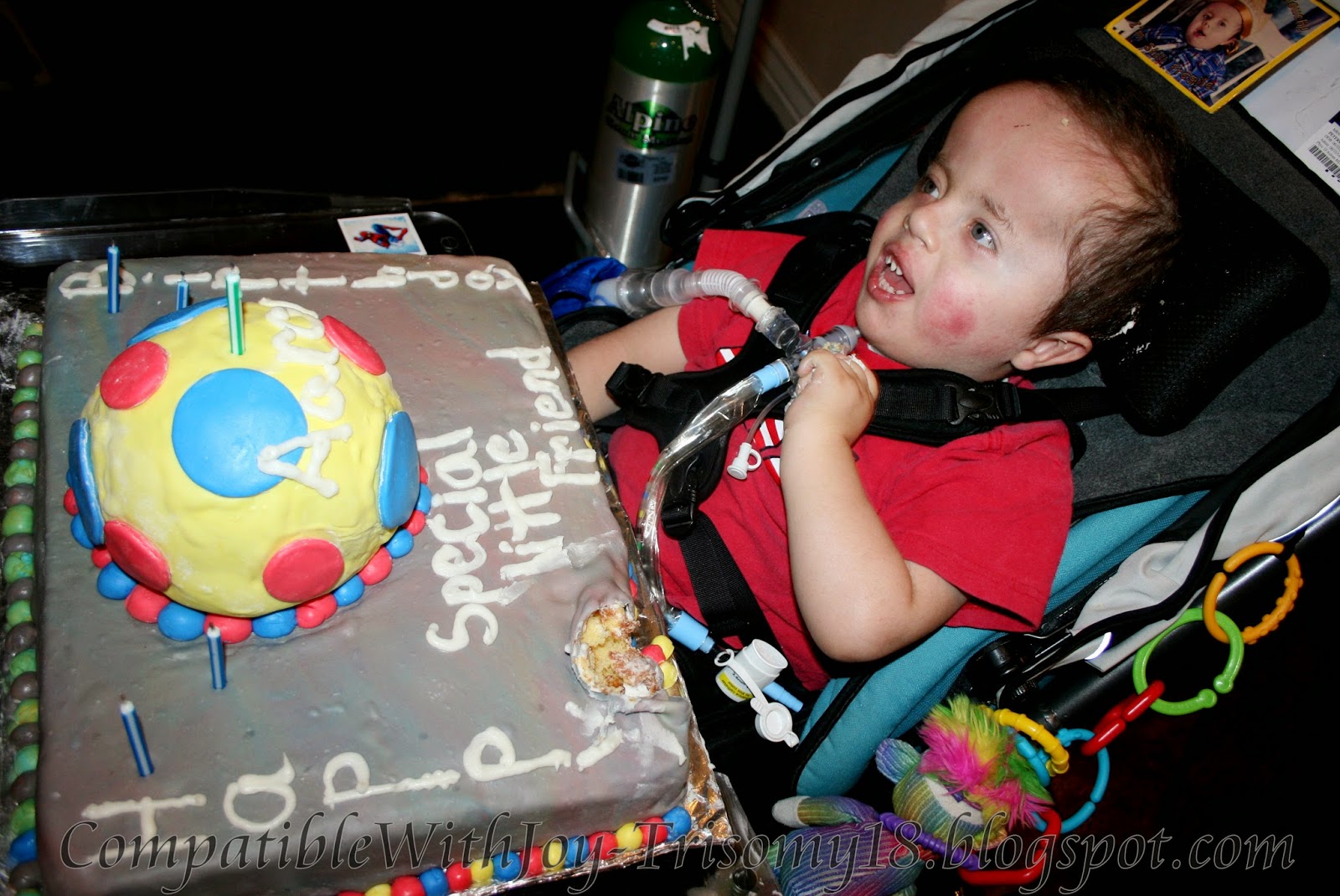 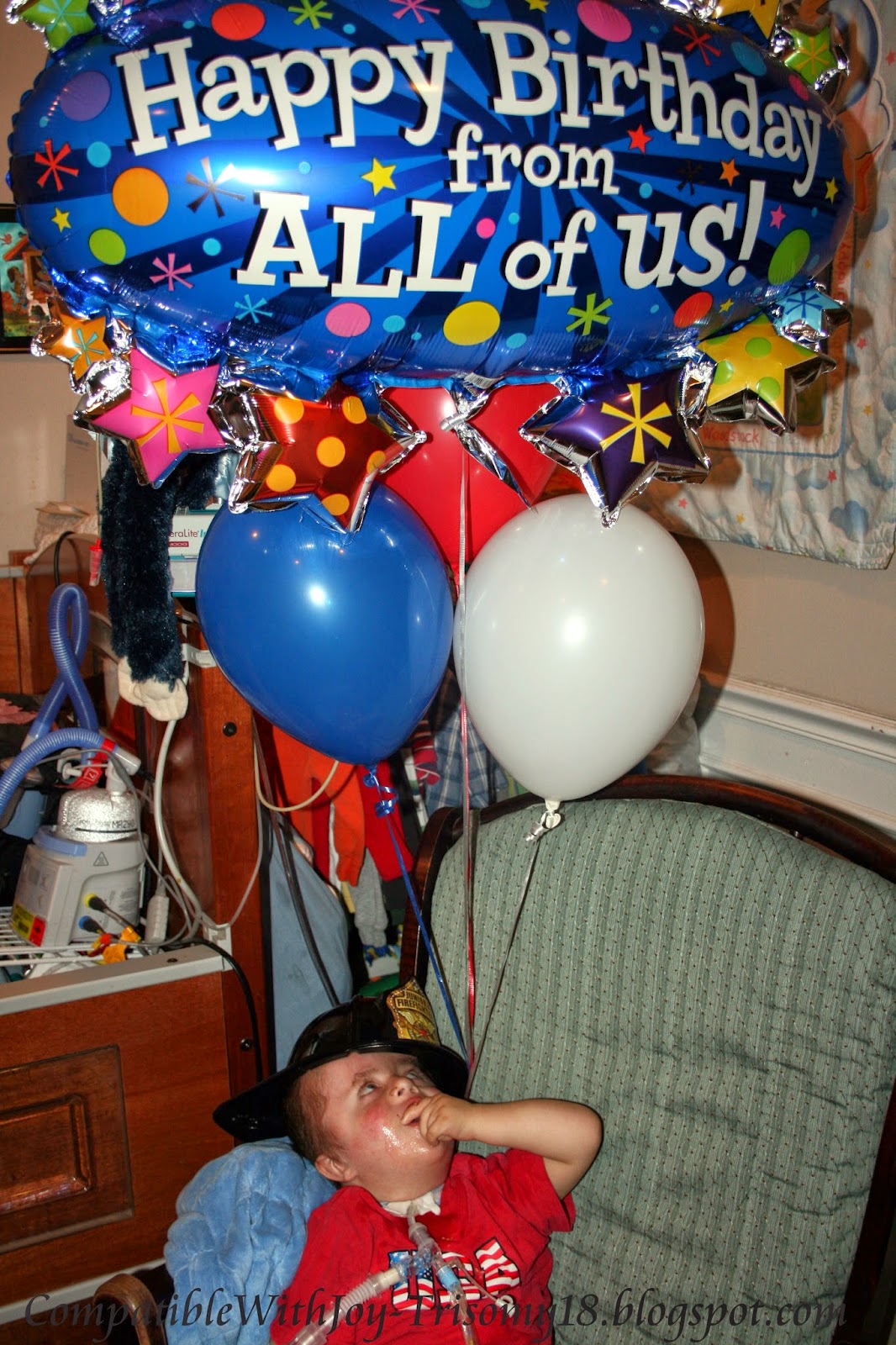 And those balloons he loves?  Check out what the paramedics brought by.  These were the same guys who transported us the night before, the ones who were there and willing to do whatever was needed to keep our little guy alive, the ones who thought they might have to. 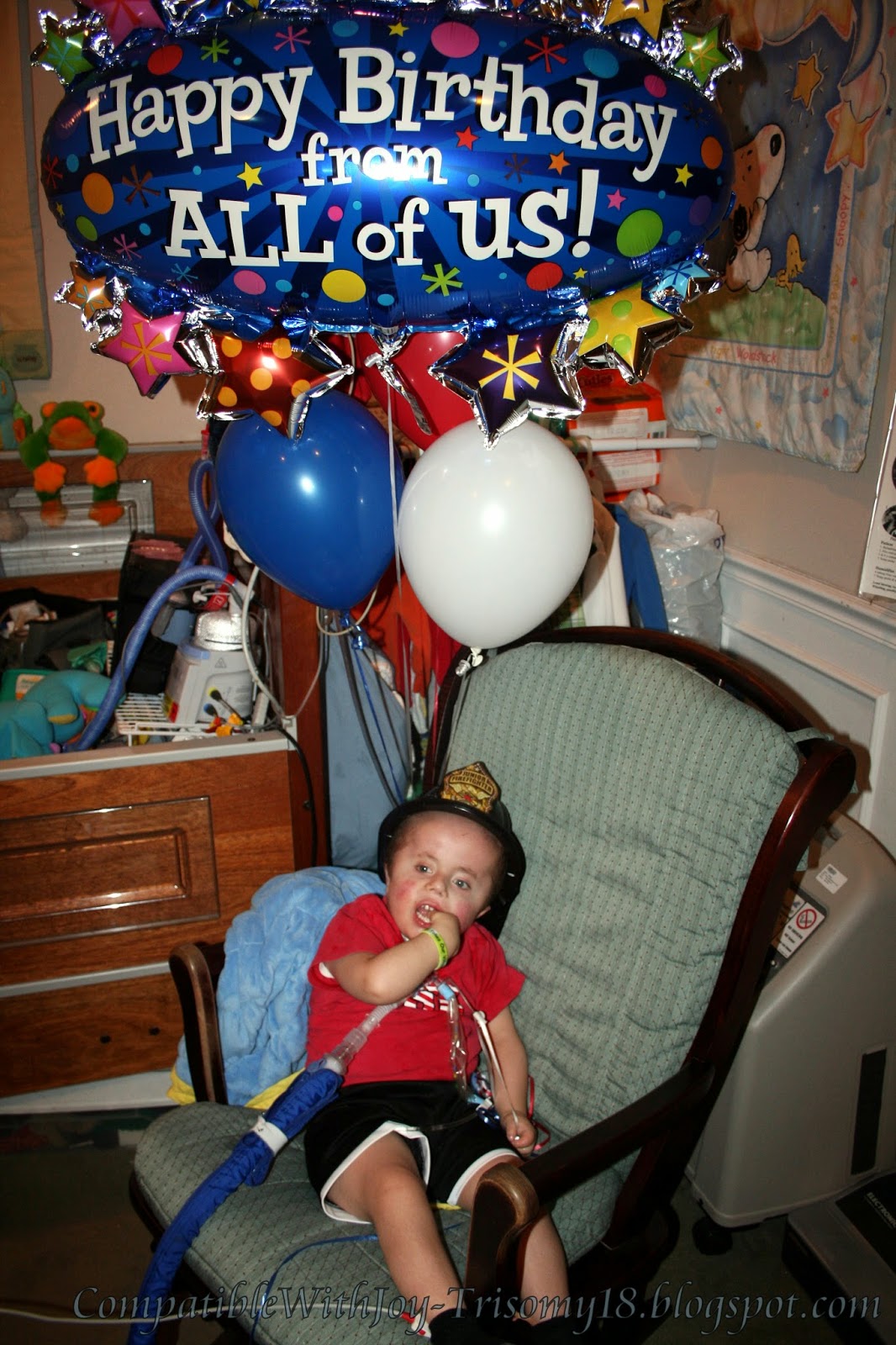 I mentioned before that it was very telling that they asked if I wanted to stop at a closer hospital to stabilize him, and that they didn't want him in his car seat, because frankly, you can't do CPR or put in lines very well when a patient is tied into a car seat.

But we didn't have to.  Instead, he's now back at home, and those balloons are being whipped around the bed every chance he gets!   I think I'm going to be paying a visit to the fire station this week with some goodies as a small token of a very big thank you!

So in the end, while it wasn't the day I planned for, that's okay.  We still got to celebrate with him, help him send off his balloon, laugh as he played with other balloons.  Hold him, sing to him, grin as he attacked his cake, clean him up afterwards.  Help him open presents, blow out his candles, and tuck him in bed.

I wasn't decorating his grave.  I wasn't choosing a headstone.  I wasn't sending a balloon off to him.  And so, it was a very good day, indeed.


Life may not be the party we hoped for,
but while we're here we should dance.
~Author Unknown


Posted by CompatibleWithJoy at 9:32 PM