Mother of the Year Award! 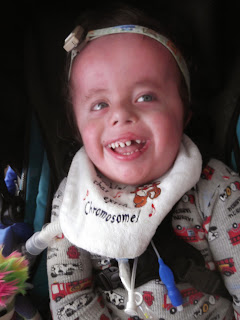 And the Mother of the Year Award goes to . . . . . ME!!  Yep, I've definitely got it.  You know that little issue of breathing my son has?  And those all important medications, especially the newest inhaler we added?  Yeah, the one that's made the huge difference since we discovered that his asthma wasn't being well controlled at all.  That one.

Guess what!  We ran out of it.  And I discovered it on Christmas morning!  Oh, joy.  I knew it was a little lower.  And that morning when I went to give it, I thought, maybe I ought to check how many puffs are left.  Zero.  Not just one zero, three zeros.  Zilch, nada, zip.  No medicine.

That's okay.  I always have back-ups.  I try to keep extras of everything on hand because you just never know.  Um, but apparently not this time, not this med.  And not only is the pharmacy not open on Christmas, it's not one they usually stock.  It was Friday morning before I could pick up more.

Now, I don't know why it was gone.  Even if we hadn't been in the hospital in November, I shouldn't have run out before the end of the month, the very end.  But that's neither here nor there, because it was gone.

Fortunately, I did still have his previous maintenance med, the Flovent.  The difference between it and his new one (Advair) is that Advair also has an albuterol component in it.  So we went back to the Flovent and figured we'd probably have to do some rescuing during the time. And I was right.

Let me tell you, until you've stood over your child, giving a breathing treatment and saying, "Breathe, Kid!" and watching and praying that those oxygen sats start coming up, well, let's just say, it's a whole different kind of "rush."  And frankly, while I'm not thrilled when my other kids' grades are hovering in the low to mid-70's ('cause I know they can do better), I'm much less impressed when Aaron's sats are there.

But we've got it now, and I think he's recovering from his mother's brain lapse.  I did have to rescue him once more today, but he recovered really well.  And while I pulled some really thick, nasty colored junk out of his trach at church, he's pretty happy and vocal in there right now.  (Vocal is good, that means his throat's not swollen.  That happens to all of us when we get sick.)

So onward and upward.  I've labeled all his inhalers with dosing instructions in permanent marker.  I'm hoping that's where things went wrong.  Not sure what else it could have been, so I'm opting for the "honest mistake" possibility.

And I'm grateful that I had the education on how to deal with it, and he didn't suffer more because of my lack of oversight.  And thankfully, life goes on.


As long as the world is turning and spinning,
we're gonna be dizzy and we're gonna make mistakes.
~Mel Brooks
Posted by CompatibleWithJoy at 9:44 PM