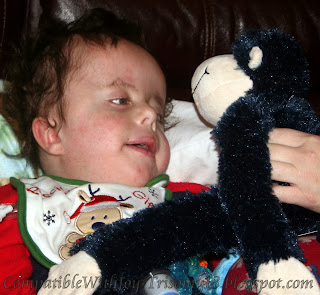 Christmas has come and gone.  Or at least the wrapping and hustle and bustle seems to have.  Today's been a quiet day, even more so because since many insurance adjusters took Christmas Eve off, I've been given today off.  I guess that's the upside of a demand driven industry.  Sometimes there's very large amounts of work (like the past few weeks) and sometimes you get more of a break.  At least it's not boring, right?

Anyway, this year was another good one.  I still need to put out a family newsletter.  It's one of the ways I keep track of what's happened in our lives. 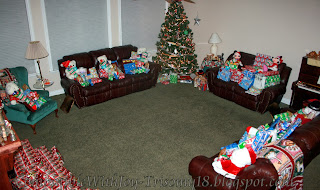 The big highlight yesterday was talking to David and Mary.  They sound so happy!  Most of the time I do just fine with them being gone.  I think it's a product of several factors.  They were already at school for a while before they left, so it wasn't as if we weren't used to them being gone.  And there's the matter of preparing for another, longer, much more permanent "good-by."  Plus, I know they're good people, they've been taught, and more importantly, learned well.  It's said that a mother's job is to put herself out of work.  I think they've got this one.

But, at Christmas, it's harder.  I had to laugh when prepping stockings that it felt like there wasn't enough, I didn't have enough to do because there were only nine and not 11 to fill.  It really did feel like I was forgetting something!  And putting things out was also odd.  Usually, William's and mine go under the tree since the kids take up all the couches and chairs. This time, we got the loveseat. 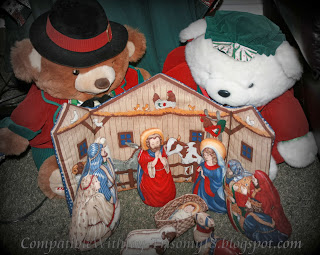 Each child has a Christmas bear from Grandpa Bear and Grandma Wiess, and that marks their presents.  But this year, David's and Mary's really didn't have anyplace to go.  So I set them behind the nativity scene.  I think it was appropriate, and it made me feel a little better.  Symbols of my children with symbols of the Savior that they have dedicated this time in their lives to.

Overshadowing all of this was news I received on Christmas Eve.  See, Death doesn't take a holiday.  He knows no calendar.  On Christmas Eve, a friend's son went Home to have Christmas in Heaven.  And he wasn't the only child to pass in the last week.  They are now free of pain, but their mother's anguish has been magnified. A poignant reminder that this is NOT our home, our ultimate destination.  And I thought of many other friends who have decorated graves of little ones instead of their stockings.  And once again, I am overwhelmed and in awe of the goodness of our Lord.  He knew this life would bring heartache and pain, but through His love, it doesn't have to end here.

And I think that is the true Christmas miracle. 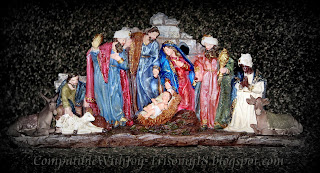