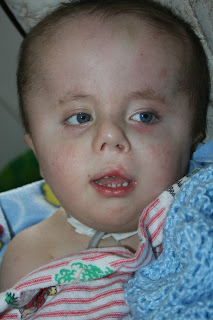 This is liable to be more of a ramble, and possibly not make a lot of sense, so you've been warned.  But then, I'm not sure if anyone besides other special needs moms really read it, so it may make perfect sense to them.

It's an interesting dichotomy I find myself in.  Aaron has had three Christmases, three New Years, two birthdays.  By all signs, he's doing so very well.  We've had all sorts of yuck running through the house including two different cases of influenza.  Aaron?  He just keeps on keeping on.  Not even a cough or sniffle in sight.  (I hope I haven't just jinxed myself.) 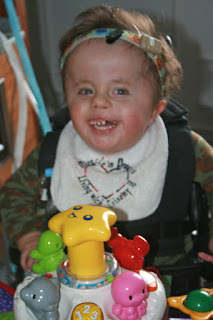 His hair?  Yeah, that's been kind of out of control lately.  Part of me says, so what?  But then the part that's trying to fasten his trach ties behind his neck, and keeps getting them tangled in that mop, says, time to cut that stuff.  So today we did.

And like most of my other boys, he wasn't real impressed.  Unlike the others, who just grump a little and go along with it, he told me in no uncertain terms that it was not his cup of tea.

Then, because he had hair all over, he got a bath.  Yeah, talk about adding insult to injury.  Poor baby.  I think he may think he's Goldilocks at the Three Bears cottage.  Last bath was too hot, this one, too cold.  Hopefully next time mama will get it right.


Here's where it gets kinda strange, or whatever.  As I was shaking out the towel that had been around him during his haircut (and there was a lot of hair!) I wondered, what if this is the last time I get to cut his hair?  I don't know where that came from.  Or actually, maybe I do.


See, there's this big goal, this hope, this dream, for babies like Aaron to make it to their 1st Birthday.  And yes, it's Birthday, with a big ol' capitol B.  Because so few make it that far, it's a HUGE milestone.  For me, it was all the emotion and adrenaline of giving birth.  So after that, everything should be great, right? 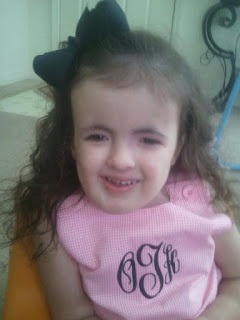 Um, no, not really.  See, just two weeks ago tonight, a sweet five year old girl started coming down with a cold.  Her mom hoped it wouldn't be too tough to fight off.  Just over 48 hours later, Olivia earned her angel wings.  Oh, I ache for Tara and her family.  And I'm scared for me.  I admit it.  It's selfish.

It doesn't help that Aaron's been a bit wonky himself lately.  They're not big things, and if they weren't new, it wouldn't even be a blip on my radar.  But for the past week, if he lies down flat, he drops his sats.  Again, not a lot, but enough that I'm trying to figure out what's going on.  I've put in an email to his trach/vent coordinator at the hospital.  And yes, it's an email, because I'm pretty sure it's not a big deal, at least not yet.  I've also put out a shout-out to other moms in similar situations.  There's been some good feedback, some reassuring, some reinforcing concerns.

It could just be gas.  We all know how good that feels, but if it is, why is he all of a sudden struggling with it?  It could be his heart, his lungs.  It could be as simple as he's outgrown his trach size.  Whatever it is, it's got me on edge.  Not quite the edge of the cliff, but I can see it, and feel it.  And I've never liked heights.

He's also starting the transition process from Early Intervention (those that have been providing all his therapies so far) to the public school system.  Yeah, my baby goes to school next year, crazy.  It's a brand-new world for us, and while it's going to be a really good experience, it's also different.  Another post, another time.

So there you have it, if you're still reading this.  So much going through the brain.  Plus, it doesn't help that we didn't get a letter from David this week.  I know he's fine.  If he wasn't, someone would be in touch, but still, it would be nice to hear from him.  Please keep us in
your prayers.  I know we're watched over.


Every possession and every happiness is
but lent by chance for an uncertain time,
and may therefore be demanded back the next hour.
~Arthur Schopenhauer


Posted by CompatibleWithJoy at 8:51 PM