A Different Kind of Good-by

Many thoughts and feelings rolling through my mind.  Yep, it's one of those "therapy moments" again for me.  I've been feeling a bit fragile and a bit emotional lately.  We're back on the roller-coaster (that ride that I truly do HATE at the amusement park) again.

We've been coasting along really nicely for quite a while.  He alarms, I ignore it.  He alarms again, I send someone to check (or ignore it!) on him.  A third time, I might get up and go in.  And he'll be laughing at me, or blowing raspberries, or something else silly.

But not now.  Now he alarms and if I don't go check myself, I at least sit up quickly and listen to whatever is said in his room.  And I ask, "what's he doing?"  "How are his sats?"  "Is it a good wave pattern?"  Yep, we're back on high alert again.  Dang pulmonary hypertension.

And I'm having "those talks" with him again.  The "I'm not done" talk.  The "you get to go to school next year, and it's soooo cool over there, I went and checked it out" talk.  You know, inspiring him to work harder on those lungs, open them up, let the blood flow through kind of thing.

Tomorrow, David leaves the MTC (missionary training center) for the Oregon Portland mission.  In just over six weeks, Mary will leave.  I miss David, a lot, and I'll miss my Mary, too.  But where a lot of moms are really torn up about their kids leaving, it hasn't been that way for me.  I've been trying to figure it out because, yeah, once again, I'm the weird one.  No, no one has told me that, but I know from what others say, my reaction is outside the norm.  I was talking with Deborah about it yesterday and she pointed out that this was a "different kind of good-by."    See, it was just three years ago yesterday that we met Dr. F at Maternal Fetal Medicine (MFM).  She told us she was almost certain that our baby had something called Trisomy 18.  It was a knife right to my heart.  I had researched his anomalies (I don't like the word "defects") and knew that was a possibility.  When she said that, something confirmed to me that she was right.  I knew it then.   And I knew the odds.

So for the past three years, we have been preparing to say good-by to Aaron.  No, not every day, but it's always there in the back of our minds, lurking in the shadows of the corners in his room.  Yeah, these machines and meds and everything are our new normal, but they're still not completely unobtrusive.  And when we do have to say good-by, it won't be for 18 months or two years.  It will be a whole lot longer than that.  And there won't be phone calls on Mother's Day and Christmas.  There will be no emails or packages.

And I'm thrilled that Mary and David have chosen to take this time to share their lives and love of Jesus with others.  I'm so grateful that they will have a chance to tell people the joy of being part of a family that has been sealed together for all eternity.  Because I know that like saying good-by to David and Mary will not last forever, neither will saying good-by to Aaron.

YES, I am putting it off as long as possible.  YES, it will hurt like nothing I can even imagine.  But I do know I will get to hold him and love him again.  And he will have a perfect body.  He will not depend on machines and medicine and technology to keep his body functioning.

And in the meantime, we'll go on building as many memories as we can.  We will continue trying to cram 70+ years of love and family into whatever time we are given.

Saturday, he went to cheer on Deborah and Jonathan at a ballroom competition.  You should have seen this kid rocking out to the swing music.  Then he really got into it when our kids took the floor.  Yeah, he popped open his vent circuit.  Fortunately, I found the opening pretty quick and got back to video taping.  He loved getting out.  We loved having him there.  And we'll keep on keeping on.  For as long as we possibly can. 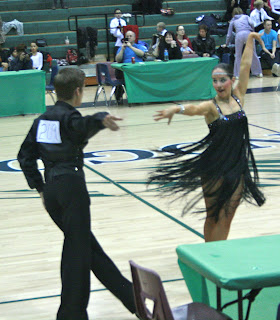 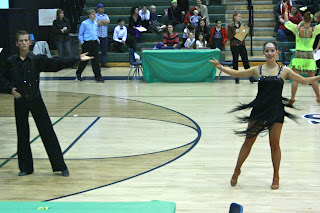 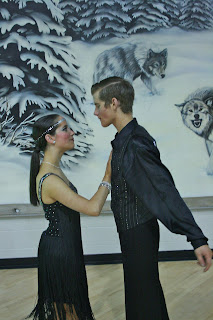