Shriners, a New Hat, and Therapy

I'm afraid this post got written about December 20th.  Then I got distracted and didn't get it posted.  But it's still good, plus a fun, new development at the bottom.  Of course, this was all before he decided to get sick.  So our "talking" therapy has been suspended until he feels better and is more likely to keep breathing without help.  (Yeah, just a minor issue there.)

Aaron has scoliosis.  Yep, his spine curves.  The good news is that while it's not straight by any means, it's not very bad, yet.  Because of his very low muscle tone, he has a hard time supporting himself, which leads to the curvature.  So we've been consulting with the great docs at Shriners and it's been decided to make a brace for him.  It will encircle his torso, but he'll only wear it when he's sitting or standing.  You know, when he needs that extra support.

He thought everything was kinda funny, until they started to wrap him to make the mold for his brace.  Can't say that I blame him.  He was lying on a wide strap  (about 3 inches wide), suspended above a table, and being held by me and another therapist so he couldn't fall off.  That was not great, but okay.  Then they started wrapping him up with some wet fiberglass.  That was NOT okay.

Poor baby was very upset.  In fact, it took me several minutes after it was all over to calm him down, and then he was exhausted.  As soon as he got in his car seat, he was out.

And notice the really cute hat he's wearing!  A dear friend brought it for him.  He'll actually keep it on.  That may be because there's a strap that helps it stay on.  But since he won't wear a coat, the hat plus a blanket do a pretty good jobs of keeping him comfy.


One of his therapists brought some marker paints with her to see if he could/would want to make a picture.  He had so much fun that we've been doing it a lot since then.  I love that we've got a great INEXPENSIVE way to do therapy with him.  Several of his therapists bring iPads to work with him.  And they're great, and he loves them.  But yeah, when the 45 minutes are over and they leave, so does the iPad.  But markers and paper?  Yep, got those here already! 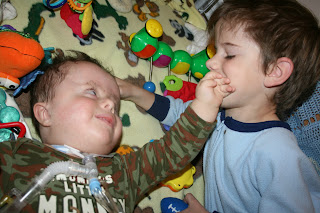 Playing with my brother.  Love my Michael! 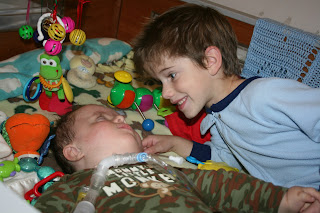 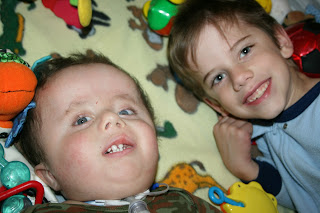 In October, Aaron was given a speaking valve, or PMV.  It's a special valve that goes on the end of his trach when he's not on the ventilator that allows him to make noise with his vocal cords.  The challenge is that he has to learn how to breathe differently.  He has to breathe in through his throat, but then out through his mouth and nose, not his throat.  This valve has a one-way valve which allows him to breath in through it, but not out.  And it's new, weird, different, and HARD.

In October, when he tried it, he would only make it five to ten seconds before he would start to struggle.  And it was five seconds if he was awake and ten if he was asleep and it took that extra five seconds for him to realize that he wasn't happy!

Yesterday, I got it out again, just for gee whiz sake.  And he was doing it!  Granted, only for a few minutes at a time, but he got it!  And a few minutes up from five seconds is huge.  If you've got a little one, just take a look at them and imagine not being able to hear them make any sound.  Yeah, I know the crying and screaming can get on your nerves, but what about the coos and babbles?   And if those cries were silent, I know they would just break your heart.


Here he is, trying to figure out how to use his voice.


So yesterday was a red letter day around here!  His voice is kinda rusty, but yours would be, too, if it'd been over two years since you'd used your vocal cords.  He's not really sure yet how to make many sounds, but a couple times he'd make a different noise and then look so surprised, like, "what was that? Did I do that?"  Just tickled me pink!


Although the world is full of suffering,
it is full also of the overcoming of it.
~Helen Keller
Posted by CompatibleWithJoy at 4:00 AM