A Fruit Ninja or Future Doctor?

Aaron is doing so much better!  We're eight days out from the first yuck we saw, and he seems to be pretty much fully recovered.  Still some nose wiping, but that's about it.  So tomorrow, we'll start trying to change his formula again, but much slower this time. 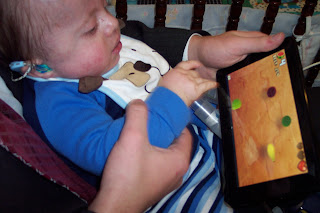 Right now, he and David are in his room playing "fruit ninja" on the Kindle.  I'm not sure who is having more fun, Aaron and David, or me, listening to them.

He also got his bath this morning.  While this Christmas really wasn't a good one for impulse buying, I saw this doctor onesie at Wal-mart and had to get it for him.  He's going to be a doctor when he grows up!  He seemed to think it was a good idea and smiled and wiggled a lot when I suggested it.

﻿ It seems I can either focus on work, or on Aaron's appointments.  Friday, Aaron's appointments won out.  I thought I had it all figured out.  I'd schedule appointments in the morning and work in the afternoon.  Unfortunately, I didn't factor in the emotional energy it takes to do this, so I ended up having to work on Saturday.  Oh, well.

For those who might wonder, this is what I was up to.  Aaron needs a follow-up brain MRI to check the extra fluid in and around his brain, along with an appointment with the neurosurgeon to discuss the findings.  We can't do both on the same day, because he has to have general anesthesia because of his ventilator.  They only do those on two days a week and his surgeon, yeah, you guessed it, only sees patients on two OTHER days in the week.

Next, he needed a follow-up for his hearing with audiology, a follow-up with his ortho at Shriner's for his feet, and an appointment for his next Synergis shot to help protect him against RSV.  He gets those every month for five months during the winter.

Then there was urology.  He has a fairly bad urinary reflux with a long, unpronounceable name.  The test for that is also a repeat test where they'll see if it has improved at all.  Honestly, the ones as bad as his rarely if ever go away without surgery, but that's still a ways down the road.  We're still in watch-and-wait mode right now.  Then it was the studies I'd really like to forget about.  He gets full abdominal ultrasounds every six months to check for tumors.  Yeah, you read that right.  Tumors.  Cancer.  It seems that kids with T18 are more prone to heptoblastoma (liver) and Wilms (kidney) cancers than other kids.  So we check often, and I guess I'm just grateful that it's a non-invasive, painless test.


So that was my Friday, and why I just didn't feel like working after all of that.  At least I didn't have to call pulmonology, the ENT, or his special needs ped.  We see all them on Wednesday at a coordinated care clinic.  And his next echo and cardio appointment is about ten days after that.  So I was on top of some things already and had them scheduled.  This kid needs his own secretary.  Keeping up with him is a full-time job all by itself.


Posted by CompatibleWithJoy at 11:52 AM