What is the Answer? Are There Answers? 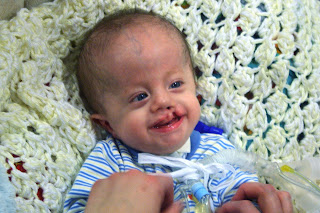 I have a lot of friends, casual friends, or maybe circumstantial friends.  I don’t mean shallow people, but people whose company I really enjoy when I’m around them, but am only around them at certain times of the year.  Like my soccer mom friends, or my baseball mom friends.  We have fun laughing and talking, and help each other out with rides to practices and games, but really don’t see each other much in the off-season.  See, they’re busy with their families, and I am with mine.  Not to mention that just over a year ago I kinda checked out emotionally, and really checked out physically ten months ago.  So there are a lot of people I once connected with that knew I was pregnant, but really haven’t seen me or heard anything about me since Aaron was born.  Or they might have seen us a couple times last fall, but really haven’t had any information since then.  I almost feel like I’m coming out of hibernation.   So then there are the questions.  And they are mean well, but I don’t know how to answer them.
Last week I ran into one of my soccer mom friends at the hospital, as we were taking Aaron in for an echo.  Now, to transport Aaron in the hospital, it requires a respiratory therapist, a nurse or tech, his IV pole, oxygen, suction, monitor, and emergency go bag.  It’s a good thing he’s so tiny, because there’s a lot of equipment on that full size stretcher and there’s not a lot of extra room with all of it.  So I imagine it’s pretty intimidating as we come down the hall.  I don’t usually think much of it.  It’s our normal, but every so often, it hits me how it must look to someone new.  Anyway, she was there, painting a mural on the hospital wall to help make it cheerier.  And doing a great job.  I haven’t seen her since last spring, when I was still pregnant.  She asked if it was my baby, and if he was going to be okay.  I had no idea what to say.  I wanted to stay and talk with her.  We used to have a lot of fun, over several seasons, visiting while our sons played soccer.  But I had to keep going with Aaron.  So it was a quick, “Um, no, not really.”  Because for so many, and me too before this past year, okay means able to run and play and get into trouble.  To grow up healthy and strong.  He is his “okay,”  but not that “okay.”  So what is the answer?  How do you answer questions like that?
People who know what’s going on ask, “How is Aaron?”  And that’s easy to answer. “He’s doing great.”  Or, “He’s kinda squirrely right now.”  Or, “I’m worried and really not sure.”  It’s the others who ask, “Are they ever going to be able to fix your son?”  Or, “Do you know how long he will be like this?”  Because as wonderful and blessed as we are to have him, the doctors can’t fix his tiny body.  And although I’d love for him not to need his life-support equipment, I really hope he’s going to have it for a long time, because if he doesn’t need it, he’s probably passed on.  But how do you convey that although you’re heartbroken at his challenges, you feel so overwhelmingly blessed to have him part of your life?
I’m thinking of taking Aaron to church tomorrow.  I’m not at all worried about him, or taking care of him there.  If there was any question about him not doing well, I’d just stay home.  It’s actually the others I worry about.  Babies and children make noise in church all the time.  It is no secret that sacrament meeting is not really a quiet meeting.  But we generally tune out the whispers and cries, and sometimes loud comments from toddlers still learning.  Aaron won’t do any of that, but he will beep and alarm.  That’s what he does.  And I can’t turn those off.  I can’t suction him in the meeting, but I worry that leaving may cause others to worry.  But it’s nothing to worry about.  It’s really a lot like taking a kid out for a diaper change.  It’s not a big deal, but not something you would do on the church pew.  But while it’s my normal, it’s not other people’s normal.  And I don’t want to cause them to focus on me instead of on the Savior and the reason they’re in church.  Oh, I’m not self-conscious enough to feel like I need to hide, or stay home, but it does give me pause for thought.  I just hope in time that his beeps and bells become like the other kids’ cries:  something to tune out and not even realize are there.
So this is where my mind goes.  This is what I’ve been wondering about.  Which, I guess is much better than wondering if he’ll be able to leave the hospital.  I can do without having to think about that for a long, long time.
Posted by CompatibleWithJoy at 3:27 PM