What a Difference a Few Days Can Make

What a difference a few days can make.  Last week we had a lot of fun.  Wednesday we spent the day at Shriver’s Hospital for Children having Aaron’s hands, feet, & spine evaluated.  We made some cute splints that look a little like biker gloves to help stretch his hands out a bit more.  His spine looks okay for now and his foot needs some help.  He actually has the opposite of a club foot.  It’s called a calcaneovalgus.  A club foot bends in and down.  Aaron’s foot bends up and out.  But essentially the same idea.  We’ll come back in the summer to have it cast.  He’ll need new casts every week or two and I thought we’d just make a day of it each week. 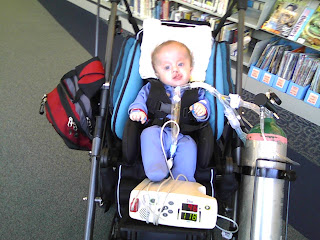 Thursday, Aaron made it to the library for story time.  BIG SMILES.  He was so excited to be getting out with his brother. 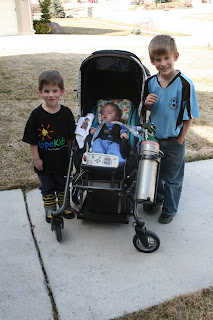 Friday was a gorgeous day and Andrew and Michael helped me take Aaron out on a walk around the block. 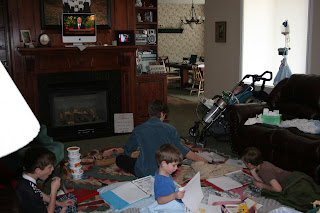 Saturday was General Conference, or jammie church.   We brought Aaron in to watch with us.  Such a great experience to have him here.  One year ago, I was making his blanket and hoping and praying he would have a chance to use it.  Six months ago, we were inpatient with increased oxygen needs.  Looking back (you know, 20/20 hindsight) he was probably collapsing his airway but we didn’t know it yet.  This time, he got to be part of the experience with us. 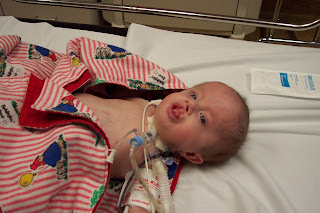 Then Sunday, his heart rate increased a little bit.  Monday, it increased  more and so did his oxygen needs.  By last night, he was having more desats than normal and taking longer to recover.  It didn’t seem like it was related to plugging in his lungs.  Three more significant ones over the night, and I was wanting more input this morning.  I called our pediatrician and he called cardiology and now we’re back up at Primary’s.  They’ve pulled his blood gas and taken x-rays.  He’s actually looking okay on 3 liters now, but did have a brief desat about one hour ago.  I’m worried that his pulmonary pressures may be increasing.   When our pediatrician called cardiology this morning, they were talking about wanting a sedated echo.  So now we’re waiting.
Posted by CompatibleWithJoy at 1:32 PM