Updates and Thoughts from This Week 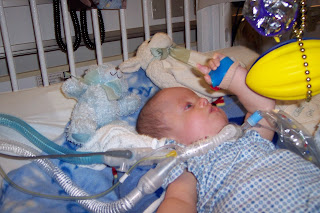 Well, his echo showed no change from January.  Meaning no improvement, but more importantly, no deterioration.  X-rays and labs were also good.  The thought was perhaps, he was outgrowing his sildenafil.  So we watched last night.  He came down a bit on his oxygen, but not to baseline.  He had two significant desats during the night, but slept for most of it.  This morning, he was awake from 7 to 11 and had at least six significant desats.  Then he fell asleep and did much better, but still with more oxygen needs than normal.   By noon, his doctor consulted with cardiology who agreed that he had probably grown enough that he needed more sildenafil, so they increased his dosage.  His last dosage was calculated in January based on a weight of 4.9 kg.  Yesterday he weighed 5.7 kg, a significant increase.  He got his new dose at 2 pm and it has been smooth sailing ever since.  We’ve had a couple of very small desats, but he’s come back up quickly without any increase in oxygen.  We’ve also come down quite a bit on his usage.  It looks like this was the problem and we’ll be home tomorrow. 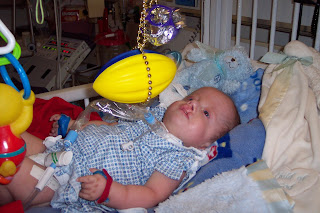 Rainbow Kids is a pallative team here that is available for families with "adverse diagnosis." (Wonderful term, huh?) Anyway, he's wowed them as much as the rest of the hospital staff. Aaron usually has a nerf football that hangs from the beads across his bed, but this time it got left at home. So this afternoon, they brought him another one. He's been happily playing with it for quite some time. This little guy has so much love in him that he just can't help reaching out and touching others. I'm so grateful he decided to come to our home. 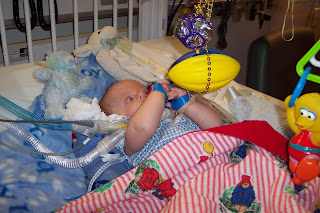 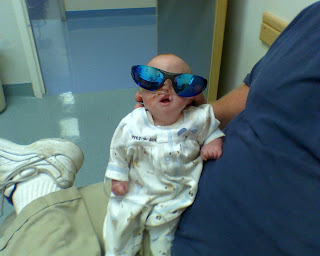 When Aaron was two months old, we met with Dr. John Carey, a renowned medical geneticist who has a special interest in Trisomy 18 & 13.  He told us that if Aaron lived very long, there would come a point where we would stop waiting for death and start planning for life.  I thought for sure I would recognize when I crossed that line.  I knew I hadn’t then.  When the hospital made that appointment for us, I let them because it was easier than trying to explain why I didn’t want it.  I just really hoped that someone would be kind enough to call, or that there was a system in place to notify Dr. Carey when Aaron died.  Because I really didn’t want to get a reminder call about an appointment for my dead baby.  Dead baby.  Who can even think of such a thing?  It’s not natural.  But somewhere I crossed that point.  I realized I had a few months later when I found myself wondering about the logistics of transportation to school for him.  And I realized that if I was worried about school buses and car seats/wheelchairs, I was planning on him living for a long time.
I sometimes feel like Janus with his two faces.  But his look to the future and the past.  Mine looks to the future, but also the immediate present.  I find myself trying to figure out logistics of taking him to a family reunion in Heber for a few days in June, and wondering if it’s possible to take him to Arizona to visit my family in a year or two.  And then he starts acting up like he did on Monday, and I wonder if I’m about to get a real Easter lesson to grow from as I experience Good Friday in my life.  The day when it feels like my whole world crashes down around me and all is dark and hopeless.  I know Sunday will come.  It will come with all the joy and promise of the resurrection.  But I will have to pass through the pain and anguish of a shattered Good Friday to reach that day.  There is no other way than to go through it and work towards the resurrection Sabbath.  And I don’t want to.  I want to put it off as long as I possibly can.  I’m not that strong.  I am not ready.  I don’t know if anyone can ever be ready for it. (ref  Elder Joseph B. Wirthlin “Sunday Will Come” Ensign, Nov 2006.)
Posted by CompatibleWithJoy at 9:58 PM