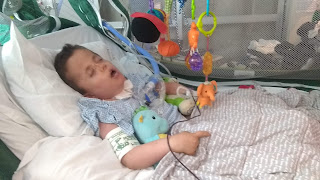 He’s doing a little better, or at least his labs look that way.  They’re all coming back absolutely pristine, including inflammation markers.  Those go up if the body is stressed at all, and they’re currently at 0.  White blood count has come way down, well into the normal range now.

He’s still mounting a fever in the afternoons, and the oxygen needs go up in concert with the fever.  The only thing that anyone can come up with now is that it may be an antibiotic induced fever.  Frankly, I kinda like that answer.

His hematocrit is a bit on the low side, especially for a cardio kiddo, so that very dark line in the picture is a unit of blood that’s currently draining into him.  (So now he’s a vampire??  I guess he’s not drinking it so maybe not.)

Anyway, without anything else that can really be done for him, we’re probably heading home soon, probably Tuesday morning, possibly tomorrow.  We’ll see.  Each time he gets sick like this, it’s harder for him to fight it off, fight back.  But it looks like he’s done it again this time. 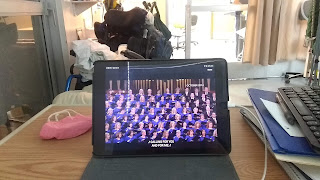 And this weekend was General Conference.  I love the talks, the comfort, the inspiration.  And we’ve been here before for several.  But I think we’ve at least watched more at home than we have here.  With everything going on, I wasn’t able to listen as well I would like.  So grateful for the technology that let’s me go back and listen again, over and over.  It strengthens me, inspires me, and helps me to move forward.

I assure each one of you that the Lord knows you,
that He is aware of your concern and anguish,
and that He loves you —
intimately, deeply, personally, and forever.
M. Russell Ballard

Posted by CompatibleWithJoy at 5:15 PM