Changes Part 2, Or Aaron Gets Sick 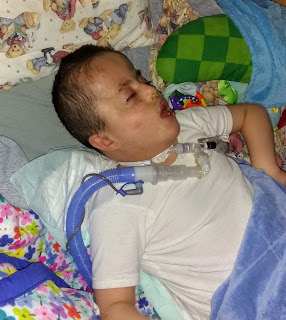 Like I said before, after changing Aaron's food, he seemed to be doing really well, until Tuesday.

Tuesday morning he was a bit whiny, very tired, more than usual.  He went to school, but wasn't really into it.  That night, he was still a bit cranky and his heart rate was higher, too.  Oxygen was still good.  We didn't have any junk in his trach.  His lungs sounded amazing!  But still... 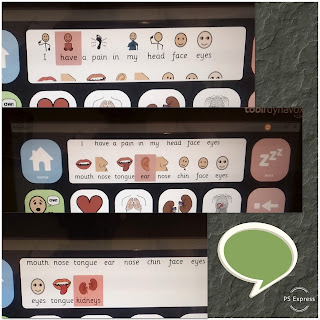 I gave him his Tobii and asked him if he was sick.  He pretty much ignored it and turned over to take a nap.  A little later, we could hear him in his room "speaking."  He was listing out everything that hurt.  Eyes, nose, face, head, hair, ears, nose (again), eyes, eyes, eyes, and then kidneys!  Kidneys??  Yeah.  First of all, apparently he likes the kidney picture according to one of his school nurses, and second, I think he was trying to say he just hurt EVERYWHERE!  Poor kid.

He slept well that night, and again, still nothing to indicate that he was sick.  I actually wondered if he might be just out of sorts, although he was sleeping more than usual. 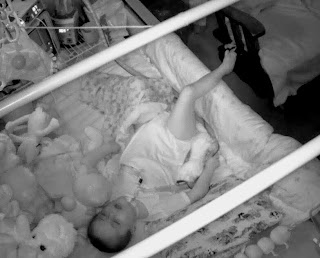 Um, nope, he was sick.  The next day he started running a fever, and his eyes were watering a TON, plus his nose started running.  Yeah, sick.  And my mama heart was worried.  Sooooo many people around here have the flu.  Primary's is SLAMMED right now with all sorts of nasty bugs.  They've been double bunking in some of the PICU rooms, and they've also overflowed into the Neuro Trauma Unit on the same floor.  I've been told the infant unit is double and even triple bunking, and there has to be a medical consult to admit any patient who is over the age of 15.  It's bad right now, really bad.

And Aaron had a fever, and was miserable, and his nose had started....  You know where my mind was going.  I called his ped and got orders for a viral panel and we went down to the hospital.  Let me tell you, this kid has amazing patience and fortitude.  If you've never had a flu test, it's nasty.  They take a big ol' (sorta) flexible swab and go up your nose and to the back near your throat.  Yeah, YUCK!  He's had so many, but just grimaces and shakes his head after.  He's a trooper. 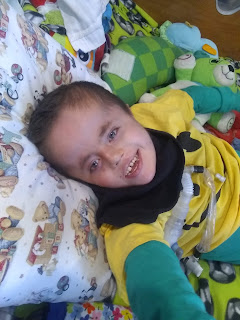 Good news is that it came back negative for flu.  Bad news is that it was positive for a coronavirus.  For most of us, that's a cold, but maybe a cold on steroids.  It's pretty rough.  The particular strain he picked up usually hits either the upper airway and sinuses (nose, eyes, etc) OR the lower down in the lungs.  Fortunately for Aaron, it's lodged in the upper airway.  Unfortunately for him, that means we're suctioning his nose a lot, and he likes that about as much as any little boy would.

But we're at home.  He's back to playing, throwing pies at his brothers and smiling.  As long as the pulmonary hypertension doesn't go out of control this next week, we should be sitting pretty.

And thank goodness we got his food changed over!


Enjoy the pie throwing! (He's using his
eyes to move the cursor.)

“The art of medicine consists in amusing the patient while nature affects the cure.”
Voltaire

Posted by CompatibleWithJoy at 1:11 PM