Changes, Nothing is as Constant as Change 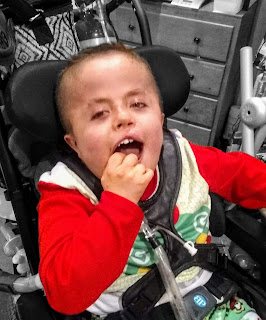 I'm not quite sure how it's been almost a month since I wrote.  But you know how you have a ton of things to do, and because there's so much, you just don't?  And then you get even more, and so you "don't" some more?  Yeah, that might be what's happening here with Aaron.  There's been a lot going on.  Oh, not all at once (mostly) but over time it adds up.  I keep thinking, I then I don't.

But this isn't just to keep others up to date.  It's my way of documenting how things are going, what we're changing, what's happening between those awesome, terrifying moments when things are turning on a dime.  (yeah, read "awesome" with a touch of sarcasm, will ya?)

Anyway, a month or so ago, Aaron started struggling again and we didn't know why.  He's still on the vent 24/7, but he was having some funny desats.  Then he needed more oxygen.  After a little while, we noticed this was more obvious just after eating, but it wasn't necessarily resolving between meals.  He really wasn't plugging, although we had several trach changes in there just to make sure.  His dirty diapers were "okay" but pretty firm, and not as much as he should have.  And his lungs sounded great!  What??

It got worse.  We started needing to bag him occasionally, and then more often, sometimes once a day.  Or he'd be on the tank because he needed more than the ten liters our concentrator goes to.  We'd try albuterol to open his lungs more, suppositories to make sure he was getting "cleaned out."  Sometimes he seemed a little uncomfortable, but still.  More trach changes (with nothing at all in the trach).  What was going on? 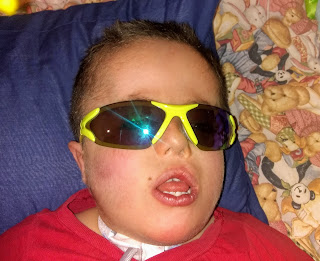 It kinda came to a head last weekend.  He was just a mess as far as his oxygen went, but no other signs that we could see.  I figured we just needed to make a change, and went back to blending his food.  I still had some frozen bone broth and frozen fruits and veggies, and added in the other things I needed.

Now, I stopped blending for a few reasons, mostly my own sanity.  We found what we felt was a really good substitute, an organic, plant based formula that looked a lot like my own blends.  It does have more oils in it than mine does, but that was okay.  And for a while (like late last fall 'til now) he did well on it.  It's not hard to blend for Aaron, really.  It's easier than meal prep for the rest of us, but still.  It's One. More. Thing. on top of everything else.

Except I guess when you eat McDonald's Happy Meals every day, eventually your body isn't too happy.  And that's what I'm going to have to consider this substitute to be.

Given that the rest of his vitals were good, he looked good, he sounded great, he was active and happy and all that stuff, I decided that if I could switch him back to blended diet over the weekend, and just try to baby him through the next few days, maybe we'd be okay.  And that's what we did.  Saturday was kinda rough, but he did okay.  Sunday was a bit better.  Monday was even better.  I think we figured it out.

And apparently, just in time.

I need to put these in two posts because this is already too long.  And like I said, I use the blog for my own records and I'll probably need to find this info again.  I promise, I'll get the next one done quickly.  (I hate books that don't really "end" and leave you waiting for the next installment.)


"Let food be thy medicine and medicine be thy food."
Hippocrates
Posted by CompatibleWithJoy at 11:56 AM