Yep, we’re back, a month and a half after discharge.  Kinda rough.

This one hit us out of the blue, and I won’t lie, it made my thoughts go places no mama’s thoughts should go, mostly because I didn’t see it coming, not much anyway.

Aaron was good, really good, almost all week.  He went to all the concerts, one each night, and loved them.  No problems, no issues.  And being tired out, he slept well at night, too.

Until Friday, that is.  Friday started out like any other day, just fine.  There was a little more suctioning the night before, but our pollen counts are also sky high, so whatever.

And then his nurse called me at work from school. He was running a fever. 101.1  She was suctioning a lot.  He was seizing quite a bit.  And he was maxed out on his oxygen and still not able to maintain his sats.

The call came in one minute before my lunch break, so I quickly explained the situation to the front office and left, promising to be back as soon as I could, but it would probably take a little longer than my 30 minutes.  Raced over to his school, got him home, helped get him set up and went back.  I was a little late, but not much.

Then they asked me if my son was okay, if I was okay.  I didn't know, honestly.


We got the fever down and he slept, pretty much all night, from 1 pm to 7:30 am.  (Seizures will do that to you, wipe you out.). Still it was hard to keep him stable.  We have a big M-90 tank, the size that ambulances run with for emergencies.  We blew through that in less than 24 hours, and often when he wasn’t on it, we were bagging him.  We tried to stay home, we really tried.  Yesterday was Andrew’s last soccer game, there were things that needed to be done at home.  Graduation is coming up, dance festivals, etc.  But eventually I had to throw in the towel and give up.

He’s resting now in the PICU.  It’s not pneumonia, my biggest fear.  It looks viral.  We’ll have to see how it all plays out.  At the moment, this very moment, he’s looking pretty darn good.  But he’s also asleep.  I’m sure that will change when he wakes up.

So Tincture of Time and all that.  We’ll make it through this one, too.  Just needing more support than we can give him at home.

Amazing what a kid will pull to get a “vacation.” 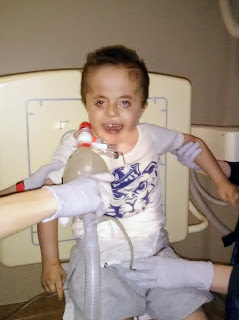 [M]an can accept pleasure only to the extent that he is willing to accept pain...
the rejection of either eliminates both.
~Thea Alexander


Posted by CompatibleWithJoy at 12:43 PM