With kids starting missions, and more to follow as they get old enough, we wanted to get a family picture before everyone heads out.  It's going to be a while (quite a while) before we have everyone back together again.

Now, my guess is that for many the family picture is something that's  a lot of fun.  Those great shots I see  look like they're taken of people who love to have pictures done.  Um, not so much here.  There's a few members of our family that would almost rather have fingernails pulled out than have a picture taken.  But by hook or by crook, I wanted pictures.  So it was going to be done. 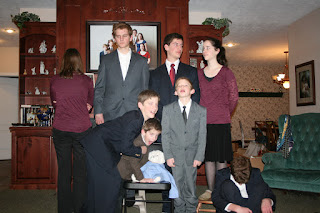 But any show, and yeah, taking this family on the road feels like a show, needs a run-through.  So the agony for some began the night before.  Dress rehearsal time.  With costumes.  No smiles necessary, I guess.  And no footwear requirements either, apparently. 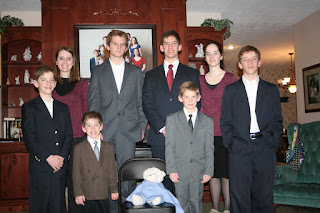 So here you have it.  Aaron got out of it by napping and sending his Payton's bear with his shirt to stand in for him. 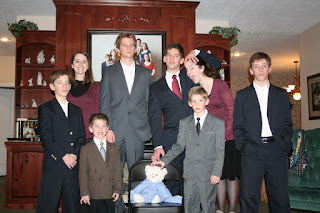 Then after decisions were made, I had my work cut out.  The challenge with deciding that we wanted choices?  Yeah, 16 dress shirts to iron, eight white ones and eight colored ones.  It took a while, I've gotten out of the habit of ironing.  One of the reasons my boys wear suit coats to church?  It hides the majority of the wrinkles in the shirts!  Works well. 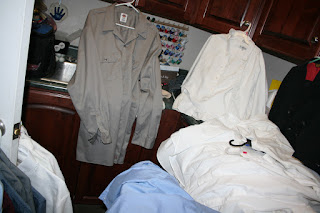 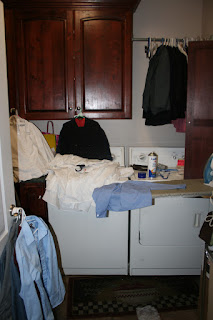 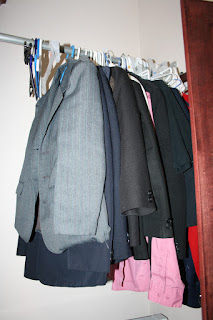 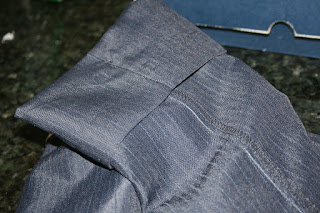 Fastest hem in the west.  Probably not up to Martha Stewart's standards, but then she doesn't have seven boys.  And it only had to stay for an hour or so.  So it worked, sort of.  By the end of the evening it was undone.  But hey, it lasted while it counted! 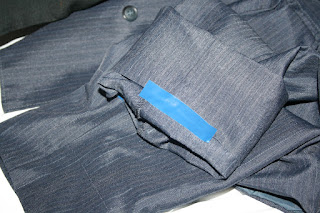 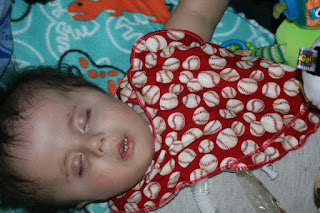 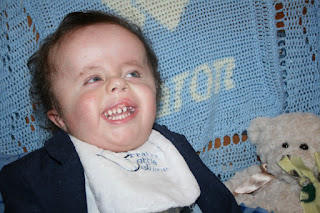 Aaron getting his beauty rest.  He slept most of the afternoon.

Then when it was time to get dressed, he was all smiles!  This kid hasn't been outside the home for several weeks except for a couple of check-up appointments.  He just knew that he was getting out.  And even with how cold it was, he was tickled pink to be going somewhere.  It was almost like he was saying, "hey, it may be cold, but that means I'm not stuck in my room!"

Here he's actually sitting on his own!  It was only for several seconds at a time, but it's a start!  His bear is in the background behind him.  He (the bear) had to give up the shirt so Aaron could wear it. 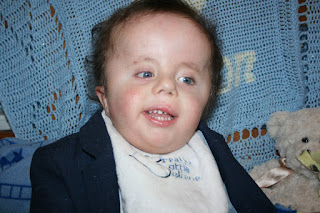 And our pictures?  I think they're going to be great!  The Gublers are a wonderful, fun couple who spent a LOT of time with us.  We got MANY shots of the whole family, individual shots of each of the kids, all the guys together and all the girls together.  Then Andrew really wanted a picture of him and Aaron, so each of us also did a few shots just one on one holding Aaron.  From what I saw in the viewfinder, I can't wait to see the finished product.  I'm so grateful for people who are willing to help us out.  These pictures will be priceless.

Then, if that wasn't enough, on the way home was a riot.  The boys started singing (if you could really call it that).  I mean, they've got some great voices, and they've enjoyed a fabulous choir director at school, but they were trying to be goofy and sing off-key and it was a blast!  Then as we got closer to home, they started settling down and sang songs from when they were in choir.  Fun songs and sentimental songs, in harmony, with rich voices.  I hope I never forget how fun that ride home was.  All in all, it was a night to remember for all the right reasons.


A memory is what is left when something happens
and does not completely unhappen.
~Edward de Bono

Posted by CompatibleWithJoy at 8:35 PM