Yesterday we went to story time at the library.  It was so great to take Aaron and do with him what I did with the olders.  It's a Mom & Me story time, geared towards 18 to 36 months, so we're even in the target range!

We had to modify a couple activities for him.  Instead of getting up and running around the room for red light, green light, I just ran his legs as he sat in my lap.  He thought it was really funny.

We used little sticks to tap together, rub, and swish back and forth. It was really hard for him to keep a hold of the sticks, but before we were done, he was purposefully hitting them together.  He would bring the one in his left hand UP to tap the underside of the one in his right hand, which he really wasn't moving at all.  So funny. 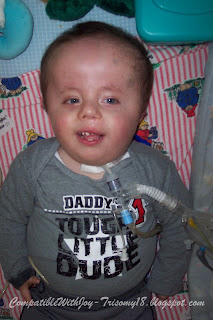 It's not often that I give into impulse buys.  But it's also not often that I find the perfect shirt for him.  I mean, I still struggle a little bit (okay, sometimes a lot) when I see these cute "rookie of the year" or "play ball!" t-shirts for toddlers.  I don't mind seeing them on others.  I just have a hard time putting them on him.  But yesterday, I found the very best shirt.  It says, "Daddy's #1 Tough Little Dude."  And doesn't that say it all?

“Most of the things worth doing in the world had been
declared impossible before they were done.”
― Louis Dembitz Brandeis


Posted by CompatibleWithJoy at 9:44 PM