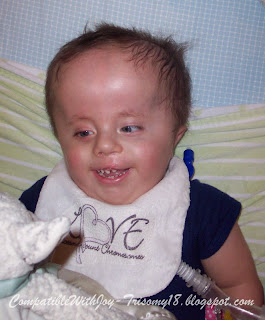 Last night was the big rivalry game here in Utah.  BYU vs University of Utah.  Blue vs Red.  Private religion vs Public state school.  And the school where my husband and I (and now some kids) put in a lot of blood, sweat and tears (and money!) to gain an education, against the school that teaches and trains the doctors and staff who take care of Aaron.  Yeah, I'm starting to be (just a tiny bit) conflicted, but not much.

BUT, here's the good news.  We weren't there!  Not "there" as in, not up in the middle of all that RED that I KNOW permeated the hospital.  Again, I don't have (much) against the red, but it was nice not to be there, for the first time in Aaron's life, on this weekend.  And both other times we weren't supposed to be there, either. 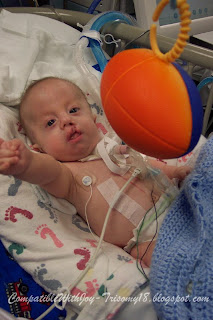 Saturday, November 27, 2010.  We had just been discharged on Monday after almost three weeks where he'd been up there to get his g-tube, then followed by the need for the trach and ventilator.  It was supposed to be pretty good for quite a while.  But, unknown to all, his vent settings weren't enough to sustain him as he became more and more tired.  Early in the morning on Friday, paramedics decided he needed more care and faster care than they could provide.  Lifeflight was called to our home, landed next door in the intersection, and he was on his way.  Needless to say, on game day, there wasn't even the smallest chance that we were going to be anywhere but in the ICU. 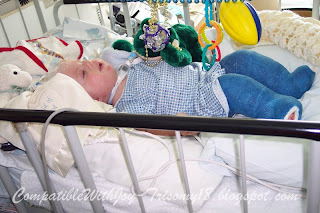 Saturday, September 17th, 2011.  Aaron had gone in the day before for a same-day surgery on his feet to correct his vertical talus.  That's a bone in the foot that's supposed to lie horizontal, but because his achilles tendons were so tight, the bone in each foot had been pulled vertical.  Same day as in "in, out, let's go home."  But I was a little uneasy because his heart rate stayed high after surgery, so they kept us overnight.  I planned an alternate route home so I wouldn't have to fight game day traffic if we didn't get out in the morning.  Turned out that wasn't an issue at all.  He continued to struggle, his tiny toes became not so tiny, and we were there until Tuesday. 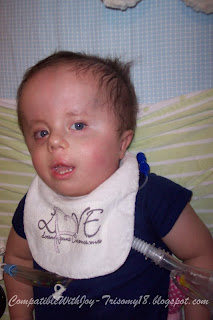 Saturday, September 15th, 2012.  We weren't exactly at home, but we certainly weren't at the hospital.  And while yesterday was full of "growing experiences," they weren't necessarily Aaron's.  Yeah, out of our four soccer teams, three got crushed.  Rough day.  But Aaron thought it was all in fun.  He slept through the first game and then played and cheered at the second.  (I only made it to two of them.)  He also did two one-hour trials off the vent and performed beautifully. 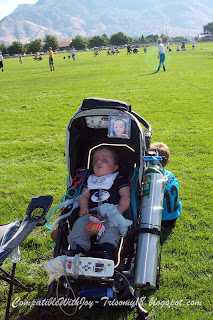 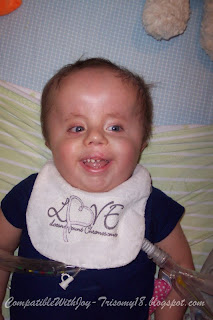 Unfortunately, even though he was all decked out and cheering for the good guys, they failed to pull it off, again.  Red has prevailed over blue every time in Aaron's life.  I didn't stay up to watch, but it appears to have been (almost) a comedy of errors, with BYU unable to finish several scoring opportunities.  Oh, well.  Maybe better luck next time.  And the real goal is to be watching at home again next year.


“Home is the nicest word there is.”
Laura Ingalls Wilder