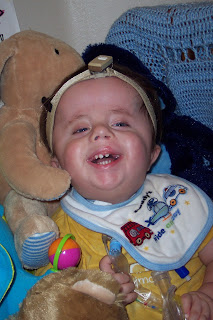 He's also getting new trachs, a flex-end, because he's trying to roll over and his stoma is tearing.  This will make it so that his vent circuit doesn't bull has hard on him and he'll have more space to move his neck.  His RT has already ordered them.  She is amazed because the reason he wasn't originally a candidate for them is that he wasn't supposed to live long enough to roll over! 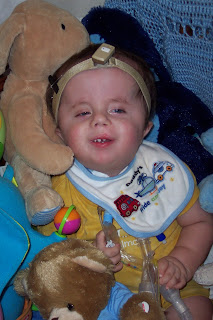 Speaking of rolling over, he can go all the way to his tummy, if his hand is in his mouth, that is.  Otherwise, his arm gets in the way and he only gets halfway there.

He is ALMOST sitting on his own. He can sit fairly well for several minutes as long as he gets a little support to his lower back. He has also started bearing weight on his legs, for a few seconds, when he's held upright. I know for most kids, this isn't a big deal at all. It starts within the first few days of life. But for Aaron and kids like him, it is huge.

This last week and the next few will see us traveling to several doctor's appointments, but they're all the follow-up type.  Last week we had labs (in preparation for next weeks visit), a 2 year old check-up (with a shot, boo), and a visit with his plastic surgeon. 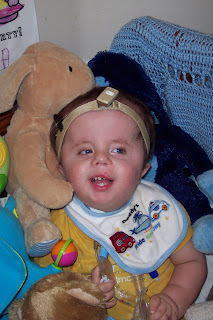 After his labs, we went upstairs to see the doctor that helped so much before he was born.  He was still crying, pretty hard (it took 2 pokes and 15 minutes to get 2 ml of blood).  She was a bit concerned that she shouldn't hold him because he was already upset.  But when she picked him up, he snuggled right into her and just snuffled a little.  Dr. F was thrilled to see him and to see how he is trying to sit on his own.  When she put him back in the stroller, he started crying again.  I think he knows he has a friend and an advocate in her.

Next week we see his orthopedist at Shriners for a follow-up on his feet and his endocrinologist for his thyroid.  After that it's cardiology and audiology.  So we're making the rounds, but they all appear to be good things.

Posted by CompatibleWithJoy at 5:09 PM