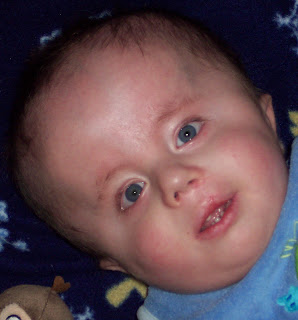 Yesterday was Aaron's 21 month birthday.  He has been with us for 581 days, yeah, I counted.  That's 581 days more than we were told to expect.  And they've been some great times. 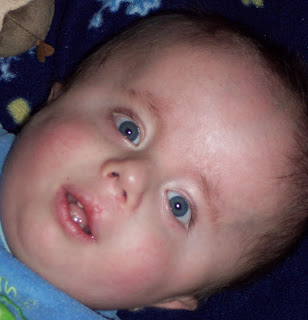 He's been through a lot in his short life.  He's dealt with heart failure, collapsed airway, and an inability to coordinate that, oh so important, suck, swallow, breathe sequence.  He's had three brain MRIs, many EKGs, and countless x-rays, not to mention a single spinal tap. 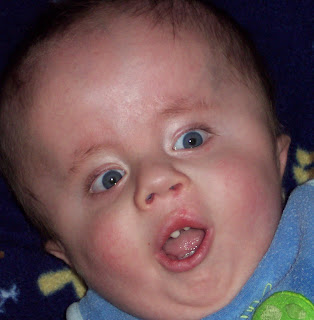 I lost count, long ago, of the IVs and the labs drawn.  He's endured 19 hospitalizations since his discharge from the NICU for a total of 107 days inpatient.  Although, given his demeanor up there, we sometimes wonder if there's someone "special" up there that he wants to go see.  He's had a few pneumonias including two that threatened to take him from us. 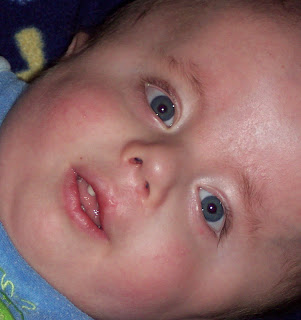 BUT he's also done a lot of fun things.  He's been to soccer and baseball games.  He's been to choir and dance performances.  He's been to family reunions.  He plays with his brothers and loves it when his sisters tickle him.  When he had his casts on his legs and we had to put his pulse/ox probe on his hands, he thought it was a great new toy.  He could chew on it, wave it around, and even pull it off!  How like a baby is that!  This little boy, mostly deaf, loves music and dancing.  He loves it when Andrew and Michael read stories to him.  He loves to have his daddy rock him and pat his back.  He LOVES to get out and go on walks and see people.  He has a grin that just doesn't quit.

And through all of this, he just keeps on teaching us.  See, it's not how easy your life is that makes it worthwhile.  It's how much you enjoy it.  And I challenge you to find anyone who gets more enjoyment out of their life than this little boy.  The few times he cries, it just breaks your heart.  And frankly, we don't have a tried-and-true way to comfort him.  Not because he is hard to comfort, but because he just doesn't cry very often.

He's not too fond of brand-new experiences.  His BAHA hearing aid, a bath, tummy time.  The first time it's hard to deal with.  But after that first experience, he buckles down, gets to work, and finds the JOY in them.  Tummy time is especially difficult, physically, for him.  His muscles are just so weak that he can't pull his head up.  He gets a real workout from it.  But even though it's hard, he keeps trying.  And after that initial time, he does it with a smile.  This kid just doesn't know how to give up.

Over the last couple weeks, we've had more testing and check-ups.  His endocrinologist has ordered some more tests for his thyroid.  Before we start treating for low thyroid, he wants to make sure that it's thyroid related and not something else.


His bladder test came back the same, just as we expected, so he'll continue using antibiotics to prevent infection.  His abdominal ultrasounds showed no masses (cancer) which is what was expected and hoped for.  I really don't even want to think about that.  And the best news, neurosurgery decided that he's just got a big head, kinda like some of his siblings.  The MRI was stable and showed no changes from the last two, so he's been discharged from their service.  Unless he starts showing signs of increasing brain pressure, we don't have to see them again.  They're great people, but YEA!

So Happy Birthday, Aaron.  You go through so much, but you teach us as you do.  Nothing comes easy for you, but you smile and keep on going.  We love you.

This is the day which the Lord hath made; we will rejoice and be glad in it.  Psalms 118:24
Posted by CompatibleWithJoy at 1:39 PM