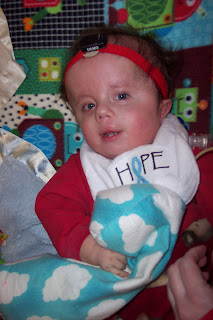 Can you imagine what it would be like to live with your ears underwater?  Or with them constantly plugged?  And then suddenly be thrust into the world of sound?  Well, now you might begin to understand the "fearful" part of hearing.

On Friday, Michael and I took Aaron up to an audiology appointment.  The plan was to spend quite a while up there letting him use a BAHA hearing aid.  This is one that looks like a small box and sits snugly against the skull bones.  We would put it on, test in the sound booth and then walk around the hospital and see how he did.  Except, those of us "in charge" have never had the experience I described above.  Yeah, kinda scary.  Really scary.  And he kept scaring himself.  When he would tighten up and cry, he would set off his vent alarm, which scared him more, which caused more alarms.  See a problem here?

We finally got him to calm down, but I don't think it was because he was really okay with things.  I think it got to be too much so he just shut down.  Kinda like a newborn in a noisy environment will just go to sleep.  He didn't sleep, but he shut down.  We tried to go into the sound booth to test things, but he just wasn't responding much at all.

Our wonderful audiologist asked for and GOT permission to let us borrow the BAHA for the weekend.  (Yea for three-day weekends!)  We have to return it Tuesday morning.  Well, the rest of Friday was also pretty sad.  He was just having a hard time adjusting to all the noise.  And we did try to keep things fairly quiet, and we took it off when he was sleeping and when the kids first got home from school.  But still, it was kind of rough.

Saturday, though, was much better.  He was back to his normal, calm self.  I even wondered if he was still  hearing because he was acting so much like he usually does.  It's hard to tell sometimes if he's reacting to sound or to movement when you walk in and call his name.  But last night, last night something so small but wonderful happened. 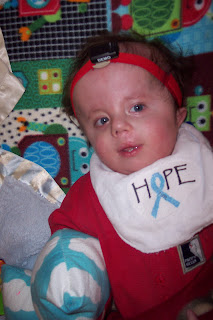 When I do his cares, take care of his trach and g-tube, I usually put the supplies in the bed above his head.    (That way I don't lose them.  Yeah, I've done that once or twice, okay, several times.)  I was cutting his medical tape with scissors right above his head.  I do it all the time.  But this time, that little whisper of scissors on tape and paper, it caught his attention.  He stopped what he was doing and started moving and trying to look for the sound.  He heard it.  My baby heard it.  And that is wonderful.


I will praise thee; for I am fearfully and wonderfully made: marvellous are thy works; and that my soul knoweth right well.     Psalms 139:14
Posted by CompatibleWithJoy at 9:14 AM