That corner that has been so elusive?  Yep, we've gone around it!


Today has been a very good, good day.  Aaron’s on 45% oxygen.  Today’s just a resting day.  We’re continuing the therapies he’s been getting, but not changing or pushing anything.  He’s doing SO well.  His labs from yesterday are still negative for bacteria and other less common viruses.  It really looks like it was all the swelling in his lungs that made it so hard to process his oxygen.  The albuterol is working wonders to reduce that.  They’re stopping short of calling it asthma, but say that he does have “reactive airways,” which is essentially the same.  We’re hoping since we haven’t seen this before, that it is just because this virus has irritated his lungs so much.


It will still be a few days before we make it home.  They need to finish growing out his cultures, make sure he’s stable here, then switch to our home vent and make sure we’re stable on that one.  But we’re heading the right direction, and at a much faster speed! 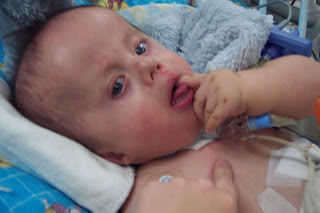 But anyway, it’s a good one!  He’s happy and playful, and popping himself off his ventilator quite often.  Little monkey, you need that for breathing!


Today’s gratitude thought is easy:  I’m grateful Aaron is doing so much better.
Posted by CompatibleWithJoy at 5:13 PM