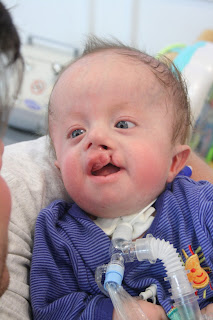 Aaron is 11 months old today.  It is so wonderful to have him a part of our lives.  He is also doing much better than he was at the beginning of the week.  On Mother's Day, I thought he was outgrowing the size of his trach, and I suppose he may be.  But he definitely had outgrown his sildenafil dosage, again.  The kid just keeps growing!  (That's a good thing.)  Anyway, cardiology called on Monday and increased his dosage by a little.  We also increased his feedings again as well.  The poor baby had to deal with increased meds (which increases his heart rate a bit), increased feeds (more pressure in the tummy), and his super antibiotics all at the same time.  Tuesday and Wednesday were a bit sad for him.

BUT, come Thursday, his tummy had stretched and his meds had kicked in and lowered his lung pressures.  Lo and behold, we're back down low on his oxygen usage and high on the smiles!  He's still taking his antibiotics, but those will be done tomorrow.  The weather is also gorgeous so I'm going to try to take him to the boys soccer games.  It's looking like a great weekend! 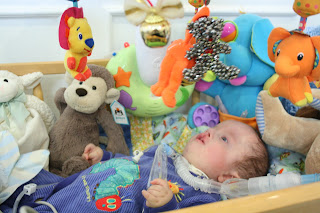 On Wednesday, as part of his therapy, I put him on the floor on a blanket.  In the past, this has been a pretty short experience as his oxygen and heart rate haven't always liked it.  This time, his vitals were good and he was really happy.  He spent several hours on the blanket, took and nap and even had a feeding there.  So I decided to lower his bed (it's been raised quite a bit at the head) so he could enjoy that all the time.  I don't know what's different about flat on the floor vs flat on the bed, but there is one.  Apparently he wants a little bit of raise on the bed.  But it's still down a lot and we've moved toys and the mobile around.  Now his mobile is on the side and he can hit it with his hand.  His nurse, Kristina, noticed that at night he does it a lot.  We're not sure if it's on purpose yet, but he's always excited to see and hear the music when it turns on.  I think it's just a matter of time before he puts the cause/effect relationship together. 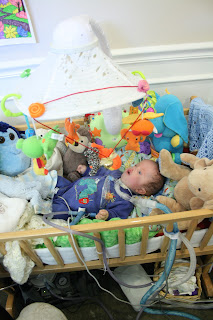 I've been thinking lately (I know, dangerous).  I have an online friend whose son was initially diagnosed as full T18.  He is doing incredibly well, and hitting milestones that we're not supposed to see.  Although I'm learning quickly that we need to not say a child can't do something.  Aaron will probably never go to medical school, but that doesn't mean he'll never be able to do anything.  Anyway, recently the doctors did a skin biopsy on him and discovered that he has a mosaic form of T18, meaning it's not in all his cells, just some of them.  This is where I got to thinking.

Aaron has full Trisomy 18.  Every single cell in his body has a third copy of the 18th chromosome.  It just does.  There's nothing that can be done about it.  But we don't treat his chromosome.  We treat the challenges that it causes.  He has a g-tube and nissen because that third chromosome causes very low muscle tone and disorganized swallowing.  He has a trach and ventilator because that same chromosome causes the cartilage in his airways to be much too soft to hold open his trachea and bronchial tubes.  We do physical therapy with him to strengthen those same muscles.  So we treat the challenges, not the syndrome. 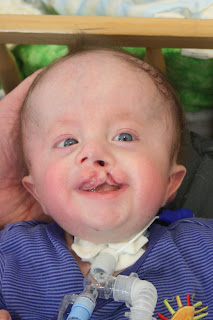 But, that same third chromosome has some great advantages, too.  It allows a perfect spirit to shine through.  It has allowed us to experience the newborn phase for almost a year now.  I LOVE newborns.  It's been so great.  It has drawn us closer as a family.  It has strengthened my testimony of Jesus Christ and His atonement.  It has allowed me to make so many new friends, friends whose strength I rely on, friends I hope I help, and friends whose heartaches and joys I share.  I've broadened my horizons.  I've learned to write more.  I've also learned to ask for help.  I pray more, a lot more, and not just for my family and close-by neighbors. 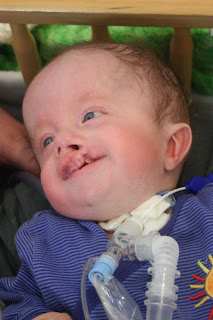 Aaron's extra chromosome has created a new normal for our family.  It is not easy.  It is hard.  But I keep hearing the speaker from our back-to-school fireside last fall:  "I can do hard things."  Everything worthwhile come with pain and hard work.  This is no different.  I can do hard things.  They bring such wonderful blessings.
Posted by CompatibleWithJoy at 12:04 PM