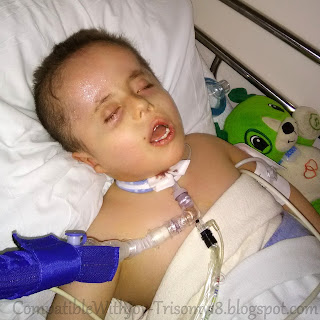 We did it, we made it home.

It was a bit questionable there for a little while.

In the past, Aaron has come out of surgery and just woke up.  Oh, he opens his eyes, looks around, and decides that his naptime isn't quite over.  But mostly, we can coax him out of it. 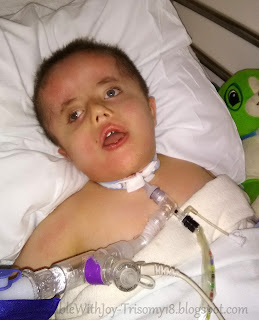 Yesterday, he wasn't playing.  He just kept on snoozing, and at a fairly high rate of oxygen.  When he eventually did (sorta) wake up, he still wanted a lot of oxygen, much more than I was capable of transporting him on.  So we waited, and we talked, and threw around options.

Finally, almost four hours after he came out, I gave up and said we needed to start talking to the team on the floor about admission and called William to let him know we wouldn't make it home.  He must have heard me and rethought his game plan, and he started doing a little better.   Not much, but enough to have us guessing again.

We did finally get him down to where I could bring him home, and I gave him 15 minutes and ran for it.  He did bounce a bit up and down, and I used the whole tank getting him home, but we did it!  We slept in our own beds for what was left of the night.  (Got here just before 1 a.m) 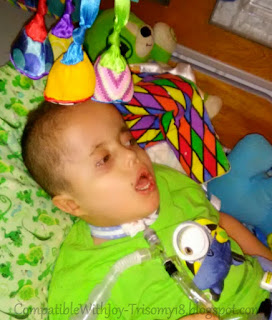 This morning he's still a bit wonky.  I'm trying to decide if the goop I'm pulling out of his nose is surgery related as he heals, or the nasties his brothers have had.  I'm leaning towards the surgery.  When he had his adenoids out, we suctioned and suction for about a week as his body tried to heal.

So we'll hunker down, be grateful it's Spring Break so we don't have to go anywhere, and just relax.  At least relax in between all his treatments, cares and meds.  But that's okay.  We're home.


Nothing reduces the odds against you like ignoring them. ~Robert Brault
Posted by CompatibleWithJoy at 11:40 AM