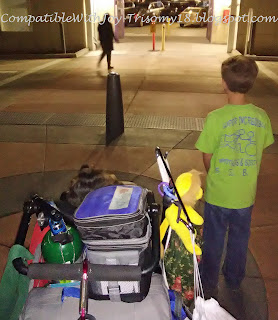 I know, I know, it's been far too long since I updated anything.  In my defense, I'm still not 100% from being sick and I've been working full time.  Plus, while it's been busy around here, it's the normal, ever day, run of the mill stuff, mostly.

I did also manage to get up an Instagram/Facebook post for every day in March.  Sometime soon (I hope) I'll reproduce those on here.  We'll see.

Anyway, a little background and what's going on now.  We have two newer nurses on board (who I love!) and they're working out well.  But one of the things that they have to pass off with me is a trach change.  They have to know, and I have to know, that they can and will do it if necessary.  Until they're left alone with him, it's not that critical, and I've been putting it off.  Like I said above, we've been busy, I've been tired, and also in the back of my mind was something about it not being a great idea.

In fact, this week I planned a couple different times to have one or the other do it, and then backed off.  I just felt uneasy.

But yesterday afternoon, he was struggling again with his oxygen.  I'd done everything else, so I figured I'd change out the trach.  It'd been a while since his last change and it certainly couldn't hurt.  Except it could, and it did. 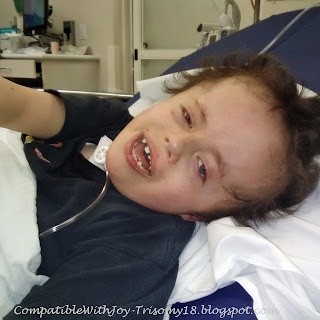 When I pulled the old trach out, there was quite a bit of scar tissue that also came up to the surface of his stoma (the hole).  I knew immediately it was going to be hard to get the new one in, but I tried.  And I tried.  And it didn't work.  I grabbed his back-up trach.  It doesn't have a balloon and it's made from a stiffer material.  It should have slid in easy.  Yeah, should.  I did manage to get it in, but not without some significant trauma.

A couple years ago we had another issue with a trach change and I took him down to our local hospital where they helped me get it back in.  I knew from what I saw that this time it wouldn't be as easy.  So on up to Primary's we went last night.

As a side note, I was all excited about a weekend with nothing on the schedule other than General Conference.  After working full time and all the kids' activities, I figured I wasn't even going to get dressed, let alone leave the house.  Aaron apparently had other ideas.

Anyway, when we got up there, the Emergency Room Respiratory Therapist (RT) was one that knew us well.  I think they all do, another advantage of going up to PCH.  He called in another to help and they tried to get his original trach back in.  He pushed, HARD.  It wasn't going.  So they called in the ENT resident.  He came, looked at it and spoke to me, left and called his attending, and then came back with his chief resident.

Can I tell you this was a little unnerving?  I mean, it's his AIRWAY.   If something goes wrong with the ears, the stomach, whatever, well, you've got a little, or sometimes even a lot, of time.  But the airway?  Nope, you get it quick or you never get it.  There really aren't second chances if you're not prepared.

So with that in mind, they looked down his airway, just like we did a month ago.  (It looked great then, still pretty good yesterday.) Then they got ready.  We had his regular trach, a slightly smaller but still cuffed trach, the uncuffed one we'd put in twice now, and then some ET (endotracheal) tubes of various sizes.  Those are the ones they use on the rest of us for surgeries, etc.

If we got to that one, we wouldn't be going home.  Actually, it was open for discussion if we got anything except his regular one whether or not we could go home.  But with an ET tube, he would have been sedated and admitted to the PICU.  I mean, this kid wears onesies all the time because that's the only way we keep him from pulling out his g-tube.  No way he'd leave an ET tube in place.

Yeah, there were definitely some rocks in the stomach.

But with a lot of effort (again) we did manage to get the regular trach in.  We're pretty sure that putting in the other one twice managed to knock loose some of that tissue that was blocking his stoma.  But now I get to make a call up to our regular ENT tomorrow and get him on the surgery schedule.  And we're watching that trach like a hawk.

I've also pulled out more trachs, smaller ones, and I've found the masks for his ambu bags.  Without a trach, if we have to bag him, it's going to be hard.  We'll have to go over his nose and mouth like anyone else, while also plugging his stoma.  And he won't be left with anyone until we've got a better plan in place.  If that trach comes out or gets plugged it's potentially fatal, and that's not something I'm willing to entrust to anyone else.


"Life is either a daring adventure or nothing at all."
Helen Keller

Posted by CompatibleWithJoy at 5:55 PM