Who'd have thunk it?

Who'd have thunk a little ear could cause so much grief?  Well, I guess anyone with an ear infection might. 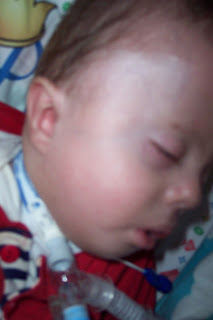 There were a few days last week where Aaron had some something, in hindsight it was probably wax mixed with blood, in his right ear.  But there was only a little, and while it looked suspiciously like dried blood, I reasoned that there was no way an ear infection could survive the antibiotics he had going at the time.

Then the last couple of days have had some interesting times.  At least interesting from a detached medical standpoint.  Not so interesting from a mom's point of view.  He's had a few, but only a few, big desats.  Big, meaning 70s and sometimes high 60s.  We'd turn up oxygen, try to suction and not get much.  Do a breathing treatment, sometimes his lungs sounded tight.  And slowly, he'd come back up.

Yesterday, we did two breathing treatments, only eight hours apart.  Again, I went to bed worrying, wondering, hoping and praying.  And thankfully, I slept through the night.  And even into the morning until I was woke by knocking.  But it was Michael wanting breakfast, not the nurse.

I thought I'd give Aaron a bath this morning.  You know, in the sink, with water, all that stuff.  It's been a LOOOOONG time since he's done that.  Between having plaster casts and being sick and what-all, he's only had sponge baths for the last several months.  As I got him ready, I caught sight of his right ear.  Yuck!  Full of blood, dried blood.  Somehow, it seems an infection did decide to survive the antibiotics.

But, with the apparent rupture, there's been a release of pressure, pressure we didn't even know was there.  He's now resting peacefully and starting, yes, another antibiotic. Thankfully, this one is a topical one we put in his ear.  So it shouldn't have those wonderful side effects he put up with before.

And Monday, when we see audiology, we'll be asking about this, too...
Posted by CompatibleWithJoy at 12:59 PM