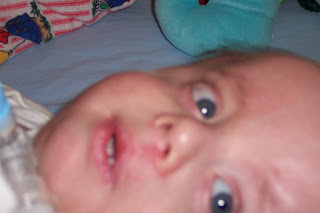 I've had some questions about my reference to a strange x-ray on Sunday morning.  It had suggested a possible pnuemothorax, where there is a pocket of air OUTSIDE the lung instead of inside.  It looked small, and the radiologist said he really wasn’t sure, so the plan was to decrease a little bit of air in his cuff to make his leak a little bigger and repeat the x-ray this afternoon.  That afternoon’s x-ray?  Yeah, no pneumothorax, but increased atelectasis (collapsed lung tissue).  Crazy baby.  He’s always got to have something going.


Anyway, Sunday his heart rate was also been elevated.  It’s probably in response to his albuterol treatments.  So now, I get to figure out if he’s wheezing and only give treatment when it’s needed.  That could be interesting.  Lungs need it if reactive, but heart becomes tachycardic.  So which way to go…


Sunday evening as I left for shift change, Aaron really wasn't looking too great.  He was uncomfortable, needing more oxygen, running a little higher on his temp, but not a true fever.  (Parents have to leave the PICU during shift change from 7-8 am and pm.)  When I came back, he had just filled his pants, really well.  And guess what?  He started looking a whole lot better.


We had a quiet night on Sunday night and prepared to come home on Monday.  We had to switch from IV antibiotics to oral and get all his medications together.  Also needed to let his home health team know we were on our way.  Then it was out the door! 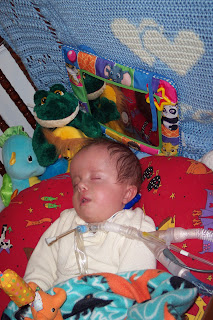 We got home and he was thrilled to be back in his own bed.  He played with his mobile a little bit, and then just fell fast asleep.


But it didn't last.  He had a rough night last night, going much higher, again, on his oxygen.  We had two nurses because one is orienting.  They got me up about 4:00 this morning (but I slept until then!) and we gave him his albuterol.  Then when I got up at 5:30, we gave him another breathing treatment.  At one point, I had him on 9 liters of oxygen and struggled to maintain 90% sat rate.  Let me tell you, it was not fun.  Was just on the verge of calling 911, yes, again, but I was still pulling junk out of him.  It helped some.  Plus he was cold.  His temp was down at the bottom of his normal range.  So I put a warm pack on him to help him warm up a bit.  He's doing much better now.  He's dropped to 3 1/2 liters and is resting quietly.  It seems that whatever was bugging him so much during the night is gone, at least for now. 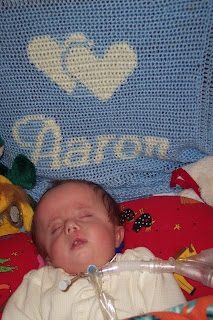 I'm just really, REALLY hoping to not go anywhere.  And by that, I mean ANYWHERE.  Besides driving my carpool, I don't even want to leave the house for several days.  But mostly, I don't want to end up back up at the hospital.  Please pray that we can kick this and stay home.  Because the biggest reason I don't want to go back?  I'm not sure there's much more that they really can do to help him past this right now.  We spent the better part of the past 2 1/2 weeks in a fight for his life.  I know that so many more fight much longer, and yes, on a day-to-day basis.  But I'm tired.  And I need to regroup before we do this one again.  Besides, I miss my bed.


Yesterday, I was grateful to be home. 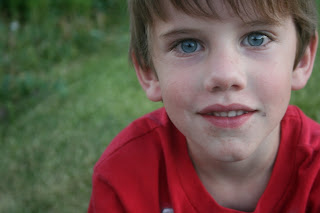 Today, I'm grateful for my Michael.  He's so sweet.  He came running up and gave me a big hug last night.  Then he fell asleep in my lap.  Wonderful feeling.
Posted by CompatibleWithJoy at 10:46 AM