Prayers please, and a song

When I was still expecting Aaron, a friend told me about this
version of "I am a Child of God."  It's sung from the perspective
of a child who has returned home ahead of their parents.  Over the
last year and a half, several dear friends have had to let go of
their babies.  I finally got Joseph, then 10 years old, and Mary, 19,
to record this.  I wanted a child's voice, and Mary provided the
encouragement Joseph needed to sing this.  Recently, more babies
have gone home.  I hope that in some way, this can help a little
in the healing process, or provide some comfort.  I am so grateful
to know that not only are my children His children, but so am I. 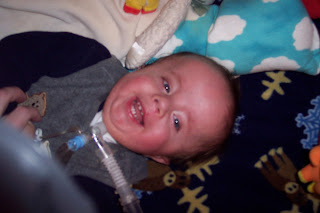 This week promises to be a whirlwind ride.  I looked at the calendar yesterday and realized that Aaron hadn't been out of the house since we came home from the PICU three weeks ago.  This week, yeah, we're going to make up for it.

Today, Michael & I took Aaron up to get new hearing aid molds made.  The kid has grown since the end of July.  Who'd have thought?  As I put him in his carseat, I realized how much he's grown.  The little baby that we had to use all sorts of blankets and things to make the carseat small enough, is busting out of it.  Again this morning, I had to loosen the straps in order just to get him in! 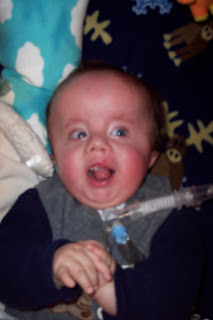 Tomorrow, he goes for his 18-month check-up and his first Synagis shot.  This little wonder drug does much to prevent RSV in preemies and medically fragile children.  I don't even want to think about what would happen if he caught it.  Twice I've had otherwise healthy infants catch it, and I don't ever want to relive that experience.  I will never forget the night with the first, or the day with the second.  Aaron will get one shot every four weeks for the next five months.
This is where we're asking for prayers.  ﻿Only one time last year, when he was already being treated with antibiotics for an infection, did he not end up being rushed to the hospital somewhere between 24 and 48 hours after his shot.  Each time, the bacteria trying to colonize his trach would end up unbalanced and he'd get a trach infection.  Now, I'll take a 48-72 hour hospital stay over RSV any day of the week.  But we're really, REALLY hoping that it won't repeat.  The thought is that since his trach is now established, and he's bigger and stronger, that it won't be an issue.  But if you can spare some time to pray for little Aaron, maybe a little more than usual, we would really appreciate it.

But the week doesn't end tomorrow. Before his appointment, Aaron will have a developmental therapy appointment here.  Then he gets Wednesday off, (I think), and we're on the run again on Thursday.  Because he blew out his right eardrum on Saturday, the ENT wants to see him early Thursday morning, and then right after that, he has his second MRI.  He'll have to go under general anesthesia for it because of his need for the ventilator. 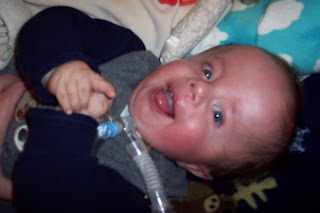 The MRI is in preparation for a consultation with neurosurgery next Tuesday morning.  We're really hoping that the bleeding in the brain, his subdural hematoma, has subsided and there are no new findings.
Oh, and he's also looking like he's catching another cold.  'Cause he just doesn't have enough going on right now.

So, those are our prayer requests this week:  that he'll stay healthy and be able to avoid a hospital stay, and that the MRI will have better results than the last one.  And if I can come out of this week with a tiny bit of sanity intact, that would be an added bonus.

Posted by CompatibleWithJoy at 8:26 PM