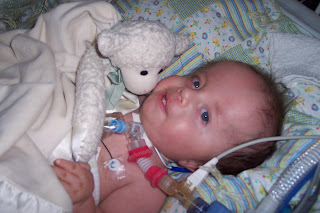 Well, the little guy earned himself a bronchoscopy today.   He's still really happy, but last night he slid backwards a little instead of continuing forwards.  To do this, they give him propofal (yes, think Michael Jackson, but administered correctly by a team watching carefully) to keep him comfortable.  Then they take a tiny suction catheter with a camera on it.  They went down and washed out his lungs.  They pulled secretions and he also had a little bit of blood down there.  Dr. D, his pulmonologist, said that it looked to him like it was irritation-caused and the secretions were viral.  They sent them down to the lab, and so far, it looks like he was right.


They also gave him an albuterol treatment because his lungs were quite “reactive” or sensitive.  Good news is, his malasia, or floppy airway, is MUCH better than it was last November.  That’s why and when he got his trach.  His ENT doc said at the time, “I don’t know how he’s alive.  I’ve never seen an airway so collapsed on someone who was still alive.”  He certainly still needs the trach and vent, but he's much less fragile than one year ago.  Apparently, all airways collapse a tiny bit when we cough.  It’s just what happens.  And when he was being bronched, he coughed quite a bit so they were able to see well how things were going.


Since his labs are coming back negative, and he responded to the albuterol, they’re also starting him on steroids to help combat the inflammation they saw down in his lungs.  The hope is that if the inflammation goes down, the oxygen will get down to the alveoli better and he will process better.  Then we might even be able to make some progress towards home!  Wouldn’t that be great?? 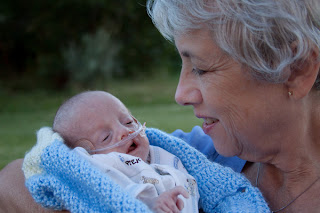 In keeping with finding things to be grateful for, I want to share my mom.  It’s her birthday today.  I have so many things to be grateful for, but today I want to focus on her.  My mom is awesome.  I was a pretty bratty kid, especially as a teen, but she was always there for me. Since I’ve grown up, I can’t believe how incredibly brilliant she’d become. I’m glad she’s part of my life. I learn so much from her.  I’ve had a lot of people tell me what a great mom I am, especially over the past year and a half.  But I learned it all from her.  I just try to do what she did.  I love you, Mom, happy birthday.
Posted by CompatibleWithJoy at 9:27 PM