I'm quickly coming to the conclusion that Aaron is going to have to have a breathing treatment daily.  He's supposed to use albuterol on an "as needed" basis, but that need has been almost exactly 24 hours apart for the last several days.  He can actually have it up to four times a day, so I guess we're doing okay.  He uses an inhaler and we just put it in-line in his vent circuit. 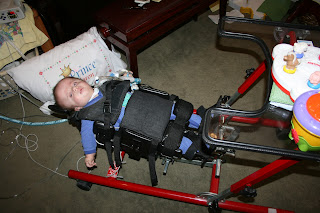 Aaron's physical therapist came yesterday and brought this really neat device.  It's called a stander.  (And I'd be willing to bet that on the kindergarten homework, Michael is the only one with a "stander" listed under the objects a magnet will stick to!)


We lay it down and put Aaron in it.  It has straps over his chest, tummy, knees, and some for his feet, too, except they're too small for the straps to reach. 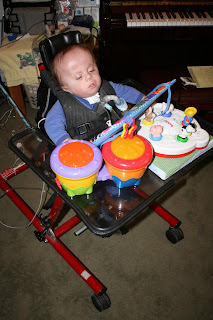 Then there's a foot lever in the back that let's you raise it up to, you guessed it, a standing position!  The world's a bit different from this point of view.  He can play with his toys and look at his mirror here. 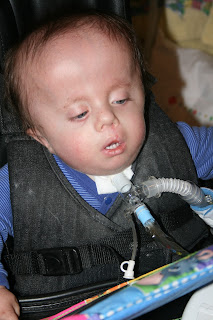 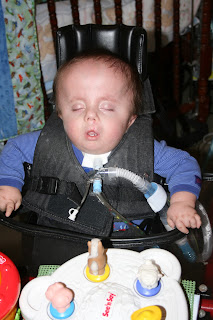 Okay, so it must be comfy.  He played all night and I guess still wasn't really ready to work even though it was after 1 p.m.  Since I didn't get him out, he decided to just go to sleep standing up.  I thought only horses could do that.

Thursday, November 17:  I'm grateful for my 6th grader's teacher, Mrs. V.  She told the kids they got 200 extra credit points in math if they adjusted a recipe (doubled, halved, etc) and made it for their family.  So tomorrow, we get to wake up to crock-pot french toast, made by Joseph.  YUMMY!


Friday, November 18:  I'm grateful for my three oldest sons.  The last almost two years have been difficult for them.  We've tried to keep things as normal as possible, and keep them in the activities that they love.  We've been pretty successful, but I have to say that's because these three have really stepped up to the plate.  They have been great to keep reminding me of what is going on and have been quite resourceful in making things happen.  I love how responsible and caring they are.  Love you, David, Jonathan, and Matthew!
Posted by CompatibleWithJoy at 2:07 PM