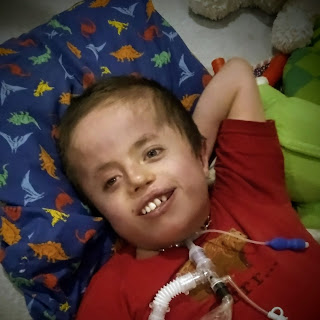 It's been a long time.  Two months.  How did I go two months without writing?

Actually, I think I know how I did it.  I have been writing, a lot!!  But it's been for classes and not on here.  As a side note I mentioned that on the 16th, I was done with what I needed to do for one class until after Thanksgiving.  Michael said he wished he had a class like that.  I then informed him I'd written four papers in 36 hours for that class, and he retorted that he didn't want a class like that.

But anyway, here I am.

It took four weeks to get Aaron's new trachs in.  Fortunately, the special needs world looks out for its own.  A mom got in touch with me and asked what size and length we were looking for and sent me one within a few days.  Can I say, I did NOT expect what came next.

Aaron has not been doing great.  He's been declining.  It's slow, but it's real.  We keep hearing "disease progression."  We kept seeing disease progression.  Higher oxygen needs, lower saturations.  And then, with the new trach, things changed.  We started seeing higher sats, lower oxygen.  The opposite of what's been happening for months and even years!  His digestive system was working better.  He was happier, more alert!  Could it be that what he needed was a longer trach for oxygenation?  Kinda looks that way!

The last several days have been a bit harder.  I think he's fighting off something, but he's still doing pretty well.  We're still below 8 liters, instead of pushing 10 plus.  His sats are generally in the low to mid 80's instead of high 70's.  I said he hadn't been doing as well, right?  We're now tolerating oxygen saturations down to 77.  Yeah, 77%.  Kinda rough to wrap your mind around, so I generally don't. 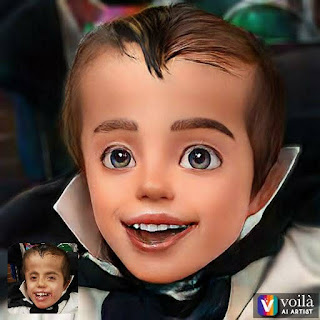 In the meantime, we've had Halloween, cutest Dracula ever, and he got a new wheelchair.  This is kinda awesome, and intimidating, too.  I mean, I learned to drive way too many years ago to put it down here, but it was like learning all over again.  This chair is a power chair, and also has the ability to raise and lower so he can be up at eye level, instead of everyone looking down at him.   It also turns in place, which is a bit hard to get used to.  He has his own controller, but so far, he doesn't get a whole lot of access to it.  He can do it outside, or at school in the gym or hallway, but you know, in the interest of not putting holes in walls and running over people, we kinda control it the rest of the time.

He also got his first Covid vaccine.  I cannot say how grateful I am for this!!  He gets his second one this next Friday.  It is such a blessing to be able to help protect him this way.  He still won't be going out much until at least spring.  The viral season is already exploding.  The last count I heard from Primary's was between 245 and 249 patients.  It's only a 260 bed hospital and that includes units like NICU, the ER, and behavioral health.  It's busting at the seams.  Right now, it's sorta okay because they can do something called load leveling, where they send patients to other hospitals as well.  Kids that are older or less complex that don't need quite the level of specialized pediatric care.  But guess what happens if the other hospitals get too full? 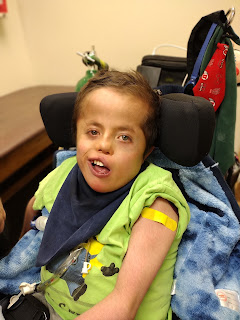 Anyone remember a few weeks ago when Idaho enacted crisis care standards?  Know what that means?  For us, that means Aaron does not get admitted.  He gets turned away.  Kinda see why I'm so vigilant about masking and vaccines and such?  'Cause you know what, you just don't know exactly how it's going to affect you.  You don't know if it's going to land you in one of those oh so sought after hospital beds.  And you don't know what it's like watching someone turn those nasty colors as they fight to breathe.  I do.  It's ugly.  And that's why I'm so insistent that everyone around Aaron take precautions.  And why he doesn't go to church, and we're very careful who we see in close quarters.  It's just not worth the risk.

But anyway, off the soap box.

I've been pretty blah lately.  I've struggled just to feel.  Sometimes that protects me, and sometimes it just hurts.  We lost two more trisomy kiddos last week.  Older kids, one that I know personally, in real life.  It's a gut punch.

But I thought, once I get Christmas things out, that'll do it.  Nope.  When I get Andrew's package put together?  Not really (but I am excited about his reactions).  I've tried to be easy on myself.  We didn't do quite as much with the decorations this year.  But still...

And then tonight I got my old Christmas songbook out.

Yeah, that's what I've been missing.  For the second year, we haven't had our community choir that I always sing in.  For me, Christmas music began with rehearsals in October.  We sang on Sunday nights and the songs would play in my mind all week.  It came to a climax the second Sunday in December, and that's when Christmas really started. 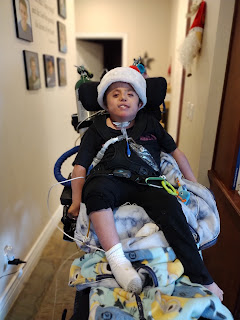 But as I sat at the piano, I started feeling again.  And it was poignant, and soul-filling.  I went through the songs I grew up playing:  "Chestnuts Roasting on an Open Fire," "Silver and Gold," "I'll be Home for Christmas," and so on.  Playing them, singing some, hitting sour notes because it's been waaaaaay too long.  And then I came to "The Little Drummer Boy."

I don't know, that's always been a favorite of mine.  Sad little boy with nothing to offer, home gone, just his drum surrounded by all sorts of magnificent gifts.  But he plays it, plays his best for the Christ child.  And the Baby smiles at him.  What he has to offer is enough.

In class, we're often reminded of the importance of self-care.  I think I've been neglecting that aspect of mine for too long.  I need my piano, my music, the grounding.  I'm glad I found it again tonight.  I'm glad I found myself again.  I am enough.

Posted by CompatibleWithJoy at 9:50 PM