Life and Death, Death and Life

Years ago, when Aaron was tiny, a doctor told me that if he lived, I would get to the point where I was planning for life instead of waiting for death.  I didn't know what that would look like, but it crept up on me and moved in.  I realized when I was waiting with Michael to catch the kindergarten bus and thinking about Aaron's school bus experience, that I had made that change.

But still, death lurks, sometimes hidden more than others, but always there, waiting, in the dark recesses of my mind.

I haven't written lately not because there hasn't been anything to say, but because there's been so much, and much of it is hard to process.

I've been to more funerals for children than adults in my life, and that's saying something.

But child or adult, each one leaves a hole, a giant hole in the lives of their loved ones, and a smaller but still significant hole in my own life.

A neighbor lost their one-year old son a few weeks ago, and two weeks ago yesterday, one of my posse lost her daughter.  A dear friend and neighbor is coming to the end of her fight with cancer, and it's hard to wrap my head around it all.

Six years ago we spent the summer in and out of the hospital, which was better than some who spent their whole summer there.  But four of us really bonded.  A nurse dubbed us the "Posse", and we kinda were.  We watched out for each other, and our children, sitting with them when one of us left the hospital, meeting up for meals, hanging out and chatting.

Almost two years later, we were in the ER with seizures and being put on medications which scared me to death.  This same mom was also there, and walked me through what life is like with seizures and meds and everything.  The doctors diagnosed, she made life doable.

And in addition to the heartache for her and the others around, survivors guilt and anticipatory grief are real, too.

But at the same time, Aaron is here, and he's alive and well, at least the way we define "well."  (Side note, I wanted to enroll him in a Covid study.  He obviously met the first criteria, between 6 months and 12 years, but the second question asked if he was in good health.  I thought about putting yes, because it's good health for him, but figured they'd laugh me out of the building if we showed up.  Oh, well...) 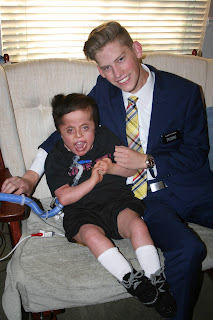 So we're moving forward, planning for life.  He said "see you in two (years)" to his older brother a few weeks ago.  We're getting ready for the new school year.

This fall I'm starting a full-time master's program as well as working full time.  We've discovered that Aaron does much better on a blended diet than formula, but out of necessity, he still uses formula five days a week.  Blending twice a week isn't bad, but given that I'm not sure how to juggle things I've got now, anything I can eliminate is critical.  Enter my sister...

From time to time, I've made food for Aaron ahead of time, but then it needs to be stored in the freezer, and there truly is only so much space there.  I was visiting with Mara and she mentioned that her neighbor freeze dries her husband's smoothies.  Aaron's meals are a lot like a smoothie!  And Mara owns a freeze drier.  (Can I say, freeze dried watermelon tastes like cotton candy!)

So I'm in the process of putting together enough food for Aaron for twice a week for the school year, and she is freeze drying it for me. It's a lot of work, for both of us.  But in the end, I'll have enough to get him through the year in a shelf-stable, no refrigeration needed, still completely nutritious state!  Totally. Worth. It!!!

'Cause we're planning for life.  Although, there is that little voice in the back of my head that says, "what if he doesn't end up needing it all?"  I mean, we are in a pandemic, and the turkey has also decided his latest trick is to undo his  trach ties.  I mean, what could go wrong?

But I'm telling that little voice to shut up.  I'm not listening.  I will move forward.  A month ago there was a beam signing for one of the big support beams for the new hospital.  It opens in 2024.  And I'm planning on him being seen there.  It's going to be his hospital, 20 minutes from home.  And to do that, he has to stick around.

I'm planning on it.

“It does not do to leave a live dragon out of your calculations,
if you live near him.”
― J.R.R. Tolkien
Posted by CompatibleWithJoy at 1:14 PM