Another First, and a Challenging Time Part 1 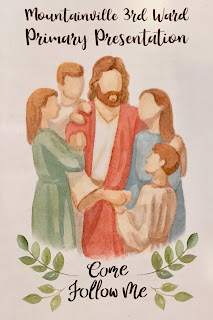 Yesterday was the annual children's program at church, the Primary Program.  It's presented by children ages 3-11.  They sing and say lines regarding what they've learned.

And Aaron has never participated.

Oh, they've asked him to, but it seemed to be a bit pretentious.  We had no way of really knowing, or even guessing, what he'd like to say.  But this year was different.

This year he has his Tobii.

This year he can tell us his thoughts, feelings, and goofy jokes.  (I was a little worried that the last might slip in.)

So two weeks ago, I spent the day creating boards with church vocabulary and symbols, and then he and I worked to figure out what he wanted to say.  He kept coming back to Heavenly Father and Jesus and his family.  (And lots of times he would name family members over and over, but there's a lot of us, so we just did "family."  He couldn't hog the whole time. 😁 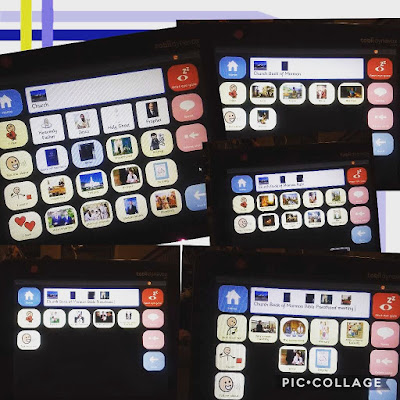 In an effort to have some control over what he was saying (you know, that joke telling thing), I created one board just for his part in the program and tried to make it as foolproof as possible.

And I was kinda nervous.  Would it work?  Would it touch people, or would they think it was an attention getting thing?  Would it take away from the focus, which is on our Savior?

Yesterday came with a whole host of emotions, but overwhelmed wasn't the one I was ready for.

Opening hymn:  "I am a Child of God."  Oh boy, and I was leading the congregation.  That one is a special one for us (and many others).  It's the song I've sung as lullabies to my kids.  The one I've used in so many emergency rooms as we've waited for stitches, broken bones, etc.  The tender prayer as I've held them before or after a surgery.  And the one thing I simply could not get through when Aaron was tiny and I was still waiting for him to die.

It's also the basis for my testimony.  I am His child.  He sent me here to earth to learn and grow, and I need help to do so.  I have many needs, He loves me, He wants me to return to Him and receive all He has to give.

Yeah, not able to sing that one, so I mouthed it instead of singing and hoped I wouldn't completely break down.  I didn't.  Much. 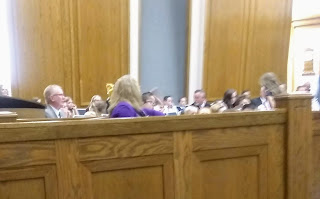 The sacrament hymn was "Come, Follow Me," another sweet reminder of what I'm supposed to be doing, to whom I look for guidance.  And then the program started.

It was actually kinda hard for me, watching those kids.  Aaron actually isn't around kids his own age much, not typical ones.  And even the youngest ones are more developed and advanced than he is.  There is such a huge gap between him and his peers.  Most of the time, I simply ignore it, but that wasn't working so well for me yesterday.

Then they sang "I Will Follow God's Plan for Me," and I really struggled to hold it together.  Aaron's life is a gift and has a plan.  It's so very different than other kids' lives, but it's his and has so much worth.  And I'm supposed to maintain my composure through this??

When we got to Aaron's part, I was nervous and overwhelmed, and it was all I could do to push the button on the part he and I prepared together.  And his little computer voice rang out:


"I love Heavenly Father and Jesus, and being with my family."


And I hid my face as I put his computer back down, wiping the tears.  Each song continued to speak to me, although perhaps not the way others thought it might.  "I'll Walk With You" seems to refer to a handicapped child who can't walk or talk like others, but my thoughts turned to some of my students and other kids I've known who don't seem to quite "fit in" and I remembered again that I need to be there for them and with them.

I was so touched by the Spirit yesterday, so many reminders.  I will try to follow Him, to be like Jesus.  And I hope that as I do so, my life's plan continues to develop and unfold, and so grateful for Aaron's job in teaching me to feel His love for me.


My life is a gift; my life has a plan.
My life has a purpose; in heav’n it began.
My choice was to come to this lovely home on earth
And seek for God’s light to direct me from birth.
I will follow God’s plan for me,
Holding fast to His word and His love.
I will work, and I will pray;
I will always walk in His way.
Then I will be happy on earth
And in my home above. 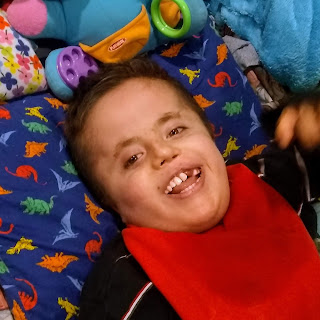 (Okay, this is already too long.  The "challenging part will have to be part 2.  Hopefully I get to it soon??)

Posted by CompatibleWithJoy at 5:33 PM