No Heart Cath (yet)

So today was supposed to be that day, the day Aaron went in, they put him under and threaded a small tube up through a blood vessel near his groin into his heart.  It was supposed to be today.  The day I've been worried about for the past month or so.

You know those back-to-school colds?  The ones that cause the sniffles and sneezes and coughs just a few days after everyone scurries out the door?

Well, this kid decided to get his out of the way early.  At least I hope that's what he decided and we don't have another waiting in the wings.

And for Aaron, a cold messes things up.  It messes up his heart, his lungs, his ability to tolerate anesthesia.  If you've ever had surgery, you remember the big form someone goes over with you regarding the dangers of surgery, the risk (teeny) of death, of having something else go wrong, or prolonged issues.  But in reality, it's a non-issue, we sign, we go on, and it's barely a blip on our radar.

But with Aaron, in addition to that talk, we also get the "and of course you know, that for Aaron, those risks are exponentially higher."  In our hospital, they have a minimum time you have to be in recovery before going home.  It's something like 90 minutes or so.  When he was younger, we'd hit a timer as he rolled into recovery and were on our way out the door when it went off.

But lately, it's gotten harder.

In April, we worked for several hours to get him stable enough to go home after his t 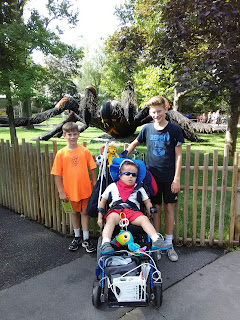 rach revision.  I thought we were there, we left.  And we came back a couple days later.  Didn't work.  That lovely combination of anesthesia, asthma and pulmonary hypertension.

Now throw in a cold, junky lungs, runny nose, and well, nope.  We weren't doing it.  Not yet.  Now the goal will be October 19th, during fall break, 'cause we just know how to party.

This last week has been a little intense.  But it's been intense here, at home.  We moved to doing breathing treatments and vest therapy every 4-6 hours.  His pediatrician put him on an antibiotic that's shown some promise in reducing asthma attacks due to rhinovirus.  We've bagged him, repeatedly, sometimes over the course of several hours.  I packed the hospital bag, and when I pulled things I needed out (toothbrush anyone?) I put it right back.  But we stayed HOME!!! 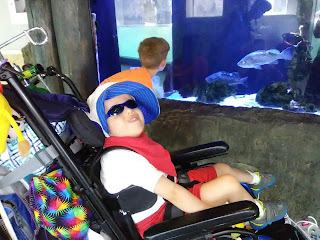 I channeled some of my nervous energy into making a few more onesies out of t-shirts my mother-in-law gave him.  I made several days worth of his food to freeze (you know, in case we didn't stay home).

And then as he started to turn the corner a bit, we ventured out.  He went to all three days of a soccer tournament, although the first day had me bagging him at the field.  Got some strange, worried looks on that one.  Me, I was more worried about the big, dark clouds overhead that ended up clearing the games for an hour.

He went to a couple parades, complete with noise cancelling headphones.  He waved at the ambulance, and I told him not to be getting any ideas. 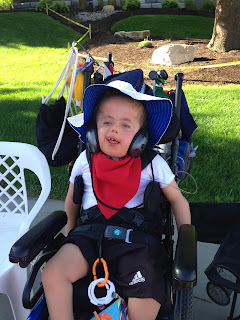 Yesterday we went to the zoo where he saw elephants, fish, and a giant (fake!) spider.  Yep, I think we got this.

Tomorrow we've got another soccer tournament, a picnic, and we start the rounds of back-to-school visits.  He starts next week.  It's all good.  It's very good.  And we'll tackle the heart cath and the anxiety that goes with it later.  Enough later that I'm not even going to think about it for a while.


Life consists not in holding good cards but in playing those you hold well.
Josh Billings


Posted by CompatibleWithJoy at 9:05 AM