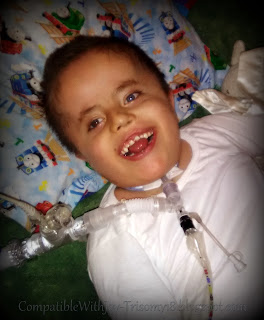 As I sit here on a Sunday morning, helicopter blades echo their "whomp-whomp" against the mountains. The house is sealed up as much as we can, and there is a sign on the front door asking visitors to please go around to the back.

See, the mountain is burning.  Yes, our mountain.  Yes, again.  Halfway between where it burned five years ago  and three weeks ago.  While we hope it won't be quite as bad as the first one, it's definitely more than the second.  When I went into the garage this morning, I could smell the smoke in there, and outside it's more like when you're standing near the campfire, and the wind is blowing towards you.  Yeah, not so good for already sick lungs.

We're not in California, we're in Utah, so while the fire is pretty close, (last night's nurse could see the glow of flames through the blinds) we're not in danger from the flames.  But emergency asthma protocols are being implemented and this kid isn't leaving the house unless he has to.  Sigh...


July has been a bit challenging so far. It's been good with family reunions and all, but we've also had a really nasty stomach bug rolling through the house, and Aaron has never been one to want to be left out of the fun.  Fortunately, a stomach bug with a g-tube and nissen and diapers is much easier to deal with than it is with a typical child.  It's just the rest of us have had it, too.  No bueno.

He did get to go out to the big parade on the 4th, and Daddy figured out how to stave off those awful noises that cause him so much trauma:  noise cancelling headphones.  And he kept them on!  Score!!

He's also been to the water park and pretty much just had a great time wherever he's been.  We head up to the hospital on Thursday evening for a slumber party (aka sleep study) to make sure his ventilator settings are where they should be.

And that med we tried to stop?  Yeah, "tried" would be the important word.  It didn't work so well.  I figured we'd know better by the weekend, and oh boy, did we.  I ended up having to bag him a few times that Saturday and Sunday in addition to putting him on 12-15 liters more than once.  So he's now back on it.  We may try to change it out for another one, we may try one more time to take him off even slower than before.  But for now, until he's had both his sleep study and his heart cath in a few weeks, we're leaving things just as they are.  I need him to be status quo so that whatever the studies show, it's with him at his baseline, not with other systems messed up and playing with the numbers.

Fun times, huh?  At least this kid keeps smiling, and reminds me to keep smiling, too.  After all, isn't the joy what really matters? 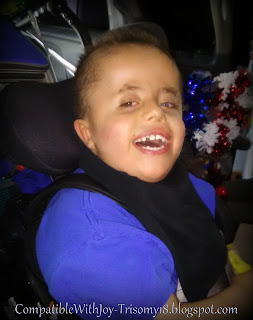 “Very little is needed to make a happy life;
it is all within yourself, in your way of thinking.”
– Marcus Aurelius

Posted by CompatibleWithJoy at 12:06 PM