A New Angel for Christmas 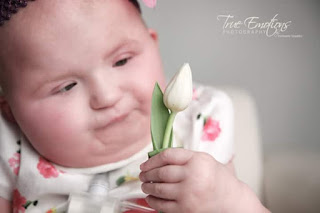 My heart is broken.

Sweet Lily was almost four weeks older than Aaron and like him in so many ways.  Lily didn't have Trisomy 18.  Her genetic makeup was so individual that her doctors referred to her challenges as "Lily Syndrome."  But both kids were trached and vent dependent with crazy oxygen needs.  One day high, another low.  Both of these kids could swing from doing amazing to rushing in within minutes. 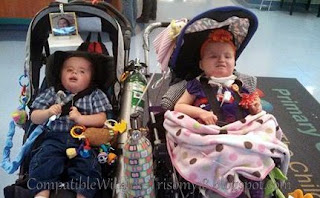 I can't even remember when and how Danielle and I connected.  It seems like she's always been there.  And "there" was often in the hospital.  We weren't often in the PICU together, but we'd pass as one was brought in and the other sent to the floor.  We spent enough time as neighbors on the same floor unit that we joked about putting in a window between our rooms, or even a door, much better!

There is a favorite cookie of mine up there, it has chocolate chips, coconut, oatmeal and macadamia nuts.  I found one in my room one morning and the nurse wouldn't tell me where it came from.  I knew it was Danielle.

She was there three years ago (right next door where we wanted to put in that window) when Aaron finally turned around a bit, gathered some energy, and serenaded the unit after being in really rough shape and sleeping 22 out of 24 hours for several days.

There was a time when Aaron was in with a cold and Lily was there already.  We were on the floor, but not doing well.  His doctor kept popping in and out of the room.  (That's not a good sign, you don't usually see them between rounds unless there's a problem.)  I knew Lily wasn't doing great, either.  He mentioned that he had to go to a care conference for another patient, but he would be right around the corner and could come quickly if things deteriorated further. I figured it was Lily.  He did excuse himself from that meeting to check on a patient.  Danielle was certain it was Aaron.  We were both right. 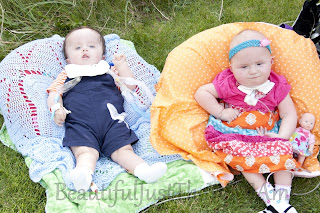 Lily cheated death so many times.  So many times the family was given "the talk."  When things like that happen over and over and over again, you kinda figure they'll keep on happening, with the same outcome.  They're sick, very sick, they rally, and life goes on.

Except not this time.  Her lung disease had progressed to the point where she wasn't going to "come back."  Her body was done, she was so frail.  Her spirit was strong, but her heart and lungs were just too scarred.  Danielle describes it as beautiful and peaceful.  I have no reason to think that it wasn't.  I also know beyond a shadow of a doubt that there is immense, indescribable pain.

I have been in tears since she first told me a few days ago that things weren't going to turn around this time.  There is a huge, Lily-sized hole in their lives, and in mine.  There will be silence where there was once the gentle hum of machines, and the quiet-breaking sound of alarms.  There won't be middle of the night feedings or trach cares to do.  There won't be breathing treatments, diaper changes, nursing schedules, supply orders.  There won't be snuggles and sighs and warmth.  They're all gone now.  All that was so much a part of every waking, and sleeping, moment of Danielle's life for the past six and a half years.

Lily is fine.  She's free, she's at peace.  They will see her and hold her and love her again.  That will come.  But for now, it hurts, it hurts beyond measure.  And I ache for my friend.  Her life will go on, but it will never quite be the same.


Grief never ends ... But it changes.  It's a passage, not a place to stay.  Grief is not a sign of weakness, nor a lack of faith ... It is the price of Love.
Author Unknown