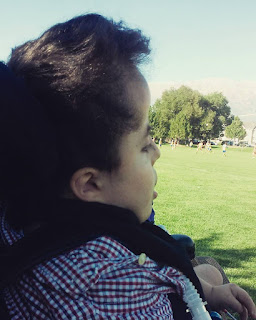 I keep meaning to find time to write, but even finding time to sleep has been a bit elusive lately.

We've had a soccer tournament, multiple doctor appointments, Make A Wish, back to school nights, a missionary farewell, and all sorts of "fun" with equipment (4, FOUR! concentrator issues this week alone).

But all in all, we're still truckin' along, moving forward (and losing my mind).

Aaron is doing relatively well.  We're back inside our surgery window, only five more weeks, which really can't come soon enough.  Poor baby keeps dealing with an ear infection in his right ear, the one that doesn't currently have a tube in it.  He's ruptured that eardrum four times now since the second week of July.  It makes for all sorts of fun with his oxygen.  See, when it hurts, he doesn't breathe well, doesn't oxygenate well, and we scramble to keep him home.  So far so good, but I'll breathe better myself once we can get this taken care of. 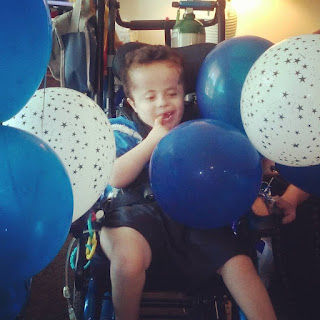 School starts tomorrow for the public school kids and the college kids move out on Wednesday.  Aaron even has a nurse, so he gets to start tomorrow, too.  First time in 25 years I haven't had a kid home at least half the day.  Can't wait to see how this plays out.

Make A Wish came in last week and installed a big screen TV along with a bunch of peripherals that he is absolutely LOVING!  He gets so excited for movies and Sesame Street.  They also brought balloons, one of his very favorite things in the whole world.  So much fun! 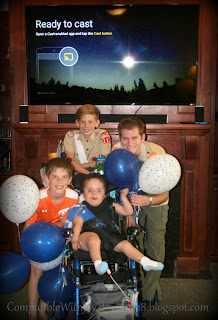 He made it to the Alpine Days Parade again, hasn't missed a year yet.  But side effect of his ear surgery in March where they opened up his ear canal is that he is hearing better.  And with that increased hearing comes a not so fun part where the loud noises scare him.  While he loves the guys at Lone Peak Fire, he's not that fond of their sirens.  Big crocodile tears...

On another note, I had an interesting experience at  the middle school during back to school night this week.  While we were waiting for a teacher to finish visiting with another parent, a younger sibling of that student came up and in a somewhat loud voice exclaimed, "I like his face!" 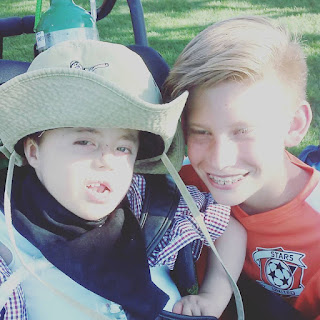 I was a little taken aback.  His face?  I couldn't figure it out, and I wondered why Mom wasn't intervening.  I remarked that he was a little tired, but he liked making new friends.

She went on and asked how old he was.  I told her and she announced that she was almost eight.  I asked when her birthday was, and she told me.  About that time I realized something.  Well, two somethings. 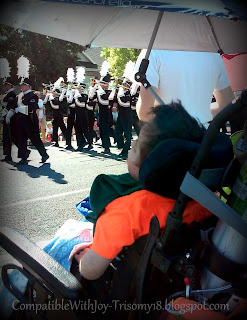 She apparently has her own challenges.  She was all sorts of excited as she described her upcoming party, but her words and gestures were much closer to two or three than almost eight.

And I was guilty of assuming the negative.  I thought she was making fun of Aaron, or something else like that.  She was simply an excited little girl who was probably bored with the evening (I know my kids were), who wanted to make a new friend.  And she was much more open-minded and open-hearted than I was.  As she left, I wished her a very happy upcoming birthday.  I hope it's all she dreams it will be.

And I hope I remember the lesson she taught me.

"An open mind leaves a chance for someone to drop
a worthwhile thought in it."
-Mark Twain

Posted by CompatibleWithJoy at 6:58 PM