Not a Quick Fix 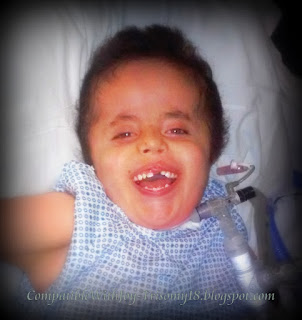 I guess I figured since we managed most of his cold at home, this might be a quick little bump and we'd be right back where we were.

Um, not so, it seems.  He did really well for the first 12+ hours after we got him stable.  In fact, well enough that I dreamed of busting out of here bright and early today.  Fast, quick, easy-like.  But yesterday afternoon when we were between ten and 12 liters, I figured we might need to stick around for most of today.  This morning, we were back down to three, and I thought, well, if the day goes like that, we're still outa here, just not quite so early.

Except, it didn't.  Within a fairly short time he was above our five liter threshold.  And then more, and some more on top of that.  It was only for about 15 minutes, but he ended up back on 12 liters again, and has spent most of the day at eight or above.  Yep, much too high for a ticket out of here.

In fact, at one point, they started suggesting he might head back downstairs to the PICU.  (PICU is 2nd floor, the "floor" is 3rd floor for us.)  I got in his face and informed him that the only trip downstairs he needed to be thinking of was the one that was two floors down and then out the door.  One floor was not acceptable.  He grinned, and then cooperated, a little bit.

So we're here until his lungs can relax.  It's really right on schedule.  His pulmonary hypertension always gets worse five to seven days into a cold.  But I let myself get my hopes up, so it seems a little harder.

But there are bright spots, too.  I got to spend time with a new Trisomy mama today.  I love making new friends.  I love seeing old ones, too, like the one across the hall whose kid also thinks it's funny  to bounce up and down between the floor and the PICU, and another heart mom who gave me a ride home today.  Plus one who's coming to feed Aaron tomorrow and Sunday (if we're still here) so I can spend some time at home.  See, because we're bringing in our own food, the hospital can't give it to him.  Liability issues and all.  Either I have to do it, or I can ask another non-hospital employee adult to do it.  But staff here can't do it.

So lots of interaction with some really neat people, including great staff members that I'd really, really like to figure out how to see socially instead of professionally.

And bonus, someone, my son won't say who, dropped off some treats for me.  He came out as I was leaving and said he wasn't allowed to say who.  Whoever you are, I've already enjoyed some of them.  Nothing like a little chocolate to brighten up a day.

So we'll make it.  It just won't be quite as easy as I was hoping it would be.  Slow and steady wins the race, right?  And besides, Aaron thinks it's all a grand party anyway.


If one dream should fall and break into a thousand pieces,
never be afraid to pick one of those pieces up and begin again.
~Flavia Weedn
Posted by CompatibleWithJoy at 12:15 AM