It's Christmas Eve, and there's lots of "stirring" going on around here.  Although in truth, many of the olders are still sleeping.

We've had our requisite medical issue, but this year was much more manageable than last year's.  Last year, Aaron and I Lifeflighted on the 23rd.  Some friends of mine did last night, and many others are in the hospital as well.  But we're at home.

No, this time it was Michael vs the tree on the sledding hill.  He's broken his right thumb, but it's in a brace and he's doing pretty well.  I'll take a visit to the ped and an x-ray at the hospital over a Lifeflight and PICU stay Any. Day.

Most of the presents are wrapped, most of the baking done.  I've got a few minutes to sit and reflect.

Santa pictures seem to be a part of each year.  Even Aaron's first year, tiny and fragile and oh so tenuous, I managed to get pictures.  But this year we were in the hospital for one of the parties, and we decided it simply wasn't worth the risk to take him to the church party or find another Santa.  I mean, four pneumonias in five months will make anyone a little gun shy.

But then a friend had a "connection" to Santa.  She put a bug in his ear and guess who showed up on our porch on Monday.  Yep, the big guy himself.  Such a sweet blessing.

It's been a tender time for me.  During our last admit, another friend mentioned that this was their very last admit.  There's only one reason you can say that in the medically fragile world.  And her sweet Izzy went Home last week.

The day after she passed, another little girl, active, vibrant, full of life died, too.  Unlike Izzy, Jalyssa's death was due to the neglect of the nurse that was supposed to be caring for her.  Her trach came out, she wasn't attached to monitors, and by the time the nurse noticed, it was too late.  Heartbroken over Izzy, I was devastated for little Jalyssa's family.  But in addition, I was angry and scared, too.  We trust others with our children's lives when we can't be there.  And when basic precautions, fundamental protocols are ignored, life as we know it changes in an instant. 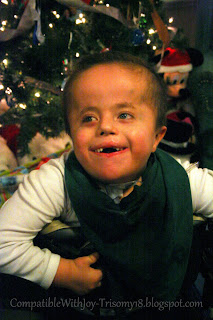 So I hug my children a little closer, a little tighter.  Try to be a little kinder, more understanding.  Aaron is doing well under house arrest.  He got a gait trainer to help him learn to bear weight, and hopefully even take some steps sometime in the future.  He rocks out to the music anytime he's in it.  He laughs, he smiles, he breathes.  And I treasure every moment.

Only a few things are really important.
~Marie Dressler
Posted by CompatibleWithJoy at 9:52 AM